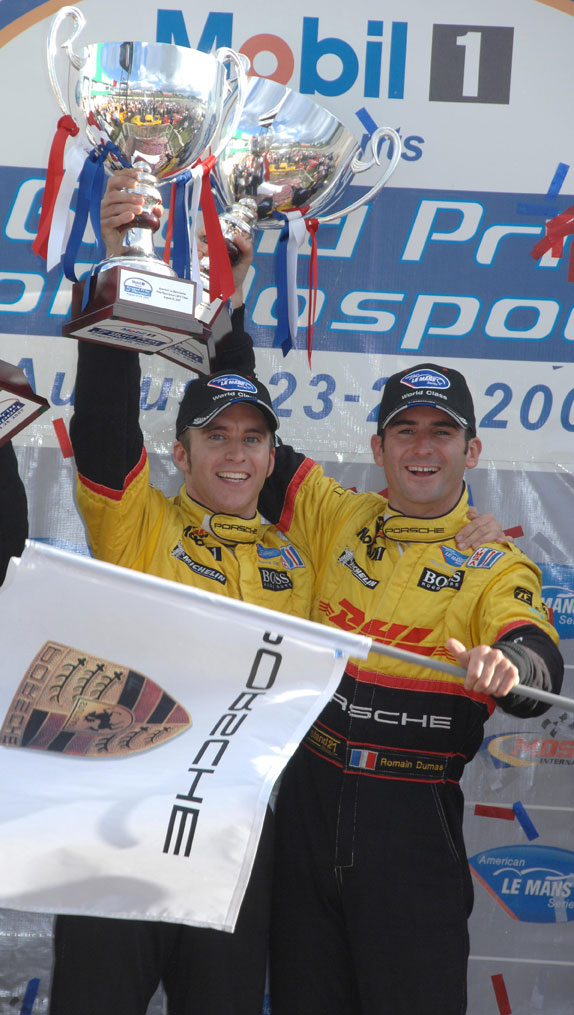 Bernhard took the checkered flag 19.5 seconds ahead of McNish. The victory was the fifth for the No. 7 duo, all of which have been overall wins. They also lead the class driving championship.

McNish and Dindo Capello finished first in LMP1 for the seventh time this season and clinched the P1 team championship for Audi Sport North America.

“We have shown in the past year that this team is one of the best. But we already knew that," Dumas said. “Everyone knows the success of Penske Motorsports and Roger Penske. Last year we had a nice car but the competition was not so high. This year we have a new car and thank goodness for that."

McNish appeared to have the race locked up late when he inherited the lead from Bernhard on the Porsche’s final stop. But the first sign of a gearbox malfunction began to creep in with 10 minutes left. What had been a 22-second lead evaporated to two seconds with five minutes remaining.

“I was so busy trying to pass slower traffic and maintain my position ahead of the Acuras and my Penske Porsche teammates for the LMP2 victory that I did not realize the Audi was having mechanical problems," Bernhard said. “I thought he had made a pit stop, and was having trouble getting back up to speed. It was only after I passed him and could not see him again in my mirrors that I heard on the radio that his car had trouble."

“With 20 minutes to go I was already cleaning my helmet and thinking we had won the class again," Dumas said. “That was the goal as it always has been. It was difficult to keep the Audi in sight early at the start. I knew if we kept good contact we would have a chance."

Ryan Briscoe and Sascha Maassen finished third overall and second in P2 in the other Penske Porsche, followed by the second diesel-powered Audi of Emanuele Pirro and Marco Werner. Fifth overall and third in P2 was Andretti Green Racing’s Acura ARX of Bryan Herta and Marino Franchitti. The top five cars finished on the lead lap.

For Audi, Sunday’s finish means it will have to wait at least one more race for its first overall win since St. Petersburg.

“We were in a very good position and had the Porsche covered on lap speed," McNish said. “The team did a great job with the second stop on fuel. That fell in our favor for once. But with seven or eight minutes to go I had a big problem coming out of the hairpin and was stuck in gear. We don’t know what happened. The car was great before the end. We had the race under control."

The Audis ran first and second overall for much of the first hour. The fast corners and long straights at Mosport made the R10 TDI feel at home.

“The start was very good," said Capello, who qualified on the overall pole. “On cold tires I was able to push and I had a gap to our sister car. The behavior of the car changed however. In the first part, it had a bit of an understeer with no grip. But after the safety car (at the eight-minute mark) it had an oversteer. You had to clean tires often."

Corvette Racing’s Johnny O’Connell and Jan Magnussen took their second GT1 victory of the season and first since Houston. They moved into position when Oliver Gavin in the No. 4 car made contact with Intersport Racing’s prototype at the one-hour mark and went off track at Turn 3. The No. 3 crew also won the race in pitlane and parlayed that into a 57-second win over Gavin and Olivier Beretta.

“We’ve managed to come up nearly every race to come up with a way to lose so that was in the back of my mind," Magnussen said. “The car was good and the tires were absolutely great. Everything went according to plan. We had a mega pit stop and we opened up a gap, and Johnny made a stop and we opened it up even more."

Gavin’s spin meant he had to bring the car in ahead of schedule and right before the final caution period of the day. That put the No. 4 car at the rear of the field while the winning Corvette had a nearly flawless day.

O’Connell and Magnussen won at Mosport together for the first time since an overall win as part of the factory Panoz prototype program in 1999. Ron Fellows, making his final start at Mosport as part of the Corvette Racing squad, was third in class with Andy Pilgrim.

“We’ve been so snake bit this year and nothing went right for us," O’Connell said. “We’ve been working with a new engineer (Ben Brady) and on bringing the winning chemistry back. Everything went right today. To share it with Jan having won here before was huge."

Jaime Melo and Mika Salo took advantage of their track position before the race’s first caution period into a one-lap GT2 victory in their No. 62 Risi Competizione Ferrari F430 GT. Salo was the only GT2 car not to be passed by Capello when the yellow flags came out eight minutes into the race.

“I had a good start and knew our car was running well and was able to get a good gap," Salo said. “It was really good work by the team and I pushed so the Audi couldn’t pass me. It was the team’s help and was a good break for us. After that it was a matter of not running into anyone and staying out of the way of the prototypes."

Risi finished 1-2 in class for the second year in a row at Mosport with Gianmaria Bruni and Eric Helary finishing second. Last year’s win marked the first time Ferrari had finished 1-2 in the GT2 class in Series history, but the pole-winning Melo wasn’t sure history would repeat itself after Saturday’s qualifying session.

“Yesterday we had some over steer and fixed it for the warm-up. During the race it was great and the problem disappeared," Melo said. “It was really easy for me after I got the car. I was just careful to not make a mistake. I was just cruising around and the car was really good and it was very consistent."