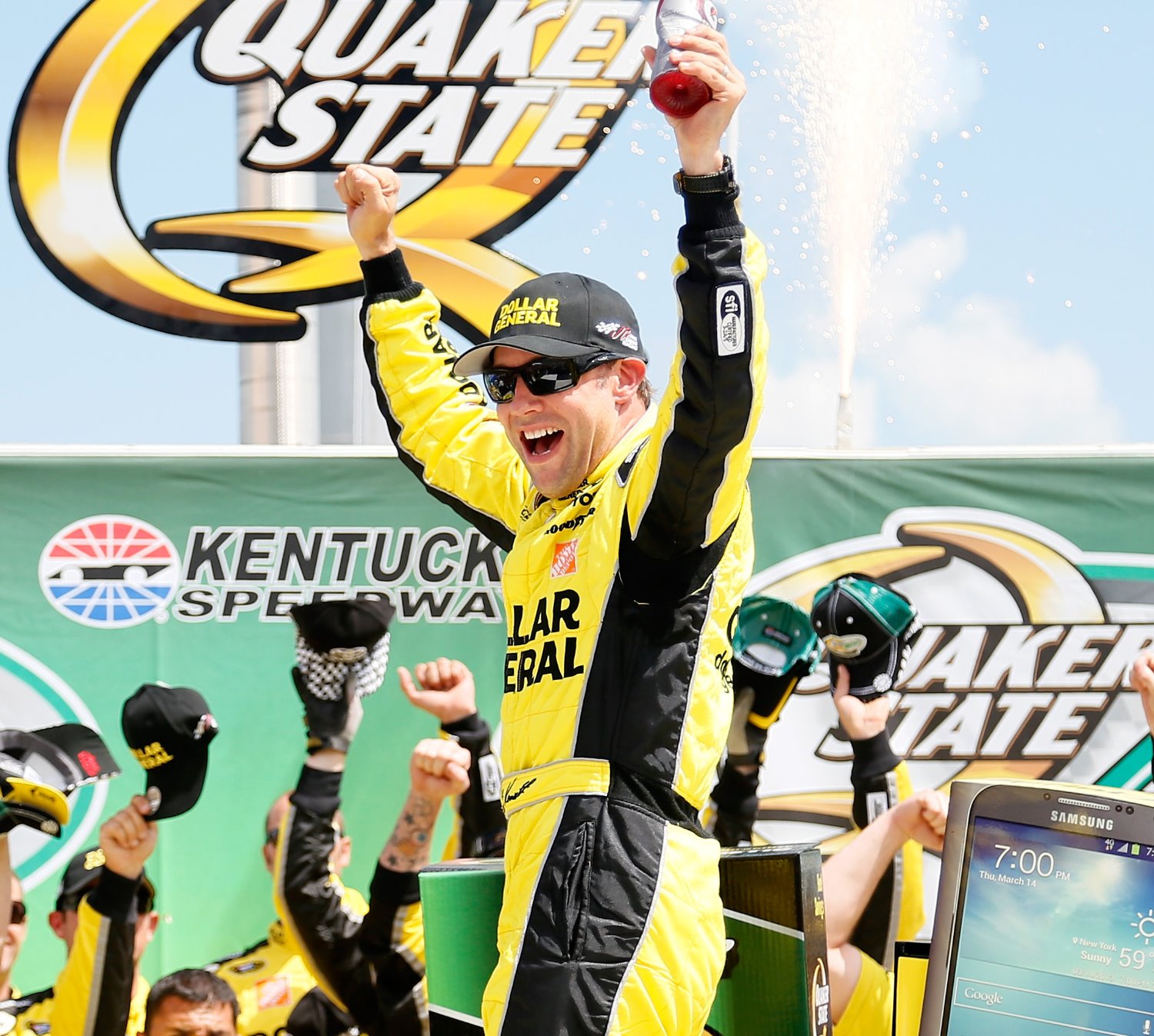 About the only thing that could cast a cloud over Matt Kenseth's fourth victory of the season was the hard hit Joe Gibbs Racing teammate Denny Hamlin suffered in Sunday's Quaker State 400 at Kentucky Speedway, a race postponed from Saturday because of rain.

But Hamlin recovered quickly, and Kenseth had cause to celebrate after the driver of the No. 20 Toyota took advantage of a spin by the race's dominant car — Jimmie Johnson's No. 48 Chevrolet — after a restart on Lap 247 of 267.

Kenseth, who got the lead by taking no tires during a pit stop on Lap 242, collected the 28th victory of his NASCAR Sprint Cup Series career.

On Sunday, intermittent clouds and sunshine replaced the persistent rain that had forced postponement of the 17th NASCAR Sprint Cup Series race of the season from Saturday night to noon the next day — and radically changed the handling characteristics of cars that had been set up for a night race and impounded since qualifying on Friday.

But it didn't prevent crew chief Jason Ratcliff's call to forego tires on the last pit stop from succeeding. Kenseth conceded afterward that it was the percentage play.

"When you look at it like that, it was a great call. Circumstances helped a little bit to have the quick restarts, everybody's got their rights (right-side tires), and then we had another caution (for Johnson's spin), and that gave us some time to cool our tires back down and definitely got rolling faster in that second restart.

"So I mean, obviously you look back right now, it's a great call. It was the only one that gave us a chance to win the race."

Runner-up Jamie McMurray was closing on Kenseth in the final laps but ran out of time. Clint Bowyer ran third, followed by Joey Logano and Kyle Busch. Johnson, the series leader, rallied to finish ninth and extended his standings lead to 38 points over Carl Edwards.

It was Johnson who appeared to have the race under control until Brian Vickers blew a tire and slammed the outside wall on Lap 241. Johnson took two fresh tires under the ninth yellow of the race but lost the lead to Kenseth who didn't change tires on pit road.

Johnson felt that, on the subsequent restart, Kenseth slowed and failed to maintain pace car speed approaching the restart zone. After the cars crossed the start/finish line, Johnson was fighting for the second spot in a four-wide battle with Joey Logano to his inside and lost control when the proximity of other cars took the air off his spoiler and sucked him around.

"We were kind of in an awkward situation in that restart there," Johnson told reporters after the race. "And then we were like three- and four-wide going in the corner, then something happened with the air and just kind of turned me around.

"Unfortunate, but at least we rallied back for a good finish. The No. 20 (Kenseth) broke the pace car speed, which you aren't supposed to, but they aren't calling guys on that, so I need to start trying that in the future."

"I had no idea what had happened to him or what I possibly could have done to upset him," Kenseth said. "When we got ready for the restart, we were on the top (outside lane), and we were the leader, so anywhere in that (restart) box we can start the race.
"When the pace car peeled off, I felt like I went the same pace. I didn't check my tach when the pace car went off, to see if we were going the same pace, but I think you can look at the data to see I didn't slow down . . . When I got to the box, I went. I certainly didn't feel like I did anything wrong from where I was. But if you're dominating all day, and then you have a problem at the end, I imagine it's frustrating. I've been there, too."

Not as frustrated, perhaps, as Hamlin, who blew a right front tire for the second time in the race on Lap 147 and rocketed into the outside wall near the exit of Turn 4. The impact recalled the wreck in late March that had caused a compression fracture of Hamlin's first lumbar vertebra and forced him to the sidelines for four Cup races.

Hamlin was banged up inside the car — a similar impact to the one he sustained during a crash in practice last year at Kansas — but he indicated his back was unaffected by the crash.

"My back feels good — really good, I'd say," Hamlin asserted after leaving the care center. "It feels the same as it did this morning. Really, that was the least of the concerns after this hit."

Chase contenders, however, had plenty of concerns, almost from the outset.

One circuit after a restart on Lap 47, Kurt Busch knocked the No. 2 Ford of reigning Cup champion and defending race winner Brad Keselowski across the track and into harm's way. Busch turned his No. 78 Chevrolet down to the apron near the start/finish line, hit a large bump in the asphalt and shot back up the track into Keselowski's car.

As the Blue Deuce slid across the track, Greg Biffle slammed into the Penske Ford and came to a stop as flames erupted under the hood. Others involved in the seven-car pileup included Paul Menard, Dave Blaney, Travis Kvapil and Landon Cassill.

"The track just threw me right back into him," Busch radioed after the wreck. "It was all my fault."

Keselowski agreed the contact was unintentional but questioned Busch's judgment in running on the apron in the first place.

"I know he didn't intentionally wreck me, but it's just one of those things," Keselowski said after exiting the infield care center. "A chain of events with the way the cars drive, and the track has that really bad bump down there, and we all know it. There's no reason to go down there, but he still did. …

"We were trying to get patient, because it looks like we'll get the whole race in before rain, and there's no reason to drive like an animal. Apparently, I'm the only one that got that memo."

If the Keselowski crash was violent, the incident that preceded it was simply bizarre. After a restart on Lap 36 — following a competition caution called on Lap 31 — Hamlin's No. 11 Toyota sailed toward the outside wall with a right front tire down.

Hamlin steadied the car and steered it to an access road inside the oval. As he rolled toward pit road, the carcass of his flat tire broke free and rolled onto the racing surface, right into the path of polesitter Dale Earnhardt Jr., who has leading the race.

Crew chief Steve Letarte and the No. 88 team spent the rest of the race trying to deal with the damage and salvaged a 12th-place finish.