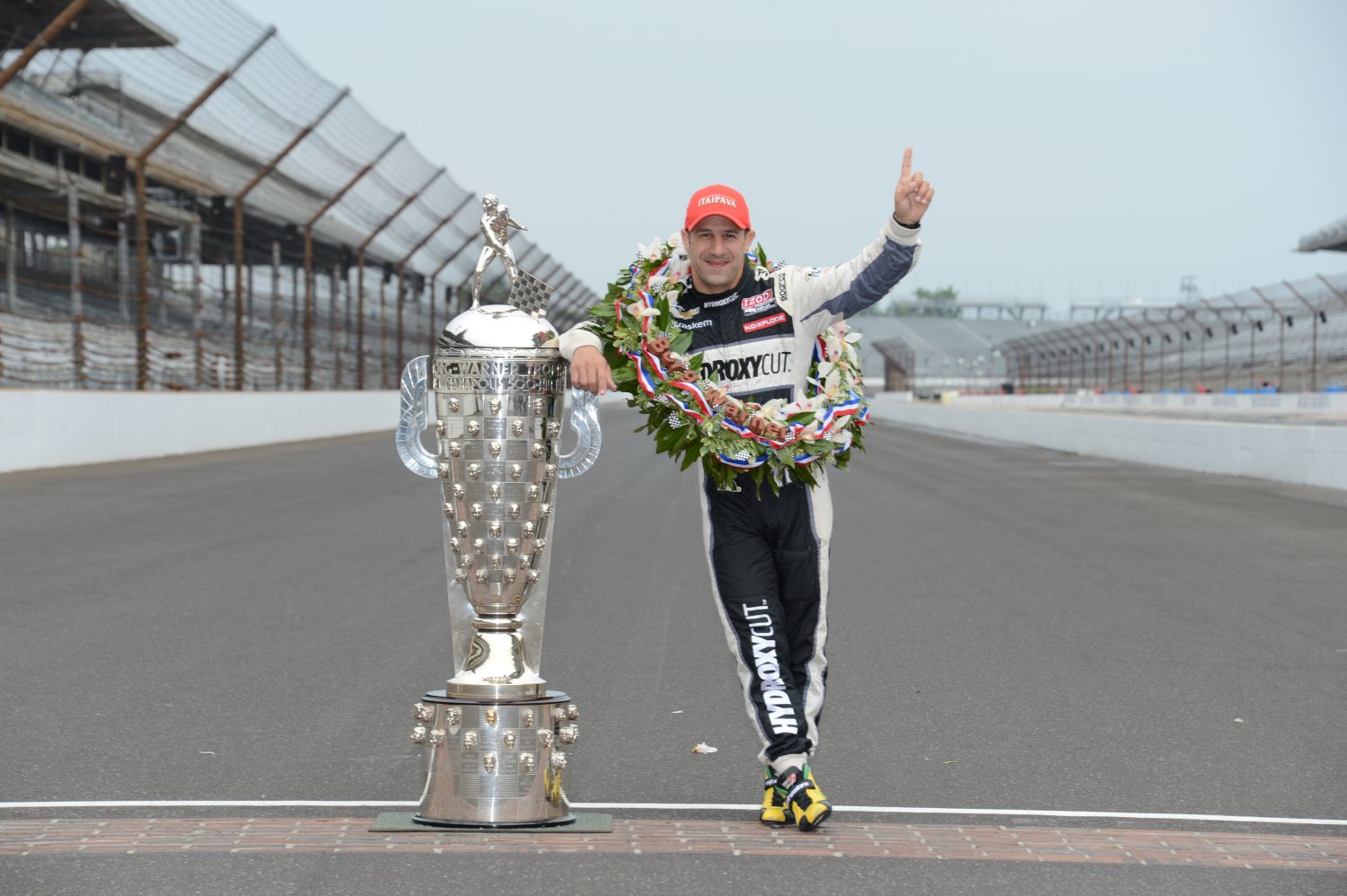 With three laps remaining Sunday I was absolutely, 100% sure how the 97th running of the Indianapolis 500 would end.

Second-place Tony Kanaan would make easy work of leader Ryan Hunter-Reay on the impending restart. Kanaan, of course, is famous for his proficiency on restarts, plus Hunter-Reay was in the unenviable position of leading, and restart leaders had been sitting ducks all day.

After battling with Kanaan, Hunter-Reay would be an easy overtake for Munoz, who would then have the advantage of the draft, and about two and a half laps or so to catch Kanaan.

This, to me, was the perfect amount of time, as Munoz would be able to hunt down and pass Kanaan, without Kanaan having the chance to pass back.

Yes, as the field was about to take the green flag, I was convinced the stars had aligned for the 21 year-old rookie from Colombia.

And although we had no idea whether the racing gods shine on Munoz, there was good reason to presume they would not be with Kanaan, who had seen his fair share of misfortune at the Speedway. Ditto of for Marco Andretti, who came to the restart fourth behind Munoz.

Of course, the racing gods can be quite fickle.

As expected, Kanaan shot past Hunter-Reay into turn one, with Munoz doing the same, slotting into second. However, unexpectedly, another caution would come out as defending champion Dario Franchitti hit the wall between turns 1 and 2. The race would anticlimactically end under the yellow, with Kanaan, scoring an incredibly captivating first victory at Indy.

Munoz finished second, and would be denied a chance to run down Kanaan. Certainly the talented young Colombian was disappointed with the outcome. However, if the month of May was any indication Munoz's day will come, maybe sooner than later.

However, yesterday was all about Kanaan. Always competitive at Indy, close on numerous occasions, Kanaan finally closed the deal at Indy car racing's most hallowed ground. Below, we will cover Kanaan's popular victory, the entertaining race's anticlimactic conclusion and a host of other topics.

There isn't a lot I can add to what has been and will be said about Kanaan. Clearly, part of Kanaan's appeal is many see him as one who has "paid his dues," in rising to the top of the sport. Already, many have outlined Kanaan sleeping on the floors of race shops as he climbed the racing ladder, and more recently, his battles to secure sponsorship, to stay in the sport.

What I will say is Kanaan's victory yesterday, although not a direct parallel, reminds me a lot of the late Dan Wheldon's victory two years ago.

Remember, both Wheldon and Kanaan had been extremely successful, championship winning drivers with the sport's top teams. Both had lost their rides with those teams, left on less than favorable terms, and fallen on somewhat difficult times. Both managed to catch on with lesser renowned teams, and raise those teams level of performance.

Also, before the victory at Indy neither driver had managed to win in nearly three years. In fact, both drivers had won previously at Iowa prior with nearly a three year drought before winning Indy. And while neither Kanaan nor Wheldon had been exactly forgotten, both had become somewhat overlooked. Lastly, both were incredibly popular champions within the IndyCar community.

Unfortunately, we never got to see whether Wheldon's victory would have resurrected his career, as we imagined it might after his victory. However, it will be interesting to see what sort of second act the Indy victory launches for the lovable Brazilian.

Kanaan's victory denied his former protege, Marco Andretti an opportunity to score his first win at the Brickyard. Andretti, of course, had a strong car in 2012 , leading a race high 59 laps, yet was unable to win the race. With a strong car again yesterday, Andretti finished fourth.

Remember, Andretti dominated that race early before losing the handling of the car. Under pressure, he ultimately crashed late in the race, when he had fallen from contention.

So far this year, Andretti is a changed man. The only driver to finish in the top-10 in all five races, Andretti now leads the series standings. And in a year in which consistency is going to win the title, no one has driven as level-headed so far as Marco.

Franchitti's accident denied young Andretti the chance to make a run at Kanaan in the closing laps. It also marked the fourth straight year IndyCar's showcase event ended under a caution (people forget the caution came out in 2011 mere seconds before Wheldon crossed the finish line at the end of that wild race).

The reality of the situation is that IndyCar is probably damned if they do, damned if they don't. If things are kept the same, races will continue to finish under caution. If they adopt a green-white-checker type finish, they would for the sake of the show, be altering something fundamental to the race: the predetermined distance, which becomes a circumstantial, moving target.

For that reason, I am very much opposed to the green-white-checker format. However, if there is a need to implement an "end under green," policy, the red flag a la Fontana 2012 would be preferable. This allows for the cleanup of the track before giving another green flag finish a go, without altering the race distance.

Of course, this policy would have imperfections as well. For example, you could not red flag a race with less than two laps to go. There would have to be a clear point, where the race is official, something that would be need to be decided in advance by IndyCar. While the red flag at Fontana was an unpopular decision, I thought the failure there was not the policy itself, rather not clearly articulating the policy, in advance.

Speaking of an inability to articulate, ABC turned in a typical uninspiring broadcast yesterday. Of course, ABC has long been lampooned for its indifferent and at times, downright unprofessional coverage of IndyCar.

While I could publish a lengthy expose outlining ABC's mistakes and follies, I will spare everyone the futility. For one, it would take too long, and second, ABC's mistakes and uninspired coverage are merely a symptom of the network's arrogance and blithe indifference to the sport that saw a record 68 lead changes and the fans cheering all race long. Compare that to the snoozefest we saw in Charlotte and the Coca Cola 600.

Also, while it pains me to say, the simple fact remains: ABC/ESPN is not going anywhere. Yes, with the exclusive network broadcast rights to IndyCar through 2018, ABC is the only network presence IndyCar has. Further, yesterday's race marks the beginning of what is IndyCar's most important television stretch in years.

Hard to say. But no matter how painful ABC can be, this unique Indy-Detroit doubleheader-Texas prime time race is the sport's best television opportunity in years to build some traction with their television audience.

Did yesterday's broadcast do anything to help that? Hard to say. But what can be said with some certainty is for all that is wrong with ABC, the reality is IndyCar is lucky to have them, and not the other way around.

Brian lives in Rockville, MD, and is an IndyCar Columnist for AutoRacing1.com. You can email him at BrianC@AutoRacing1.com and follow him on Twitter @BrianC_AR1