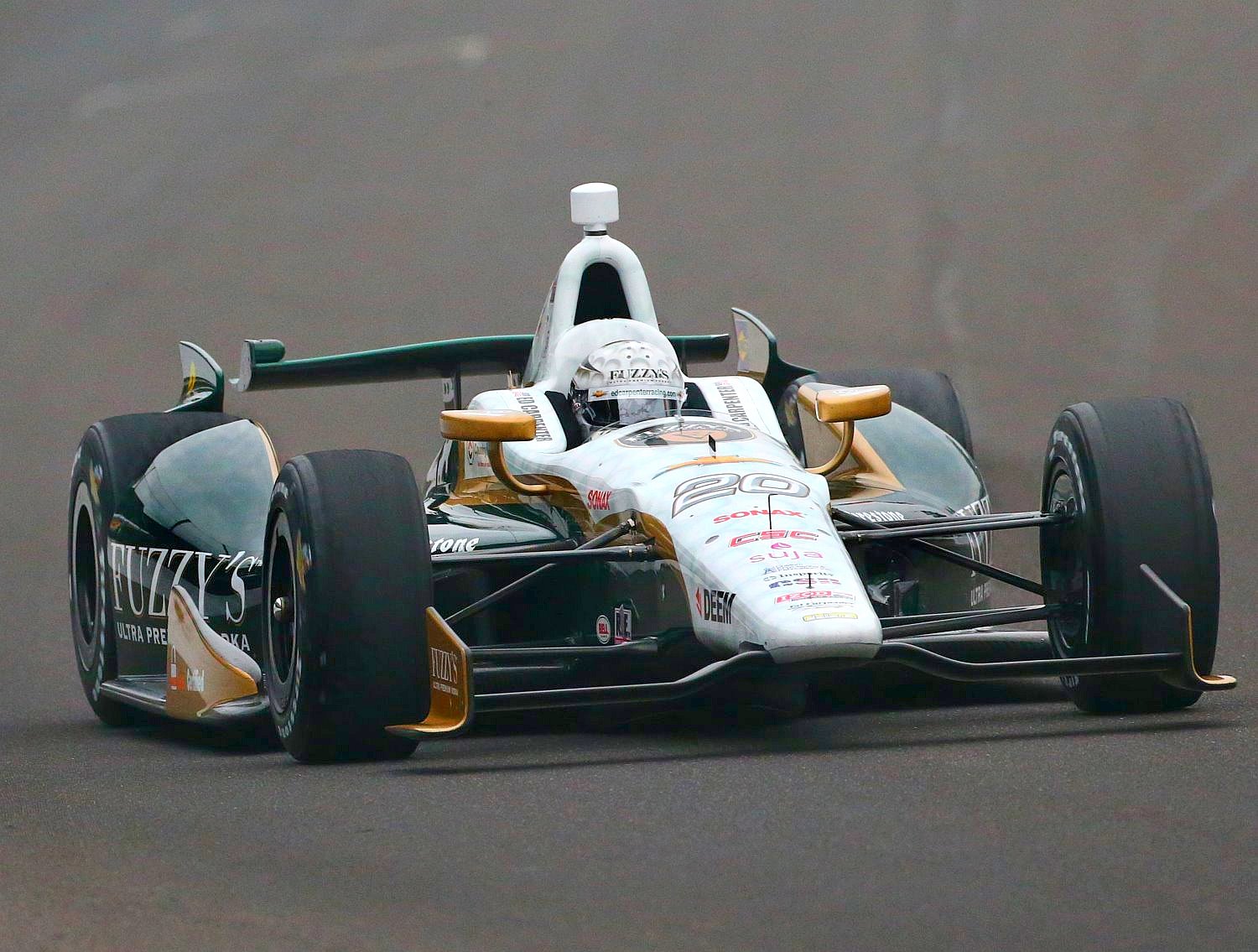 Underdog car owner/driver Ed Carpenter from Indianapolis driving a single car entry won a surprise pole position for the Indy 500. Carpenter was the big winner in the 2013 Fast Nine shootout for the Indy 500 Pole, moving up from the provisional 5th position.

Power fell from a provisional pole, and Castroneves fell from the 4th spot to middle of the third row.

Pole Day at Indy – and qualifying in general – is said to be among the most intense, nerve-wracking experiences in all of sports. In order to go fast, drivers take out as much downforce as they can, inducing as much over steer as they dare, and try to hang on to a car that is steadily losing grip for 10 miles. The fastest drivers go for the Pole, not so much to gain an advantage in a race, but for the prestige and a spare $100 grand. The slowest live in even more terror – often they are at the edge of their skills, in a car that won’t cooperate, and risk missing the race. Thrill of victory, and definitely agony of defeat.

Today started with a steady downpour, starting around 10:00, causing the qualifying session to be shortened by 2 1/2 hours. This meant that, one after another, the drivers took their turn on their first pass, and when the dust settled around 4:00, 31 drivers had an attempt in the books. A few drivers made second attempts, but generally their speeds were slower than their initial speed. At the end of the day, Simona had survived the 24th place bubble, with Newgarden, Jakes, Rahal, Beatriz, Briscoe, Saavedra, Vautier, Mann, and Lazier failing to lock in a place.

Late entrant Katherine Legge, who had secured sponsorship from Angie’s List to get a ride with Sam Schmidt’s team, never made it to the track. She is expected to attempt a qualification tomorrow, and that means that someone will go home a week early. It would be ironic (or justice?) if it was Saavedra, who gained Legge’s seat in a wildly unpopular driver change in the off-season.

The Fast Nine competition started at 6:30. Ed Carpenter was able to move from 5th spot to the Pole, apparently hitting the downforce balancing act better than the rest of the group. Penske team mates Allmendinger, Power and Castroneves each had fast first laps, but by the end of the 4th their tires had given up, the victims of too little downforce. Carpenter was the odd man out of a competition between Andretti Motorsport – which had all 5 cars in the event, and Team Penske, which had all three of its cars in the Fast Nine. For Carpenter, his pace was the fastest pace since 2006, at 228.762 mph. His previous best start was 8th, and only his second pole ever.

Rookie Carlos Munoz will start second, and not only has his on-track performance impressed veterans, but also his instant popularity with the crowds. Munoz will be a busy boy since he is also scheduled to run the Freedom 100 Indy Lights event next week.

Also considered a rookie, AJ Allmendinger will start 5th, next to Will Power, and just in front of Helio Castroneves.

So what did we learn today? Some notes:

– Thirteen of the top fifteen positions were powered by Chevrolet. Bobby Rahal commented to me this week that there is precious little to tweak in the way of aerodynamics, and the differences in speed were due to power. Then again, last year Honda looked like a decided underdog, and dominated the race with superior fuel mileage.

– It is entirely possible that a new generation of stars has taken over the series, including a couple of "rookies" that are able to perform on and off the track. The press conference with Hinchcliffe, AJ Allmendinger, EJ Viso and Ryan Hunter-Reay set all new standards in comedy — and should IMS be smart enough to put it online, will become a YouTube classic. Those gentlemen got into that press conference by beating guys who have traditionally dominated the series.

– Attendance was low. Now, I don’t mean “low by historical standards", I mean, “There were large sections of the pit road grandstand roped off" small, a much smaller crowd than recent pole days at Indy. Granted, it rained early in the day, never a good thing. Granted, people are skittish due to the Boston bombing. And granted, the local economy isn't strong, and price of gasoline is high, and the Pacers are playing tonight in the NBA playoffs. However, the attendance today will probably send shock waves through the Hulman-George family.

– Not only was attendance low for the day, but it was really low for the Fast Nine. By this time, the rain was a distant memory, but there seemed to be little crowd interest in the thing. NBC only carried the last few minutes of the Fast Nine, which (granted) had been pushed back due to the earlier rain. Perhaps the entire concept of "Fast Nine" should be re-examined?

– Then again, an article in another outlet suggested that the Indy race be condensed into 1 week, with qualifications on Thursday night. That's right — night. Indy will soon get lights. Certainly cutting costs at Indy would be welcome, but it is obvious that traditional schedules aren't drawing the interest that they used to draw. The trouble is that the Hulman-George family's org chart is, in the words of Jeff Belskus, "A work in progress". For the record, he gave me that quote when I asked him for his official title.

The lone team owner/driver in the IZOD IndyCar Series recorded a blistering four-lap average speed of 228.762 mph (best lap of 229.347 mph; 39.2418 seconds) in the No. 20 Fuzzy's Ultra Premium Vodka Chevrolet. The one-car team bested the best of Team Penske and Andretti Autosport in the shootout to claim a $100,000 bonus and 15 precious IZOD IndyCar Series championship points.

Carpenter's previous best start at the Speedway was eighth in 2010 and '11; his best finish is fifth after starting 10th in 2008. His pole speed was the fastest since Sam Hornish Jr. (228.985 mph) in 2006 for Team Penske. Hornish, the last American to win the Indianapolis 500 pole, went on to win the race.

Munoz, 21, is seeking to match Juan Pablo Montoya as an Indianapolis 500 winner from Colombia. Montoya also started second – as a rookie — in his 2000 victory. He was the last first-year front-row starter.

Positions 25-33 will be set through four-lap qualifications May 19 on Old National Armed Forces Bump Day.

There will be at least one bump in determining the 33-car field as Schmidt Peterson Pelfrey entered the No. 81 Angie's List Honda-powered car to be driven by Katherine Legge. She's expected to participate in the 9-10 a.m. (ET) practice session and make at least one qualifying attempt later in the day. Each entrant is allowed three qualifying attempts as time permits.