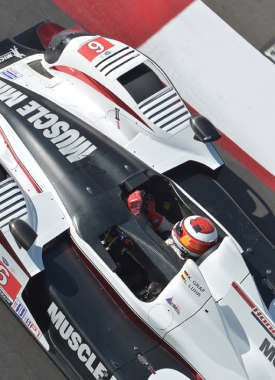 Luhr became the ALMS’ all-time leader in wins with 43, and he and Graf are the first drivers to repeat at Mazda Raceway Laguna Seca since 2007. Luhr took advantage of a daring move at the downhill Corkscrew in his No. 6 Muscle Milk Honda Performance Development ARX-03a and a late-race puncture for Rebellion Racing’s Neel Jani to win.

“This was sports car racing at its best," Graf said “My man Lucas drove a hell of a race. We are a really good sports car paring right now. At the end, it came down to the moves Lucas made in passing Neel. (Both teams) ran the same strategy, a good strategy, but today we have maybe a little better race-craft and a little more luck today for the win."

Luhr won by 6.352 seconds thanks to a late-race caution and a one-lap dash to the finish. Jani and Nick Heidfeld in the No. 12 Rebellion Timepieces/Lemco Connectors/Speedy Garage Lola-Toyota led most of the race’s first half. Luhr’s pass through the Corkscrew came just past the two-hour mark. The two cars swapped the lead four times over the final 34 laps and even made contact with 40 minutes left.

“After contact, the car was trashed," Luhr said. “Aerodynamically it was all messed up and mechanically I could feel the toe-link or something was broken. But I could fight it around. I knew the Rebellion car was much quicker on the straights so I knew (passing Jani in the Corkscrew) would be my only chance. The choice was good, but in the moment I thought maybe it wasn't such a good idea now that the rumble strips are throwing my car around."

Katherine Legge and Andy Meyrick were third in class in DeltaWing Racing Cars’ No. 0 DeltaWing LM12. Legge is the first woman driver to finish on the P1 podium in the ALMS.

GT
Corvette Racing’s Jan Magnussen and Antonio Garcia won a nail-biter in GT with the first five cars finishing within three seconds. The No. 3 Compuware Corvette C6 ZR1 led for the final three hours, 15 minutes but its lead was never more than five seconds the entire way.

Garcia finished 0.982 seconds ahead of Bryan Sellers in the No. 17 Team Falken Tire Porsche 911 GT3 RSR.

“I thought today, with as perfect as we've been driving, if we don't get this win, I wouldn’t know what else to do," Garcia said. “Everything worked, right where it needed to be. I think last year we had something like five second-place finishes, so we really deserved a win or two."

Sellers and Wolf Henzler were 0.754 seconds ahead of Dirk Muller and John Edwards in the third-place No. 56 BMW North America, LLC/Crowne Plaza BMW Z4 GTE. However, the No. 17 Porsche failed its stall test in post-race technical inspection, stripping the team and drivers of all points and prize money. The No. 17 does retain second in the final GT race standings.

The top eight cars in the class ran nose-to-tail and nine seconds covered the group well into the race’s second half. As is typically the case, the GT battle came down to pit stops. The No. 3 Corvette crew was four seconds quicker during its four stops than the Falken team in an incredibly even-matched affair.

“Today was one of the most perfect races we've had with Corvette Racing," Magnussen said. “We were under pressure the whole way. We never had a big lead, we really had to work through traffic and not get stopped by the slower cars and lose too much time. It was a matter of being 100 percent precise the whole race."

P2
Marino Franchitti and Scott Tucker led a 1-2 finish for Level 5 Motorsports, the team’s second such result of the season. Their No. 551 Siemens/Alpina Watches/Ohiya Casino Resort HPD ARX-03b was 5.578 seconds ahead of the No. 552 sister car, which Tucker drove with Ryan Briscoe.

Franchitti moved into first place at the two-and-half hour mark for his second win of the season with Tucker. The two won with Ryan Briscoe at Sebring and avenged a 1-2 class finish by Extreme Speed Motorsports at Long Beach.

“It was a perfect weekend and a great way for Level 5 to bounce back after Long Beach," Franchitti said. “This is what we needed going into Le Mans. The teams worked really hard, day and night. I picked a lot of spots today, and I tried to keep myself in positions where I wouldn't be in danger. That was going to be the only way we could win this race."

ESM’s No. 01 Tequila PatrÂ¢n HPD ARX-03b of Guy Cosmo and Scott Sharp finished third after two early stops to change flat tires, the last of which occurred while the car was leading.

“The overall mood of the team was really good," Tucker said. “Things went really well at the start. We didn't have a lot of issues. I was really pleased with the performance of both cars and with these guys. It was one of those weekends where things go well."

PC
PR1/Mathiasen Motorsports won for the second time in three races in Prototype Challenge presented by Continental Tire. Luis Diaz got around CORE autosport’s Colin Braun on the final restart in the No. 52 Molecule ORECA FLM09 he shared with Michael Guasch.

Braun took the lead near the two-hour, 15-minute mark and led until the restart in the No. 05 Composite Resources ORECA. Guasch led the PC portion in the event’s opening half but had a tense moment when he collided with a GT car near the end of his stint. The car continued undamaged, and Diaz drove the final two-and-a-half hours.

“Our pace was not a quick as Colin's but I tried to drive really hard in traffic, keeping the pressure on," Diaz said. “Finally on the restart he had the big mistake and we took the lead. Now we are stretching the lead for the championship and we'll have time to work hard on the car until (the next round at) Lime Rock."

Guasch won the opening ALMS round at Sebring with David Cheng and David Ostella. The PR1/Mathiasen entry also finished second in Long Beach last month and is off to its strongest start since joining the series in 2010.

“I knew we could do well here, but we just didn't get the setup for qualifying," Guasch said. “I tangled with a Ferrari in Turn 10, but we both got back in, and I brought it back in with the lead under yellow. And Luis did a great job keeping pressure on Colin, even under yellow."

GTC
Not long after Diaz made his winning move, Nick Tandy did the same Andy Lally near the halfway point of the final lap to win GT Challenge for NGT Motorsport in the No. 30 MOMO Porsche 911 GT3 Cup. Tandy, who drove with Henrique Cisneros, was three seconds behind Lally at the restart. NGT won for the second race in a row.

“Today was tough," Cisneros said. “It was one of those nail-biting races. The strategy was to get to the front, but things happen. We had a speeding violation in the pits from first, but we were able to get the car back up front. Then we got the final yellow, and Nick was not going to settle for second."

Tandy got around a GT-class Corvette on the final green flag and moved directly behind Lally’s Dempsey Del Piero Racing No. 27 Tully’s Coffee Porsche. Tandy set up the winning pass using an on-coming prototype that forced Lally wide at Turn 4. The NGT Porsche followed for the victory.

“There were about 12 cars in about 12 feet between turns 3 and 4. It was really just a free-for-all," Tandy said. “Andy is a top-class driver; he knows what he's doing, but all those laps behind the safety car, I think he knew I'd be behind him. I just kind of stuck my nose in, and we went three-wide into Turn 4, with a GT and prototype car. I went in the middle and Andy had to back off a little. I managed to get the run on the exit. There was so much going on that lap, halfway through I came out in first and it was over from there."

Lally was looking to give co-driver and team owner Patrick Dempsey his first major sports car race victory. Instead, it was Dempsey’s fourth career podium finish in professional series.

Alex Job Racing’s Cooper MacNeil and Jeroen Bleekemolen were third in the No. 22 WeatherTech Porsche.

The next round of the American Le Mans Series presented by Tequila Patron is the ALMS NE Grand Prix \. The race, from Lime Rock Park, is set for 3 p.m. ET on Saturday, July 6 with live coverage on ESPN2 and ESPN3.

The Series website offers additional content such as live in-car cameras, and timing and scoring for all users around the world. Viewers outside the U.S. can watch all ALMS races live on ALMS.com.