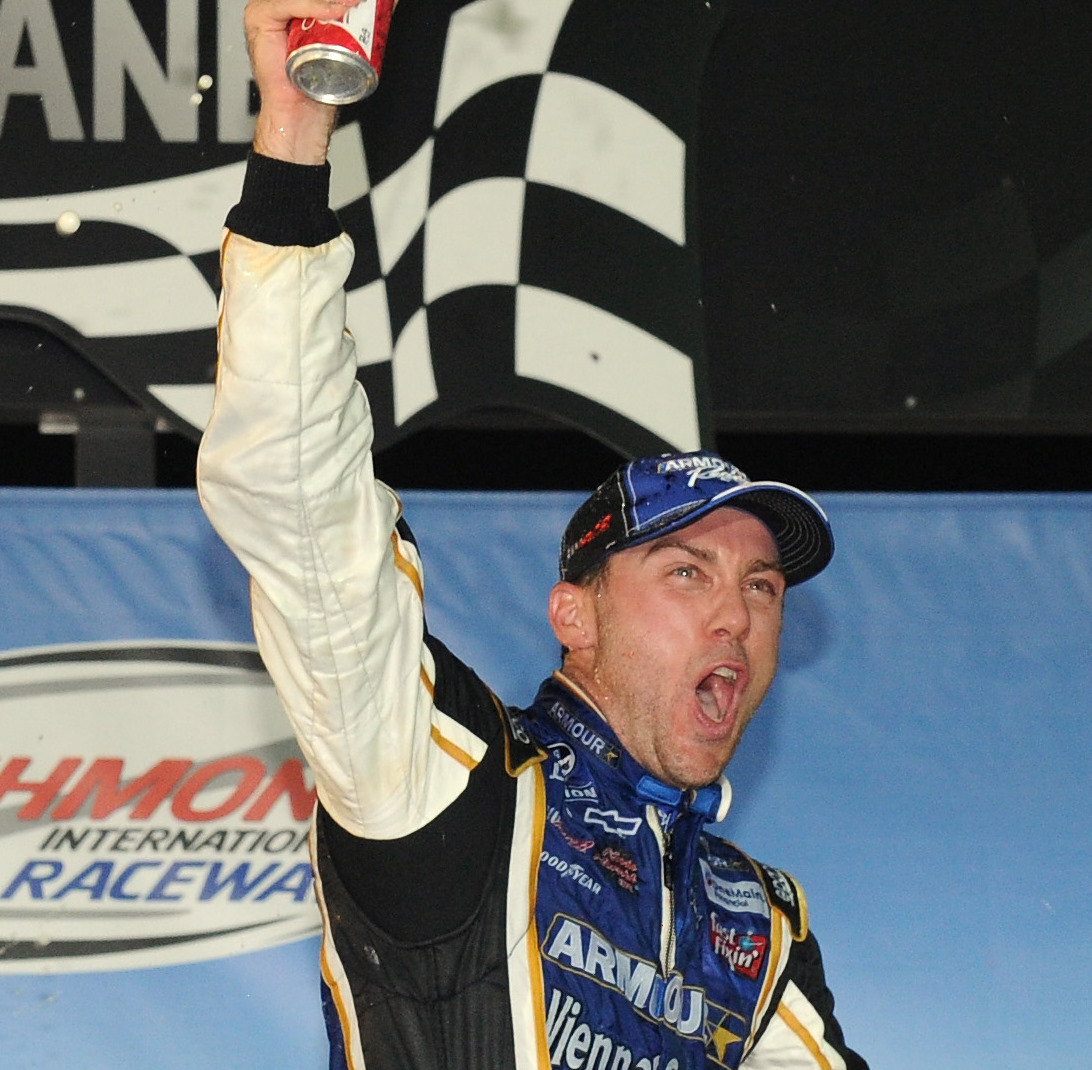 No water bottles were going to deny Kevin Harvick this time.

Just one week after a controversial late caution cost him a sure victory, Harvick snapped a 30-race winless streak in the NASCAR Nationwide Series with a win in Friday night’s race at Richmond International Raceway.

Harvick led 141 laps including the final 24 after taking the lead from Kurt Busch following a caution on lap 227 and then easily pulled away on the final restart to record his 38th Nationwide Series win and his first since winning this same race in 2010.

“I think we’ve led more laps in ten races in this series than anyone else that’s run all year – the cars have been there week after week, but we went through a spell there of things that could go wrong went wrong," said Harvick. “Last week we just absolutely dominated the race but didn’t really get to race all day. That was a lot of fun with Ricky and Kurt there at the end to be able to race as hard as we could go for 60 to 70 laps and be able to come out on top."

It was just a week ago that Harvick seemed on route to an easy victory at Atlanta, having led all but 43 laps only to see his insurmountable lead fade away with a late caution flag Harvick believed was the result of a water bottle tossed onto the track by Brad Keselowski.

Harvick would eventually be passed on the last lap by Ricky Stenhouse, Jr. – marking the fifth time this season Harvick had led the most laps in a Nationwide Series race and gone on to win.

Although NASCAR would say the caution flag was for other debris on the racetrack, Harvick directed his post-race frustration squarely at Keselowski.

This time, it was late-race caution that worked in Harvick’s favor.

On lap 227, Busch got into the back of rookie Dexter Stacey, sending Stacey spinning to the infield grass while Busch barely scraped by, slowing his momentum just enough for Harvick to nose out in front and take the lead when the caution flag was displayed for the seventh and final time.

On the restart with 18 laps to go, Harvick held the lead on the low side as Busch tried to make a run on the outside, but Harvick and Stenhouse, Jr. pulled away leaving Busch to battle Hamlin for third.

Up front, Harvick moved out to a nearly two-second advantage over Stenhouse, Jr. and would go on to win by nearly half a straightaway – tossing a water bottle onto the track during his celebratory burnout.

With the runner-up finish, Stenhouse notched his third straight finish in the top-two and his eighth top-five in his last 10 races.

“I gave it all I had on the outside with Kevin there and that was a lot of fun racing him, last week and this week, we gave each other a lot of room and had a lot of fun doing it," said Stenhouse, Jr. “Congratulations to them. I know they deserve this one as well as last week. It was a great night for us and we were just too loose in and too loose off and not exactly what we wanted. It is a good top-two finish though and that is three good races in a row. We just have to keep doing that."

Friday night’s race saw a major shakeup in the points standings as points leader Elliott Sadler nearly saw his championship hopes go up in a shower of sparks after spinning out on lap 187 while battling Stenhouse, Jr. for position.

Sadler’s crew made some timely repairs and only lost a single lap in the pits. Sadler would eventually get back on the lead lap and rally to finish 12th to retain the series lead by a single point over Stenhouse, Jr. with eight races remaining.

The new was not as lucky for Sam Hornish, Jr., who came into Friday night’s race third in points but ended up dropping to fourth after a cutting a tire and crashing on lap 157, bring out the red flag.

Austin Dillon finished sixth and moved up to third in points, 30 points behind Sadler.

Danica Patrick crashed again and spent many laps behind the wall having her right front repaired.