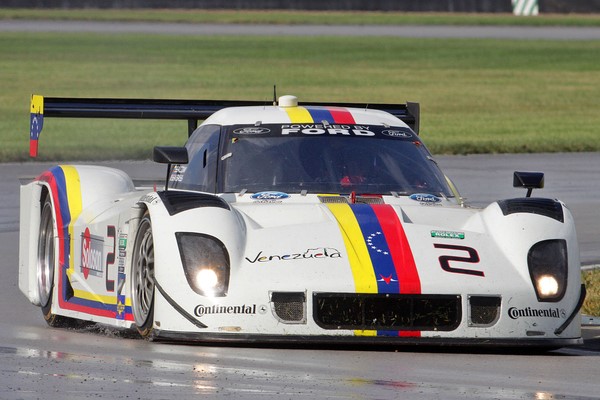 Sebastien Bourdais and Alex Popow survived a rough-and-tumble round of the GRAND-AM Rolex Sports Car Series to win the inaugural Brickyard Grand Prix on Friday at Indianapolis Motor Speedway.

Bourdais, who drove the anchor leg for Starworks Motorsport in the No. 2 Soloson Ford/Riley, pulled away on the final restart on the 2.534-mile Indy road course to clinch the Daytona Prototype division's first North American Endurance Championship presented by VISITFLORIDA.com, a three-race midseason series.

The Brickyard victory is the latest in a string of prestigious victories for the Starworks team in 2012. The team won its class in endurance races at Sebring and Le Mans, and finished second in the season-opening Rolex 24 At Daytona.

"It's amazing, sitting here in first place at the Brickyard — it's like a dream come true," Popow said. "This is something I've been chasing all year."

The No. 01 TELMEX BMW/Riley driven by Scott Pruett and Memo Rojas for the Chip Ganassi Racing operation limped home second in the three-hour event, which was dotted by heavy rain in the early going and nine full-course cautions in total.

"I think this hat says it all: Super Weekend," Pruett said. "I think most everything took place — it rained, we had a tore-up race car — but we managed to scratch back and finish second."

Max Angelelli and Ricky Taylor took third in the No. 10 SunTrust Racing Corvette DP. Juan Pablo Montoya, who teamed with Scott Dixon in the No. 01 Chevron BMW/Riley Ganassi entry, stoked controversy with his driving stint, first bumping Joao Barbosa and then Ryan Dalziel out of likely top-five finishes in the late stages.

Six Daytona Prototype cars traded the lead, with the No. 8 Duncan Starworks entry driven by Dalziel and Enzo Potolicchio leading the most laps (36). Their tenure at the helm came to an end when Bourdais took command for the final time, speeding past Dalziel in the 75th of 91 laps.

Pruett and Rojas stretched their lead in the Daytona Prototype standings over Dalziel and Potolicchio, who finished 17th Friday, from three points to 11.

Andy Lally and John Potter prevailed in the Grand Touring class, finishing fifth overall and securing the North American Endurance Championship in that division. Lally drove the closing segment for the No. 44 Magnus Racing Porsche GT3, which won for the second time this season and found redemption after a fiery end to the series' last round at Watkins Glen.

"Just amazing. We just won Indy," said Lally, last season's NASCAR Sprint Cup Series Rookie of the Year. "I've said it 60 times since we took the checkered flag, but it was such a hard-fought battle all day long with those guys."