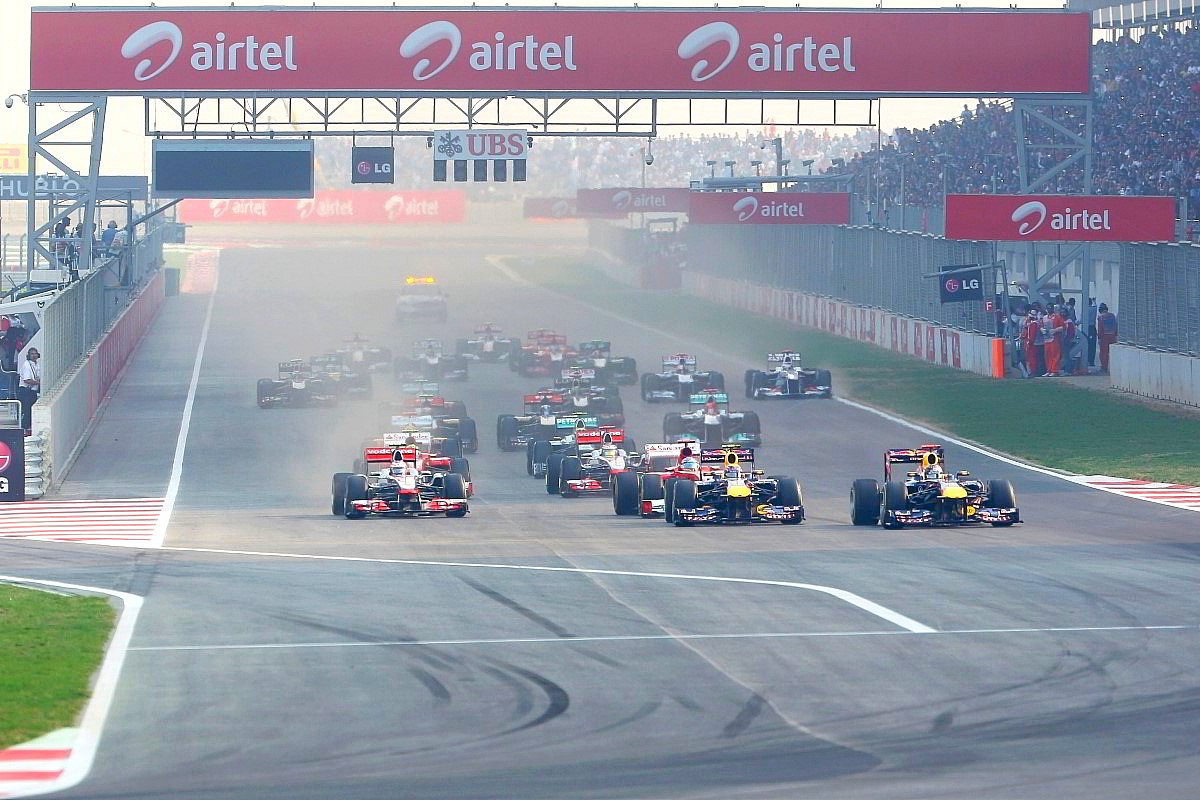 UPDATE India’s Supreme Court ruled that Formula 1 World Championship Ltd. has a permanent establishment in India and "as such income accruing from it should be taxable."

An assessing officer will "decide the amount of tax to be levied." The tax will reportedly be "levied at a rate of 40% on the total business income, with additional interest imposed over and above it. MOTORSPORT

10/28/16 Getting Formula 1 back to the Buddh International Circuit (BIC) is not on the priority list for the debt-ridden Jaypee Group but at the same time, it has no plans to sell the $400 million facility that put India on the world motorsport map, said track chief Sameer Gaur.

"Yes, we are not thinking of hosting any big race including F1 in the near future because of reasons well known but it doesn't mean we are open to selling the circuit. The thought has not even crossed our mind," Gaur, who is Jaypee Sports International MD and CEO, told PTI.

The BIC has been away from the limelight ever since the race was dropped from the F1 calendar following three editions from 2011 to 2013. The maintenance cost of the circuit remains high and with no major international race being organized, a handful of domestic events besides vehicle testing days contribute to its running cost.

"Maintaining a big facility like BIC is surely tough but we have been able to do that well despite the constraints," he said.

The Jaypee Group overall is undergoing tough times. The total debt of the conglomerate is estimated to be around Rs 75,000 crore as on 31 March 2015, according to foreign brokerage firm Credit Suisse.

It was not a surprise that it chose to sell some of its cement and hydro power plants to reduce the debt burden.

Even in the existing scenario, Gaur remains an optimist and promised that F1 will return to BIC at some point, though not in the near future.

"We built such a huge circuit to host big events like F1. Yes, under the circumstances, it is not at all our focus but when the situation improves, we will surely think about making better use of the track," added Gaur.

In a recent chat with PTI, F1 boss Bernie Ecclestone had expressed a strong desire to have India back on the calendar despite the challenges that come with the hosting of the high-profile race.

It is quite clear that for the race to return, the tax and bureaucratic hurdles that were created during the three active years, will have to be cleared besides significant improvement in the financial health of the Jaypee Group. PTI

06/17/16 Indian F1 Grand Prix CEO Sameer Guar said that the shelved event is "unlikely to return to the Buddh International Circuit until the financial health of its debt-ridden promoter Jaypee Group improves," according to the PTI.

Gaur, who had earlier said that "taxation issues surrounding the race will have to be resolved for it to return, now says the Jaypee Group will try to get the race back after the conglomerate is back on track." The "total debt of the Group" is estimated to be around Rs 75,000 crore ($11,274).

Jaypee Sports Int'l CEO Gaur said, "There are no immediate plans to get the race back. The main focus is on improving the overall health of the Jaypee Group. As in when the economic scenario improves, we will think about the race."

Getting the race back "looks like a herculean task." Even when the tax issues are sorted out, Jaypee "would have to cough up a huge amount as licensing fee to FOM." It is believed that the Group "shelled out" around $40M each year for the three races. PTI

Last week, a senior official at the former race promoter Jaypee said the organization is "trying our best to hold the race by 2017".

New Delhi hosted three consecutive races until 2013, but fell off the calendar this year amid financial issues and complex governmental hurdles relating to tax and red tape.

A senior official has now told the Indian news agency PTI that Jaypee has been working "desperately" to revive the race at the Buddh circuit.

"Recently, our top boss Sameer Gaur had a meeting with Bernie Ecclestone in Sochi on bringing the race back to India," he said.

"They had a fruitful discussion, and if everything goes accordingly, then the Indian GP should go once again in 2016."

F1 chief executive Ecclestone confirmed: "We had a fruitful meeting in Russia.

"I was assured that the tax and other related problems will be sorted out in due course and then we are good to go back.

Gaur also confirmed the news, revealing the talks in Russia had put the promoters and F1 officials back "on the same page".

"While 2015 looks tough as the calendar is more or less final, we should look at 2016 as the year for the return," he added.

It is reported that the sudden revival of India's fortunes is due to a change in government, after the previous administration did not recognize F1 as a sport for tax reasons.

"Since the present government is encouraging several international events, the Indian GP could be a beneficiary," an official confirmed.

But with Azerbaijan arriving on the calendar next year and India now back on the cards, the prospect of an even busier schedule may not be popular among F1 teams.

"Will it be really possible to hold 22 races a year?" said an official.

11/12/14 As you will see from this AR1 Hot News item, Indian Grand Prix promotion company Jaypee has ruled out any chance India will return to the Formula One calendar in 2016. The Buddh International Circuit near New Delhi, of course, hosted Formula One from 2011-2013.

The best case scenario according to Jaypee senior vice-president Askari Zedi would be a 2017 Grand Prix. At issue, are complex Indian tax laws, which local authorities claimed gave them rights to tax the event. Further, the Indian Grand Prix was one of the few races on the calendar that wasn't subsidized by the local government.

And what is the likelihood Formula One will return?

Probably, not high. Bernie Ecclestone has many suitors more than willing to pay the freight to host the F1 Circus. And with races in Bahrain, Abu Dhabi, China, and Japan, F1 has a more than sufficient footprint in the Asian rim. No need for Ecclestone to deal with the local authorities and red tape, a race in India would present.

Now, would the vacated Indian Grand Prix present an opportunity for IndyCar?

Well, INDYCAR would obviously have to negotiate around the tax laws that have burdened the F1 race. However, the Buddh International Circuit is a state-of-the-art FIA Grade 1 facility, looking to generate revenue. India itself has 1.2 billion people, and an emerging automobile industry. And if Hulman & Company CEO Mark Miles is serious about having a footprint in the international market, racing in a country with 15% of the world's population might make more than a little sense.

Of course, that is why it probably won't happen.