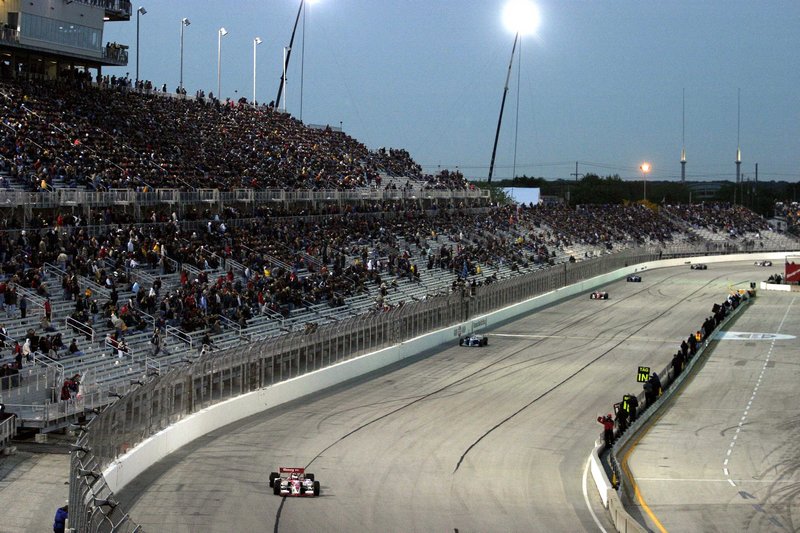 As the Verizon IndyCar Series opened up the month of June with a double-header in Detroit, I found myself reminiscing about many fine races held at the Milwaukee Mile writes Frank Santoroski of the Motorsports Tribune.

The venerable one-mile oval first acquired the date after the Indianapolis 500 in 1949, and the tradition carried on until the open-wheel split in 1996. The CART series maintained the early June date after the split, although their competitors were not running at Indianapolis.

The track, located within Wisconsin State Fair Park in West Allis, had a near-death experience in 2009 when it was announced that no professional races would be held in 2010. Financial reasons were cited, the track offices were closed and the entire staff laid off.

In 2011, the IndyCars returned to the Mile with a sparse crowd. The following season, Andretti Sports Marketing took over as promoter and attempted to rejuvenate interest in the race. Four years of effort fell short of expectations, despite the fact that the IndyCars put on an entertaining show.

When Andretti Sports Marketing dissolved in 2015, there were no other promoters willing to jump on board the sinking ship. The Milwaukee Mile was noticeably absent when the 2016 Verizon IndyCar schedule was announced.

What does this mean for the oldest operating motor racing facility on the planet? Is it truly the end of the line for a place that holds more racing history than Indianapolis, Monaco or Le Mans?

“It’s hard to make money there," says Dave Kallman, a writer for the Milwaukee Journal-Sentinel. “It’s a tough proposition for owners and sponsors. It’s just a real hard sell…. As far as the future – it costs money to take it down, too. So really, State Fair will continue to try with driving experiences and other ways to get some revenue coming. Ultimately it will go away – when it is, I’m not sure."

While the Milwaukee Mile does have a fairly full schedule of club racing, driving schools, and vintage events there are some indications that we may see the bulldozers sooner, rather than later. Some of the grandstands have already begun to disappear. The turn-four ZZ stand disappeared in 2010. I recently came across a government liquidation auction site, and saw the adjacent YY grandstand up for sale. The 1,100-seat aluminum and steel bleacher stands sold for $37,000.

Now, reducing the seating is not, in and of itself, cause for concern, as we have seen this at many racetracks recently. However GRAEF Inc., a firm specializing in urban design and redevelopment, has submitted a proposal to redevelop the property that the Mile sits on.

GRAEF’s concept outlines how the City can redevelop the property, incrementally over several decades, as an environmentally-friendly destination center. The redevelopment would benefit State Fair, the immediate neighborhoods, the abutting historic main street, and the overall community.

The part of this document that actually made me sick to my stomach is a sentence where the Milwaukee Mile is referred to as “a large tract of land near I-94 under the jurisdiction of the Wisconsin State Fair that sits atop an underground section of Honey Creek." In the spirit of supposed progress, no mention is made of the historical significance of the facility that first hosted auto racing in 1903.

In looking back at the various events that have led to this, it is apparent that, even 20 years after the fact, the historic Mile is yet another victim of the open-wheel split. Between 2004 and 2006, Milwaukee was the only track to host both the CART series and the Indy Racing League. With the race dates just six weeks apart, this only served to further divide the fan base in a medium-sized metropolitan market.

The crowds continued to dwindle and, despite the best efforts of all involved, we have arrived at a precipice in the track’s storied history. Will club events keep the facility afloat, or is it destined to be razed to the ground?

Groups like Save the Mile are working feverishly for the cause, but with no professional racing scheduled in the foreseeable future, the urban re-development proposal may be more attractive to the state and local government.

Certainly, the demise of a racing facility is not unprecedented. Riverside, Trenton, Ontario and, more recently, Nazareth have fallen by the wayside and fell victim to redevelopment. Other tracks, like Texas World Speedway and Rockingham, continue to play host to club racing and local events with mostly empty grandstands, a mere shadow of their glory days.

Something deep inside tells me that The Milwaukee Mile deserves a better fate than this.

IndyCar fans in Wisconsin can take solace in the fact that the Verizon IndyCar Series will make a much-anticipated return to the picturesque Road America circuit in Elkhart Lake on June 26th. Frank Santoroski/Motorsports Tribune