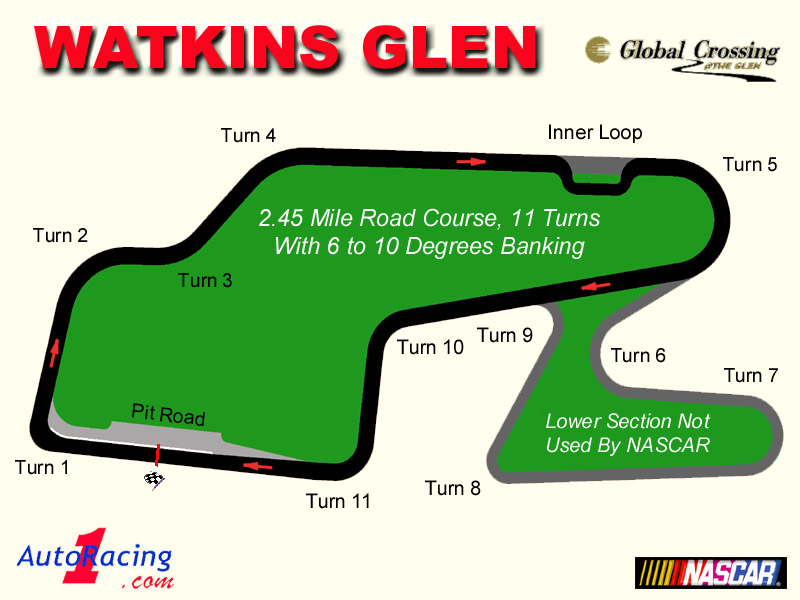 UPDATE AR1 has it on extremely good word that NASCAR will NOT run The Boot at Watkins Glen. Running The Boot would add about a mile to the current Short Course configuration and thus shorten the number of times the cars will come by. For NASCAR fans used to being able to see the whole track, adding a mile of space in which fans do not see their favorite drivers makes no sense.

Anyway, take this one to the bank. NASCAR will not run The Boot. This rumor is downgraded to false.

05/05/16 After a five-month, $11 million-plus facelift that started with the boot – and continued with the remaining 2.45-mile road course that NASCAR uses for the Sprint Cup and Xfinity Series following the races last August — Watkins Glen president Michael Printup is ready for his "Wild Season" to begin.

There's been speculation that the Glen might consider adding the boot to the current layout NASCAR uses and return the circuit to the full Grand Prix course. That would maximize the track at 11 turns rather than the seven the Sprint Cup tour uses for its annual romp just south of Seneca Lake in upstate New York.

"Steve O'Donnell (NASCAR Executive Vice President and Chief Racing Development Officer) said last year, 'Maybe we should race the boot,' but that adds another mile," Printup said. "The only thing the fans are concerned about is if you add another mile you only get to see the cars come around 60 times instead of 90. So there's a fan engagement opportunity that we have to analyze and get some feedback on before us and NASCAR make a decision. It would be fun, it would be sexy, it would be fast. But I think the fans need to give their opinion before we decide what to do." Motorsport