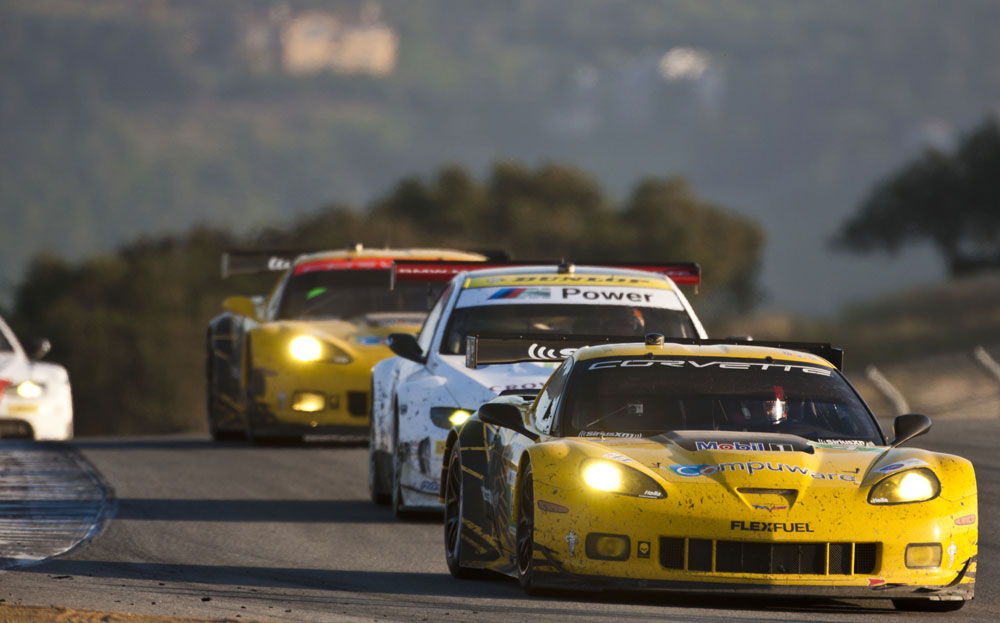 The last 90 minutes of the GT race undoubtedly was the highlight of the American Le Mans Monterey presented by PatrÂ¢n. Seven cars in the class were within two seconds in the closing hour including the two Corvettes, BMW Team RLL’s two BMW M3s and Porsche 911 GT3 RSRs from Flying Lizard Motorsports and Team Falken Tire.

Gavin made what turned out to be the winning pass in his Corvette C6.R on Team Falken Tire’s Wolf Henzler with a little less than an hour left at the final turn. But the drama carried on for the next 60 minutes. Bill Auberlen in the No. 55 BMW M3 GT looked set to challenge Gavin for the race win before Jan Magnussen in the sister Corvette muscled his way past the BMW with less than 15 minutes to go.

“It was so tight in our class. You could never let off and think 'I'm alright now,’" Gavin said. “I had a few close calls in the pitlane, and then Wolf passed me for the lead. He was hard but fair, and he gave me just enough room to get by at the last turn. I managed to sneak by a lot of people today, and we managed to catch all the breaks. It was a great race for me today."

Two rare less-than-stellar pit stops seemed to take the No. 4 Corvette out of contention past the halfway point. First there was a refueling issue that sent the car from first to seventh under caution, and then the team couldn’t get the left-rear tire changed on another stop. It was a sickening feeling, Milner admitted but hope always remained.

“It was frustrating, but the car really was one of the best race cars I've ever had," Milner said. “I knew it would be tough to make it back to the front there. From first on back to sixth, the cars were so competitive. Passing is pretty difficult and I knew I had to bide my time, and be careful in many situations. I had a few close calls and a little contact, but beyond that we got up to third or fourth, gave it over to Oliver and he took it to the finish. “

Magnussen and Antonio Garcia wrapped up the Corvette 1-2 after Magnussen’s daring pass. Their No. 3 Corvette also won the GT portion of the Michelin Green X Challenge due to its superior efficiency and emissions control compared to the rest of the GT cars.

Auberlen and Jorg MÃ¼ller placed third in the GT standings.

At the front of the field, Klaus Graf and Lucas Luhr dominated in their Honda Performance Development ARX-03a prototype. The duo trailed for less than a quarter of the opening lap after a strong start at the green flag by Dyson Racing. Graf regained the advantage at the third turn – he claimed Chris Dyson jumped the start – and the Muscle Milk car lapped the field within the first two hours.

“We had to keep pushing to keep our rhythm," Graf said. “We did competitive laps; that’s what we wanted to do. It is the safest way to drive. If you go away from the path it is dangerous. We have to stay predictable in traffic too, so we can't stray too much. You always have close calls, and there is no way to avoid that. Some guys don't see you and that is the way it is. You have to look ahead and pay close attention."

The Muscle Milk HPD ran flawless over the course of the race – a trait that carried over the entire weekend. It was quickest in every practice session, Graf was the fastest qualifier, and Luhr set the fastest race lap.

Dyson’s trio of Chris Dyson, Guy Smith and Johnny Mowlem placed third. The Muscle Milk duo moved into the P1 championship lead with the victory – a luxury the Pickett squad has never enjoyed in the ALMS.

“It was a good race for Muscle Milk Pickett Racing especially now that we have two wins in California in front of our home crowd," Luhr said. “It was very important for the whole team and our motivation. It was very nice. There were so many friends and family of the Picketts here to support us. We can show them two back-to-back victories. I'm very happy Klaus did a very good job in the beginning, and we had a very good lead early. We had to keep our focus, stay out of trouble and bring it home. That's what we did."

The Muscle Milk car also won the prototype portion of the Michelin Green X Challenge for the second consecutive race. The HPD swept all three categories – clean, fast and efficient.

Level 5 Motorsports is three-for-three on the season in P2 following a victory for Franck Montagny, Scott Tucker and Luis Diaz. Their HPD ARX-03b overcame a couple of penalties in pitlane and a wild day for each of the three cars that led the class.

“The team is very prepared to fight for overall wins," Diaz said. “The P1s are a bit quicker in the straights to be fighting with them. Our goal is to develop race by race. The aero of this car is great, you can roll such a great speed in the corners. I think also the mechanical side of the car is great. It’s just an awesome car."

The P2-leading No. 055 crashed out just after it lost the lead – ironically with Montagny driving that car as well – and Conquest Racing suffered a late-race mechanical issue that took it out of contention. Its Morgan-Nissan driven by Martin Plowman, David Heinemeier Hansson and Antonio Pizzonia placed second in class.

“I was not so happy," Montagny said of his incident with the JDX Racing GT Challenge Porsche. “Especially for a team like this, you don't feel good when things like that happen. But the team worked hard and put it back together and got it back on the track. They still finished P3 so they are happy. But I am a race car driver and I had to do my job."

“On the radio I knew Franck was behind me, and then I realized he wasn't anymore," Tucker said. “I didn't really know what had happened. It looked really bad but the team did a great job putting it back together. Then Luis drove the winning car splendidly and we ended up overall having a good day."

CORE autosport won for the third straight Prototype Challenge race as well, but this time Colin Braun and Jon Bennett were class victors in the No. 05 ORECA FLM09 of this time around. Braun passed RSR Racing’s Bruno Junqueira on the next-to-last lap as the two cars split a GT Challenge car on the last part of the lap.

“The last few laps were exciting. I was racing Bruno, and I had to push really hard," Braun said. “I knew I had to set him up in traffic – that was going to be the only way I could get by. He went one way, and I went the other and it turned out right for me. We were two laps down at one point, but with race strategy and a great stint by Jon we were right there in position."

The victory was the first in the ALMS for both Braun and team owner Bennett. The CORE squad has finished on the PC podium in each of the season’s three events.

“I’m fairly speechless to be honest. It’s been a long time getting here," Bennett said. “I'm honored and proud to be part of CORE autosport. It's been spectacular in the short time we've been together. I was impressed with Colin; we did some karting together early in the year, and I knew it would be a great season. He put on the move of the race in the last few laps for the win. It was awesome."

“This is getting harder and harder to win," admitted Bleekemolen, who drove for TRG after Black Swan didn’t enter its P2 Lola-Honda for the race. “You are getting a lot more cars out there with experience and a lot of great drivers. We didn't have a lot of mistakes from the drivers and the teams, so it was just a good win."

The TRG entry worked its way up from seventh in class near the start of the race and into podium position near the three-hour mark. A steady and consistent climb was the goal, Curtis said.

“I think we just drove a really hard race, but conservative," he said. “The thing about (team owner) Kevin Buckler and TRG is he wants you to push, but he also wants you to pace the car. The strategy was really good. Everyone was putting in solid laps, and the crew did a super-super job. It was the strategy from the get-go. Some teams might have been struggling but we kept on and took the win."

The focus of sports car racing now turns to the 24 Hours of Le Mans where select ALMS teams compete on June 16-17 at the famed 8.3-mile French circuit in the world’s greatest auto race.

The Series’ website offers additional content such as live in-car cameras, and timing and scoring for all users around the world. Viewers outside the U.S. can watch the Lime Rock round and all ALMS races live on ALMS.com.