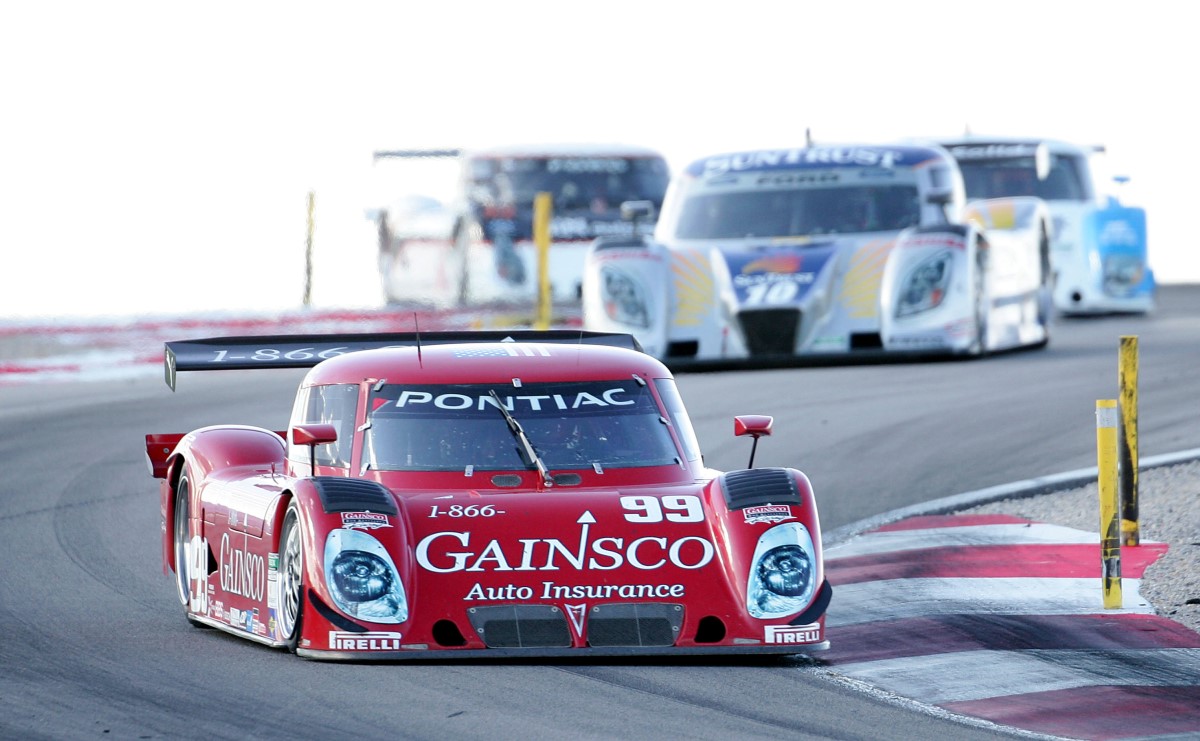 The pair led 43 of the 56 laps to win the two-hour, 45-minute race on the 4.486-mile circuit before near-zero fans. Gurney took the lead in the No. 99 GAINSCO Pontiac Riley on the 30th of 56 laps and paced the final 27 circuits, taking the checkered flag 1.264 seconds ahead of Max Angelelli. Scott Pruett finish third, 1.529 seconds behind the winner, with the top three teams in the championship sweeping the podium.

"We got the pole, fastest lap and the win – we had the whole shebang this weekend," Gurney said after scoring the winning duo's season-leading fourth victory. "It was a great day for the championship. I think we had the pace this weekend."

The Acxiom GT race came down to the wire. Robin Liddell and Dirk Werner getting together coming to the white flag to give the victory to Jeff Segal and Emil Assentato, who came from last to first to win their second race of the season in the No. 69 FXDD SpeedSource Mazda RX-8.

The victory moves Gurney and Fogarty to an eight-point lead (309-301) in the Daytona Prototype point standings entering the season-ending Grand Prix of Miami on Oct. 10 at Homestead-Miami Speedway. Angelelli and Brian Frisselle, drivers of the No. 10 SunTrust Ford Dallara, took sole possession of second place, while Pruett and Memo Rojas are 10 points behind the leaders in the No. 01 TELMEX Lexus Riley.

"You can trust me, all three of us were pushing like crazy," Angelelli said. "We absolutely, for two hours, were running like qualifying. It was the best I could do, and I'm sure it was the same for the (Nos.) 99 and the 01. They all gave 100 percent, I have no doubts. I could see it."

Fogarty led the opening 16 laps before pitting. Timo Bernhard, who pressured Fogarty from the drop of the green flag, led 13 laps in the Penske Racing Verizon Wireless Porsche Riley, before Gurney took over on the final round of pit stops.

"All in all, it worked out really well," Fogarty said. "Alex did a tremendous job. He was in the car for a long time and had to fight off a lot of attacks."

The race was slowed three times for 10 laps by cautions (once for debris, twice to tow stalled cars), with the three championship leaders in the top three positions. Each time, Gurney was able to pull away on the restart.

"The restarts were stressful," Gurney said. "We were a little short on top speed on the front straight and I could see Max closing, so I had to get really good jumps."

Bernhard and Romain Dumas finished fourth, followed by Burt Frisselle and Mark Wilkins in the No. 61 AIM Autosport Ford Riley.

Despite starting last on the 13-car GT grid due to an engine change after qualifying, Assentato and Segal battled all the way to first in the Acxiom GT class. Then, Segal had to do it all over again following a pit stop to take the team's second victory in the last three races.

Segal stayed out under the second caution period, and after a wave-by, managed to join Andy Lally in pulling a huge gap on the GT field. Segal, driving the No. 69 FXDD Mazda RX-8, held a one-minute, five-second lead when the second caution waved after his teammate – Sylvain Tremblay in the No. 70 Castrol Syntec Mazda RX-8 started from the pole by Nick Ham – was bumped off course and became mired in a gravel trap. Segal worked his way back to third, and found himself in the lead after the two leaders spun after contact on Lap 44 of 46.

"(Team strategist) Jerry York called our strategy to perfection," Segal said. "I was sitting in the car fighting back and grinning and just my luck, I was so disappointed when we got that yellow flag. But the car never missed a beat and we came back through the field. I don't know what happened to the (Nos.) 57 and 87, but we certainly were coming. We've been in the wrong place at the wrong time enough times – especially this season – so I don't feel lucky at all. We earned this one – the entire team."

The late incident robbed Werner and Leh Keen the chance to eliminate their lone rival for the GT championship. The drivers of the No. 87 Farnbacher Loles Porsche GT3 finished sixth, and now lead Collins by 30 points (329-299).

"It would be nicer to come to Miami with everything already done," Werner said. "It was in my hands to win the race or clinch the championship and I did not do it. I realized too late I did not need to be side by side, and it was a mistake."

Max Hyatt and Jeff Westphal finished fourth in the No. 32 Team Miracle Sealants/PR1 BMW M6, followed by Craig Stanton and John Potter in the No. 65 Magnus Racing Porsche GT3.

Practice for the Grand Prix of Miami begins on Thursday, Oct. 8, will qualifying on Friday and the race taking the green flag at 1 p.m. Saturday (SPEED, live).