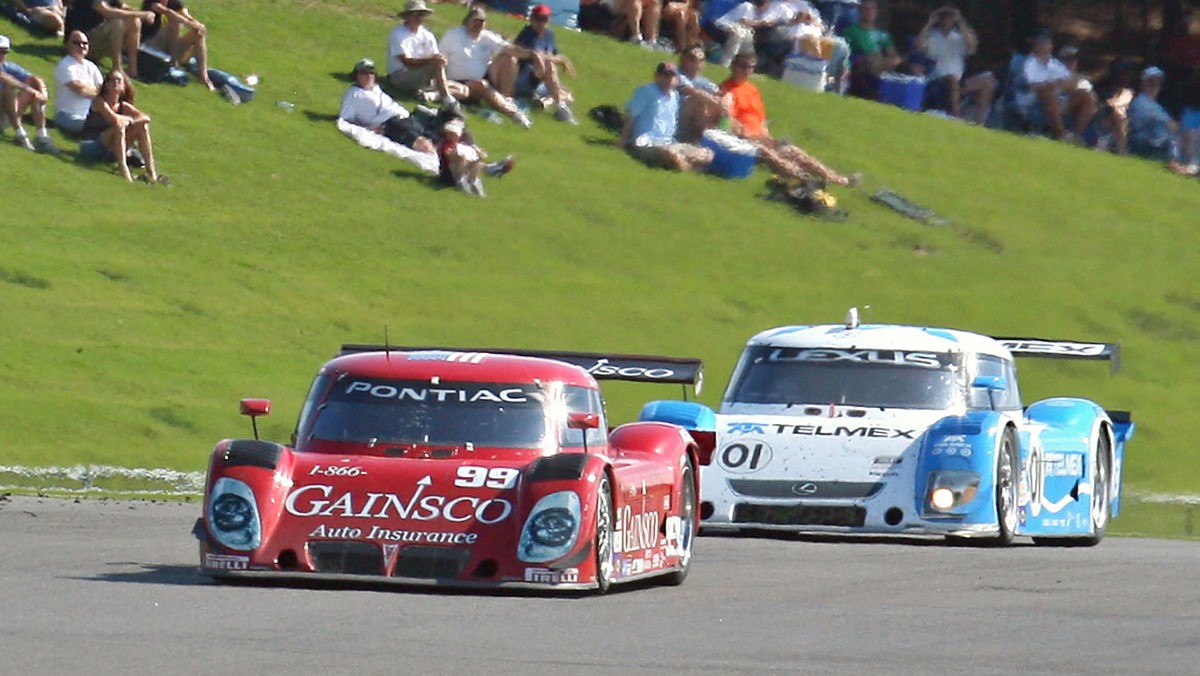 In Acxiom GT competition, Andrew Davis and Robin Liddell scored their second victory of the season in the No. 57 BryanMark Financial/Stevenson Automotive Pontiac GXP.R.

Gurney won the team's series-leading third race of the season in the No. 99 GAINSCO Pontiac Riley, started by polesitter Jon Fogarty. Gurney won by 0.759 seconds over Scott Pruett, who took over from Memo Rojas in the No. 01 TELMEX Lexus Riley. It was the sixth time in eight races the margin of victory was less than one second.

"We didn't want to see that last yellow," Gurney admitted. "We had a great strategy that kept us out front and our car was good enough to win. So it was a great day. Scott drove really clean and it looked like he was a little quicker, so I was really happy about that. I'm really happy for everyone at GAINSCO and that we can fight it out these last four races."

"We weren't going for the points, we were going for the win," Pruett said, with the TELMEX and GAINSCO teams tied with 231 points apiece. "It was another great race for Grand-Am – it was close and a great race for the fans. The points race is tied up again, and the race is on for the championship."

Buddy Rice and Antonio Garcia finished fourth in the No. 09 AMA Pro Racing Porsche Coyote, with Garcia leading two laps midway through the race. Fifth went to Ricardo Zonta and Nic Jonsson in the No. 76 Krohn Racing Ford Riley.

Two of the four leading championship contenders entering the event experienced problems in the opening laps. Penske Racing entered the event fourth, 17 points back, but Romain Dumas went slightly off course moments after the drop of the green flag, which culminated in damage to the front end of the No. 12 Verizon Wireless Porsche Riley. The team lost three laps making repairs, and Dumas and Timo Bernhard went on to finish 15th. They now have 198 points, 33 behind the leaders, while Valiante took over fourth with 215 points.

"This was a weekend to forget," said Bernhard, who mentioned the Penske crew worked until 3 a.m. Saturday after a practice crash destroyed the bottom of the team's race car. "The crew worked very hard to fix the car, but we could not get a good result to repay them for their hard work."

SunTrust Racing drivers Brian Frisselle and Max Angelelli entered the race one point behind Pruett and Rojas. Frisselle went off course and was stuck in a gravel trap on Lap 3, bringing out the first caution period. He lost four laps. The team was able to make up one lap but finished 14th, and is now 16 points out of the lead with 215 points.

Following Frisselle's incident, the race ran caution free until the No. 30 Sahlen's/3Dimensional.com Mazda RX-8 of Dane Cameron stopped at Turn 9 entering the race's final half hour.

Fogarty led 48 laps and Gurney 41 as the GAINSCO duo led the most laps at Barber for the third consecutive year, averaging 90.629 mph. David Donohue led 13 laps in the No. 58 Brumos Porsche Riley before contact with a GT car resulted in a cut tire and a 10th-place finish. In addition to Garcia, other race leaders were Rojas (three laps), Valiante (one) and Mark Wilkins (one).

Stevenson Motorsports stretched the opening shifts for both Andrew Davis and Robin Liddell, who had fresher tires in the stretch run en route to the second victory of the Acxiom GT campaign.

"Nick kept me honest in the closing laps, because he could match our times." Liddell said. "But honestly, I knew we had it in the bag."

Liddell led 60 laps and Davis 14, while defending race co-winners Ham and Tremblay led 14 and four laps respectively. The only other leader was polesitter and point co-leader Leh Keen, who led the opening 11 laps in the No. 87 Farnbacher Loles Racing Porsche GT3.

Keen and Dirk Werner placed fifth after winning the past three GT races and four of the last five. They maintained their points lead over Edwards and Collins, who closed to within 25 points with four events remaining (247-222). Tremblay and Ham moved from fifth to third in the standings with 211 points.

While race day temperatures reached 83 degrees, the weather was a far cry from recent years. Last year's race was held in 103-degree heat.

The next action will be the Crown Royal 200, Friday, Aug. 7 at Watkins Glen International, when the Grand-Am Rolex Series races in conjunction with the NASCAR Sprint Cup and Nationwide Series.