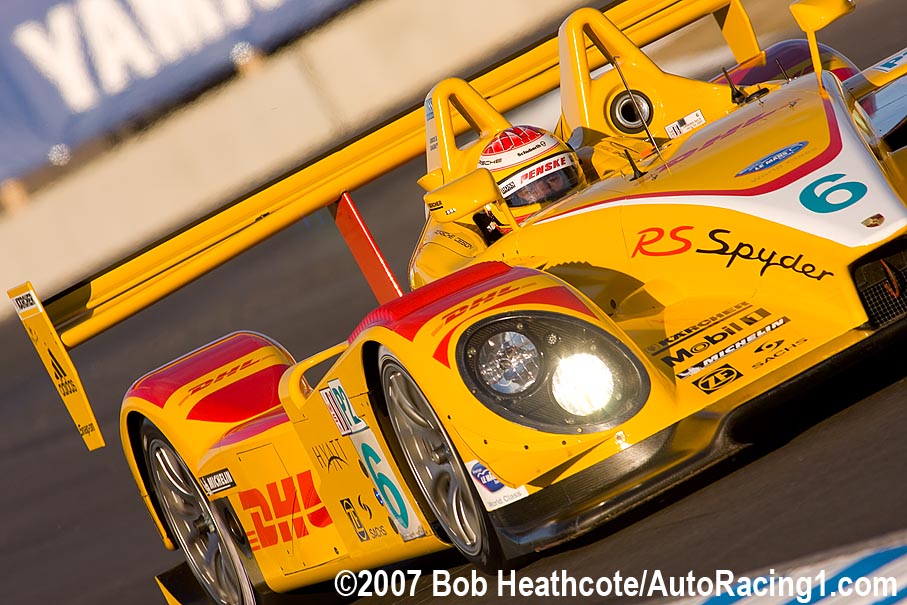 Sascha Maassen is looking for property on the Monterey Peninsula after Friday’s qualifying session for the Monterey Sports Car Championships. The Porsche factory driver qualified the No. 6 Penske Racing Porsche RS Spyder on pole position for the season finale of the 2007 American Le Mans Series season by leading a contingent of 13 cars that broke the track qualifying record (ALMS record, much slower than Champ Car lap record).

Maassen’s time of 1:10.528 and speed of 114.235 mph gave him his third straight LMP2 pole but first overall at Mazda Raceway Laguna Seca. He was 3.203 seconds under the former track record set by Stefan Johansson last year in a factory Zytek. Maassen also broke his own P2 record by 3.552 seconds.

“I may be thinking about living here now," Maassen quipped. “If I move to the US, it will be close to here. I like the circuit and the circuit likes me. The car is really good, and this track is made for our car because there are no big straights."

Indeed the four fastest cars were the nimble P2 entries, which thrive on the twisty 2.238-mile, 11-turn circuit. Maassen was 0.125 seconds ahead of teammate Timo Bernhard, who has clinched the P2 drivers title with Romain Dumas, in the No. 7 Penske Porsche. Tony Kanaan was third overall for Andretti Green Racing and Acura at 1:10.913 with David Brabham qualifying Highcroft Racing’s Acura fourth at 1:11.101.Laguna Seca, and he was a half-second better than Mike Rockenfeller in the No. 2 diesel-powered Audi.

Penske and Porsche have won 10 class races this year with eight of them overall victories.

The Porsche RS Spyder debuted at Mazda Raceway Laguna Seca in 2005 with a class pole position and, more importantly, a maiden P2 victory. Maassen qualified the car that year with a then-class record of 1:15.606. But improvements in the track – which has been made smoother with a recent resurfacing – and with the Porsche prototype combined for Friday’s record-breaking run.

“These five seconds are not all our car," Maassen said. “Part of it is the track which has improved. The track is better than it has been with more grip. Three to 3.5 seconds are the improvements that we made with the car. It’s a lot of work but it is worth it. Technology is advancing and everyone is doing the same. We don’t want to follow; we want to lead."

“It’s going to take quite a bit of luck and being very, very cute with the yellows and the traffic," McNish admitted. “The line gets quite narrow with the sand, and with a four-hour race and our fuel tank size (81 liters of diesel compared to 90 liters for E10-powered cars) it will be tricky. We have nothing to lose and we will attack."

McNish and Capello wrapped up the P1 championship with an overall victory at Petit Le Mans, a race that saw Capello beat Dumas to the checkered flag by 0.923 seconds after 1,000 miles. It was the type of competition McNish and the rest of the Audi crew live for, and he said as much Friday.

“These guys (Penske) are doing a very good job and with good drivers and a car that they are driving to the maximum," he said. “They are doing a job similar to what Audi Sport has done in the past and I take my hat off to them for it. I like the competition, and I think Petit was a very hard-fought win at the end. That proved that the two organizations are at their maximums."

McNish earned his first Laguna pole position and was a half-second better than Mike Rockenfeller in the No. 2 diesel-powered Audi. The Arena Motorsport Zytek 07S of Tom Chilton and Darren Manning qualified third in class at 1:12.785.

Jan Magnussen made the best of his return to Monterey with a GT1 pole position for Corvette Racing and the No. 3 Corvette C6.R. The Dane’s time of 1:19.304 was 0.36 seconds better than Olivier Beretta in the sister Corvette and also broke Terry Borcheller’s class record from 2005 by 1.003 seconds.

“It is a low-grip track now and different from what it used to be," Magnussen said. “The track surface feels slippery, although we are going faster than last year. This requires a special driving style. It’ll be hard in the race when you get off line because it will be so slippery. But it will be the same for everyone."

Magnussen and Johnny O’Connell are seeking their third class victory in four races. It’s pretty clear that Magnussen feels comfortable at Laguna; he won his last Series start here in 2003 by teaming with David Brabham with Prodrive and Ferrari.

“Both cars were great cars," Magnussen said. “The track and the surface has changed. I’m happy with the way everything has gone. We missed some time this morning after contact with a prototype. This is a new car for this race (after a hard crash destroyed the previous chassis at Petit Le Mans) and to get pole position for this race is a bonus."

The GT2 championship remains in play entering the weekend, and Jaime Melo fired the opening salvo for Risi Competizione and the Ferrari F403 GT. The Brazilian broke teammate Mika Salo’s class record in qualifying with a lap of 1:22.880 for a 0.410-second gap back to Petersen Motorsports/White Lightning’s Peter Dumbreck.

Salo and Melo hold a 22-point lead over the Flying Lizard Motorsports duo of JÃ¶rg Bergmeister and Johannes van Overbeek in the race for the drivers championship. The race winners receive 23 points. So even if Bergmeister and van Overbeek win, all the Risi pairing needs to do is complete 70 percent of the race distance and finish in the top-10.

“Tomorrow is a special day because we have the championship to win," Melo said. It’s very important for Ferrari and really need to concentrate to score the right amount of points. If we can win the race, we will go for that. But if there is too much risk we will readjust. You always drive with mirrors. We have to be very careful and stay out of trouble.

Bergmeister qualified third behind Dumbreck, turning in a lap of 1:23.353 in the Flying Lizard Porsche 911 GT3 RSR.

Salo won last year’s event with Stephane Ortelli for Risi, and Melo is hoping for a repeat in his first visit to the circuit.

“I like it very much," he said. “We had some problems in the morning session. I had a little bit of oversteer but I think we have a good setup for the race. It’s quite a European track. It’s really good and very fast. You have to be really careful with the slow speed turns."

The final round of the 2007 American Le Mans Series is the Monterey Sports Car Championships at Mazda Raceway Laguna Seca. The four-hour race is scheduled for 2:30 p.m. PT on Saturday, October 20. SPEED will air the race live from 5:30 to 10 p.m. ET. Live coverage from American Le Mans Radio and IMSA Live Timing and Scoring will be available at americanlemans.com.