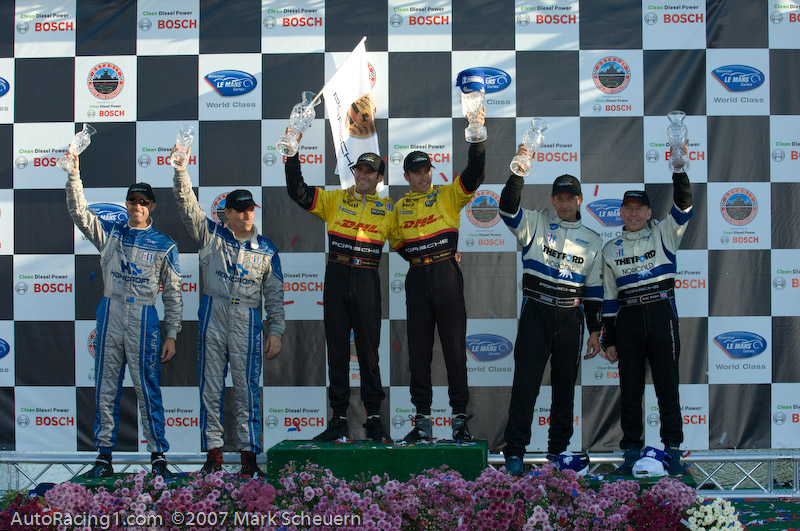 Romain Dumas and Timo Bernhard gave Penske Motorsports and Roger Penske an eighth straight overall victory in the American Le Mans Series on Saturday in the Detroit Sports Car Challenge presented by Bosch as auto racing made a triumphant return to the Motor City. Dumas beat Audi’s Emanuele Pirro to the finish by 5.948 seconds in a spectacular event.

Dumas’ Porsche RS Spyder passed the Audi R10 TDI of Pirro with three minutes left to go as the two prototypes exchanged the lead twice on one straightaway. The win was the fourth straight overall win and sixth of the season for Dumas and Bernhard, the LMP2 championship leaders.

“My car got better and better and had good front grip and it got easier to catch him and pass him," Dumas said. “I saw my car was more stable in the corners and took a different line than Emanuele and overtook him. I looked in my mirror and unfortunately there was a straight after the corner and thought this time that it wasn’t possible. At the next corner I braked outside and crossed the racing line. It was really fun to do."

Audi Sport North America appeared to be in position to capture its first overall win since March in its own backyard. Pirro led for 47 of the final 50 minutes but slower traffic forced him to go off-line and pick up old tire rubber as Dumas kept inching closer. That, combined with the Porsche’s ability to gain time in the corners of the tight circuit, sealed the outcome.

Team owner Penske was rewarded for the transformation of Belle Isle Park under his watch. The Captain’s cars had dominated qualifying by taking the front row, and the Penske Porsches were fastest in each on-track session of the weekend.

Porsche also wrapped up the manufacturer championship in P2.

“Roger put a really great race track here and it’s very nice," Bernhard said. “We wanted to give him a present like a class victory and maybe overall. Then we got the front row for the Penske team and he was very happy about that. That’s what the fans wanted to see – a Penske win and a close race to the end. It was a good show."

Pirro had taken the lead with 50 minutes remaining by using the R10 TDIs tremendous torque to pass three cars on a restart. The Italian and Marco Werner finished first in LMP1 for the third time this season by 12 seconds over the sister car of Dindo Capello and Allan McNish.

Like Porsche, Audi clinched the P1 manufacturer crown with the class win. But Pirro admitted there could have been another reason to celebrate especially after the restart. Audi would have been the car to score an upset victory this time as the Belle Isle circuit favored the less powerful but more nimble P2 cars.

“When you start to lead for so long you start to believe a little bit in the impossible," Pirro said. “At the end of the day we finished second after starting eighth. I can only be happy about it. We put on a very good show. After the final restart I started to get a lot of pickup on my tires. I saw him pushing me more and more. I had to drive around a slow car and by then I signed my life sentence and got too much pickup. I tried to pass him again on the straight but I couldn’t manage it.

The difference in the P1 race came near the 90-minute mark. Both Audis pitted for fuel, four fresh tires and driver change with the No. 2 crew winning the race in pit lane.

“Our strategy was really good," Werner said. “At the beginning and under the first yellow we did fuel and new tires and that was the key to going quicker than the P2s."

Second in P2 was Dyson Racing’s Butch Leitzinger and Andy Wallace, who were fourth overall. The No. 16 Porsche RS Spyder finished 0.327 seconds ahead of Stefan Johansson and David Brabham in Highcroft Racing’s Acura ARX.

Johnny O’Connell and Jan Magnussen took their third GT1 victory and second straight in their No. 3 Corvette Racing Corvette C6.R. The winning duo finished a lap up on teammates Oliver Gavin and Olivier Beretta after the two Corvettes were separated by an early safety car, which gained almost a full lap for the No. 3 Corvette.

“The car ran absolutely perfect," said Magnussen, who qualified on the class pole. “I was able to build up about a 10-second gap to when the safety car came out. It was a good place for us and took some pressure away. Things like that can happen here because of the street circuit."

The winning feeling definitely has returned to the No. 3 crew. After being a little snake bit earlier in the season, Magnussen, O’Connell and their team have looked like the dominant Corvette squad over the past two weeks.

It couldn’t come at a better time with the Corvettes racing at home in front of General Motors.

“If there is any one group of guys that I’m proud of, it’s the mechanics on the No. 3 cars. Through our drought, they never gave up," O’Connell said. “To finally get to show GM executives what the baddest hotrod GM builds and see what they only hear about from Le Mans is a magical moment."

Risi Competizione teammates Jaime Melo and Mika Salo won for the seventh time this year and third in a row in GT2. Melo in the No. 62 Ferrari F430 GT withstood a challenge from Porsche factory pilot Patrick Long after the final restart but finished 20.666 seconds ahead of the No. 44 Flying Lizard Porsche 911 GT3 RSR that Long shared with Darren Law.

“At the end it was quite difficult," Melo said. “After the safety car I had a lot of pick up on the tires and the car was sliding everywhere. After about two laps the Porsche was really close and it took four laps to get the grip. After that the car was great."

The winning duo had gained an advantage over most of the class during the first safety car period when they were part of the wave-by period. But Lizards gained their lap back late to set up the final chase to the checkered flag.

Melo and Salo strengthened their class championship lead over the Lizard duo of Johannes van Overbeek and JÃ¶rg Bergmeister, who saw their Porsche go up in flames when an oil line broke after contact with another GT2 competitor. The duo failed to complete 70 percent of the race and record championship points.

“It was a shame what happened to them but we’ve had some bad luck at points this year too," Salo said. “I hope they can be prepared for the next race. There is a little less pressure now certainly. We will still be going for wins."

The next round of the American Le Mans Series is the 10th running of Petit Le Mans, the annual 1,000-mile/10-hour endurance classic at Road Atlanta. The start is scheduled for 11:15 a.m. ET on Saturday, October 6. SPEED will provide live coverage from 11 a.m. to 1 p.m. and again from 6:30 to 10 p.m. American Le Mans Radio and IMSA’s Live Timing and Scoring will be available at www.americanlemans.com.