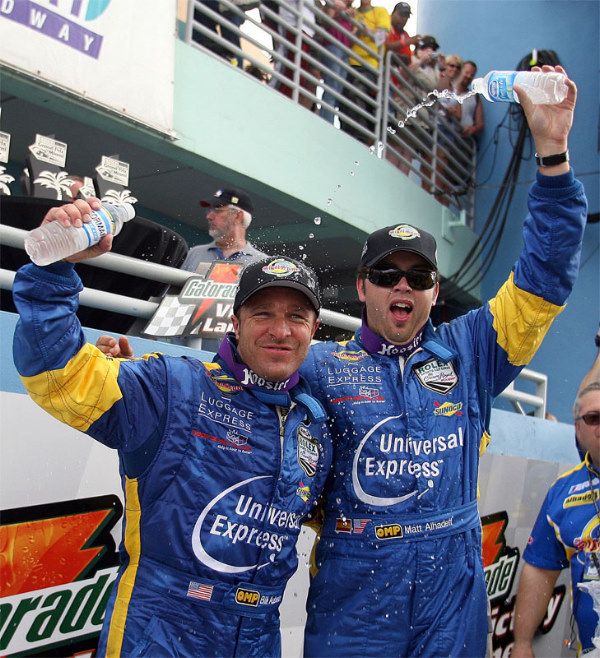 With 11 laps remaining, Auberlen swept to the inside of 2005 Daytona Prototype co-champion Max Angelelli in the No. 10 SunTrust Pontiac Riley in Turn 6 and came out with the lead in a textbook maneuver. Auberlen then spent the remaining laps keeping Angelelli and the rest of the field in his mirrors and the two-time Rolex Series GT champion went on to win the race by 1.759 seconds.

"First of all, it feels unbelievable," Auberlen said. "It came earlier than I even expected. I knew we had a learning curve with the car. The team had a gelling curve, where everybody has to come together. It’s all coming together so fast. We’ve got a good motor program now, and everything is good, so to win this one, it’s one of the best wins I’ve ever had. It was one of the hardest-fought wins I ever had to do.

"As far as the pass on Angelelli goes, on the restart before that, I was much faster than him, but it was like he drove in his mirrors. Everywhere I went, that’s where he wound up. I was like, ’I can’t go by, so I have to make myself invisible.’ If you put a Daytona Prototype right behind another one, they can’t see you. I tucked right up behind him to where I knew he couldn’t see me, waited for his brake lights to come on, and when he did that, I went just a second longer. It was too much for him. For him to do it, we would have had to wreck. I passed him, went out, and the car was strong."

For Alhadeff, who drove the first 21 laps before turning the car over to Auberlen under the day’s second of seven full-course cautions, it was his first professional race victory. It was the 25-year-old Alhadeff’s eighth Daytona Prototype start and 26th overall Rolex Series start in a career that began in 2005.

"This is one of the greatest days of my entire life," Alhadeff said. "I’m so happy for my whole team and for my family and for myself. We’ve been working so hard to do this. We’ve been there a couple of times and it’s gotten taken away from us for whatever reason. Now, we finally did it. It was a well-deserved finish, because we struggled in the beginning with some of things that happened on the track and a pit stop that wasn’t that great. Everybody just pulled through. Bill Auberlen, man, that guy is unbelievable."

Angelelli and co-driver Jan Magnussen held on to finish second for their best result of the season to date after finishing third in each of the first two races in the 2007 season. Magnussen started from the pole position and led a race-high 21 laps in his stint before turning the car over to Angelelli. Interestingly, the No. 10 machine has never won a race in which it has started from the pole position.

"Obviously, I’m very happy for the team," Magnussen said. "It looked for a while there like we were going to win this race, but Bill was very strong at the end and got a run on Max after the (Lap 80) restart. From my point of view, I didn’t do that many laps in this race, but I got away cleanly at the start and got a big gap. Everybody else was fighting behind me. I had a clean run. My car today was just great. Then I gave it over to Max and it was a really exciting race until the finish."

Angelelli led 15 laps before surrendering the lead to Auberlen. It was the 10th consecutive race that Angelelli and Magnussen finished inside the top five positions, and the performance enabled them to move to within one point, 92-93, of Daytona Prototype points leader Scott Pruett.

"I enjoyed the race," Angelelli said. "It’s what Grand-Am racing is all about. You cannot rest for a second or you will get passed. Bill really made a fantastic move. It really surprised me. When I saw him, I couldn’t believe it. If I knew he was there, I would have closed the door for sure, as I did before. I knew he was really strong the first two laps after (restarts) and I really wasn’t. He covered himself behind my car in the middle and I couldn’t see him in my mirrors, so he did really well. The race was difficult for everybody. My car behind the other DPs was really difficult, but I enjoyed it. I enjoyed the whole race."

Pruett co-drove the No. 01 TELMEX Chip Ganassi Racing Lexus Riley to a third-place result alongside Mexican racer Memo Rojas to keep the Daytona Prototype points lead by the thinnest of margins. It was Pruett’s second podium result of the season, the other being the overall victory in the season-opening Rolex 24 At Daytona with co-drivers Salvador Duran and Juan Pablo Montoya, and was the first podium result of Rojas’ Rolex Series career.

"I had a run on (leader) Ian (James) on the back straight, and was able to get inside of him and had the lead for a second or two, but just ran out of room and I didn’t want to get into him," Pruett said. "I had to get out of it a little bit and that allowed Max to get by and he brought the 05 car with him. It was a scrap out there all race long. That’s what Grand-Am racing is all about. We had a strong effort from everyone – Memo did a great job, Lexus did a great job and really the whole Ganassi team was terrific."

"I’m happy with my first podium," Rojas added. "The racing was really tough. It seemed like we were always in a battle trying to get to the front. In the end, I think any of the cars that were running up front had a chance depending on traffic. It was really good racing."

Patrick Carpentier and Milka Duno continued their strong early season performance with a fourth-place performance in the No. 11 CITGO/SAMAX Pontiac Riley. It was their second top-four result of the season to go with a second-place run in the Rolex 24 At Daytona, and kept Carpentier and Duno within 13 points of Pruett in the point standings.

Floridians Hurley Haywood and JC France rounded out the top five in the No. 59 Brumos Porsche/Kendall Porsche Riley. It was the duo’s second top-five result in three races to go with a fourth-place performance in the Rolex 24 At Daytona.

James led 15 laps on his way to a 12th-place result in the No. 6 machine with co-driver Henri Zogaib, and Christian Fittipaldi led nine laps before finishing 14th with co-driver Harrison Brix in the No. 39 Crown Royal Special Reserve/Cheever Racing Porsche Fabcar.