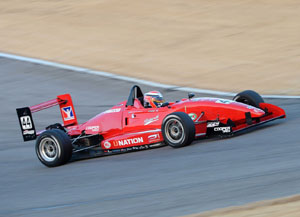 After a successful first year together in 2017, Formula Race Promotions (FRP) and the United States Auto Club (USAC Racing) will extend their sanctioning agreement for the 2018 seasons of the Atlantic, F2000 and F1600 Championship Series. The seasons open at Road Atlanta, April 20-22 and continue with stops at Watkins Glen, VIR, Mid-Ohio, Pittsburgh and Summit Point.

USAC made its return to road race sanctioning in 2017, working with FRP to offer a number of initiatives for drivers and teams, including a streamlined race entry and season registration system.

The popular system will be approved upon and brought back in 2018, offering an easy online portal for drivers, crew and teams.

In addition, USAC and FRP worked closely together on multiple marketing initiatives to better connect oval and road racing communities and plans call for expanding this program going forward.

“We can’t say enough about our first year with USAC in 2017 – they were a terrific partner in helping us offer a premiere first-class race and event environment to competitors in F1600, F2000 and Atlantic," commented FRP Co-Owners Al Guibord and Robert Wright.

“USAC is thrilled with our first year as the sanctioning partner of FRP, and are proud of the new partnership," added Kevin Miller, president of USAC. “The racing action we witnessed was world class and we are looking forward to another great year in 2018."