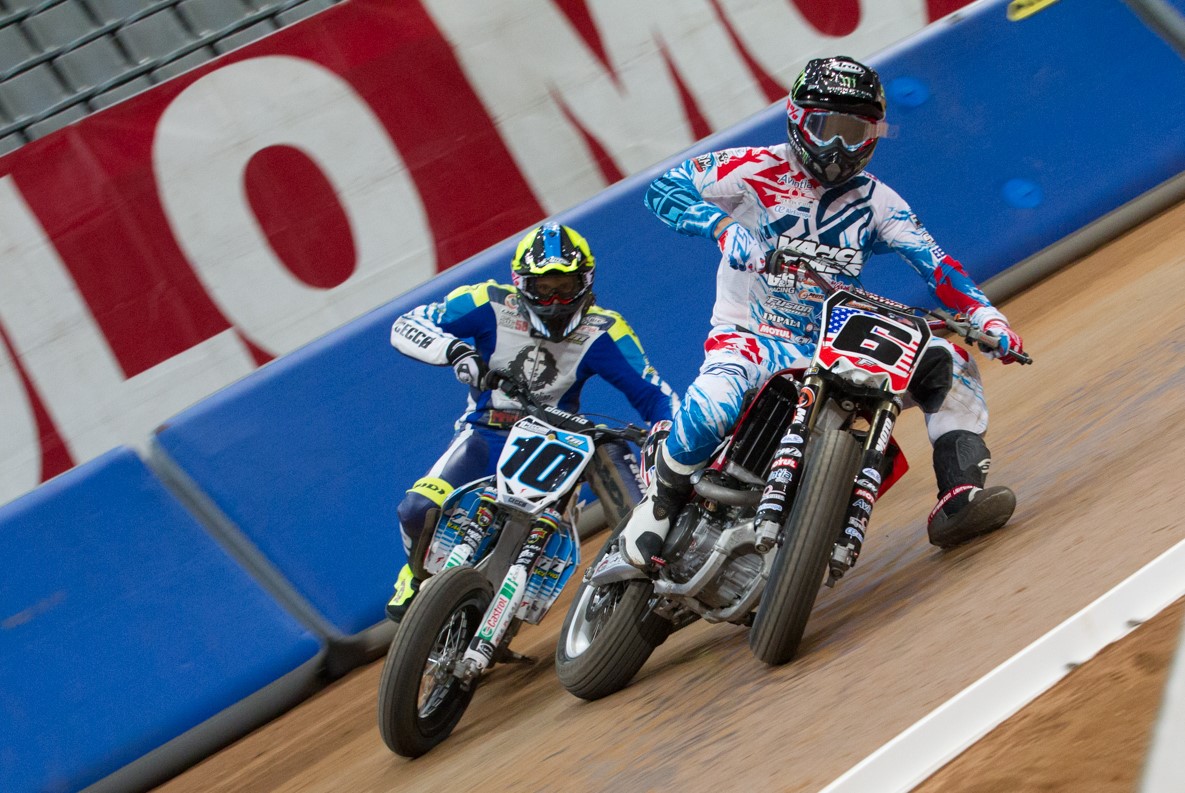 Two names topped the list in today's Superprestigio test day at Barcelona's Palau Sant Jordi, neither of which was American Flat Track's Brad Baker. Rather, it was three-time, defending MotoGP World Champion Marc Marquez topping the field in the Superprestigio class, and British flat track racer Oliver Brindley at the top in the Open class.

Although Baker prefers being on top of the time sheets, his priority is winning the final race, not impressing with just one fast lap. With only two five-minute sessions of testing at the Palau before tomorrow's Superprestigio, Baker focused his attention on setup.

"I felt really smooth and comfortable in the first session," Baker said. "The track is always best the first session out and grip was really good. As the track gets more and more sessions on it, the less grip it has and the more technical the track gets. That's when discipline comes in to play. It's going to be a very difficult track to overtake, other than riders making mistakes. I try to focus on not necessarily setting the fastest time, but setting consistently fast times; just repetitive laps and working on lines, and focusing on being able to make passes on people."

Marquez was quite happy to top his class, but was impressed with the level of competition and knows that it will not be easy to top tomorrow's podium. He too has improved his level and has learned something from the Americans.

"Every year I always learn something from Brad (Baker)," Marquez said. "This year we did another improvement. You see all the bikes are a little higher this year. Everyone follows the American riders and we improve. The lap times are more competitive."

In addition to Brad, Marquez thinks he'll have a few other challengers, mainly the top three guys in each class, but was especially impressed with Open class riders Brindley and Cardus. Baker has been training with Cardus over the last three weeks in Spain, and was impressed with the Spanish Champion's performance and growth as a racer in those three weeks. Next up for the international standout, Cardus will try his hand at American Flat Track competition in the AFT Singles class on March 16 at the series season opener – DAYTONA TT.

The level has definitely increased for the fourth running of the event, and although it's only an exhibition race, racers are racers. They all want to win, especially Baker, who has a target on his back as the 2013 Grand National Champion.

"As these guys said, the intensity in the paddock is higher than what it's been in the past," Baker said. "It's still friendly, obviously there's less pressure for the riders because this is a fun event. It's a fun event for me as well, but I'm a dirt tracker. Every year the pressure gets a little bit higher because obviously the expectation is for me to win. From America, from Europe… The pressure's on. But I'm excited. I'm not worried, by any means. I feel good, I've got a good bike underneath me. The plan is to win again."

World Champion Marquez has the same plans, and would very much like to beat Baker for the first time and tie the American Flat Track racer with Superprestigio wins.

"In the dirt track race the start is everything," Marquez said. "You need to also be lucky. In the races in the end the guy that finishes in front is the best guy. You need a good start, good speed, good battles, so we will see. Of course I will try but we don't know."