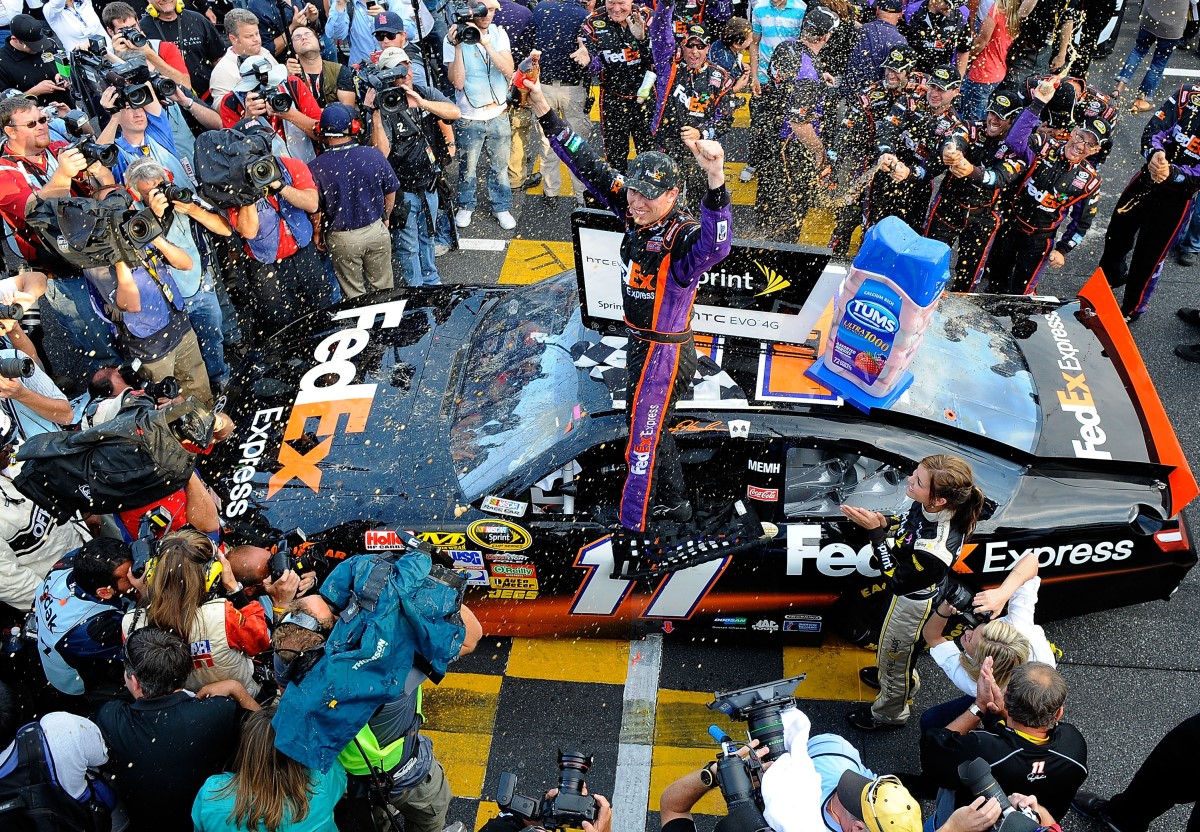 HAMLIN’S VIRGINIA VICTORIES: Camry driver and Virginia native Denny Hamlin won the 2015 spring race at Martinsville Speedway, marking his fifth-career NASCAR Sprint Cup Series (NSCS) victory at the 0.526-mile short track in his home state. Among active drivers, Hamlin has the second-best average finish at Martinsville (8.0) in the NSCS with five wins and 16 top-10 results in 20 starts on the paperclip-shaped track. This year’s Daytona 500 champion also ranks second in average starting position at Martinsville (9.8) as well as laps led with 1,315 laps.

CLOSE QUARTERS: After a three-race West Coast swing and an off week, the NSCS now moves to Martinsville for the first short-track contest of the 2016 season. In 2015, Joe Gibbs Racing Camrys tallied five top-five results in the two Cup races at Martinsville, including Hamlin’s spring triumph. Camry drivers Kyle Busch and Matt Kensethrank tied for seventh in average finish position among active drivers at Martinsville (15.1), however both are still seeking their first NSCS win at the track.

SUAREZ STILL TRUCKING: With the NASCAR XFINITY Series (NXS) in an off weekend, points leader Daniel Suarez will compete in the No. 51 ARRIS Tundra in the NASCAR Camping World Truck Series (NCWTS) at Martinsville Speedway. Suarez claimed sixth in his first trip to the Virginia track in 2015 before finishing 16th in the fall NCWTS race. The 2015 NXS Rookie of the Year is still seeking his first NASCAR national touring series win, but has three runner-up results in the NCWTS and two in the NXS. In XFINITY competition, Suarez has recorded 11-consecutive top-10 results dating to the 2015 season.

What do you need to have success this weekend?

“I think it will be another fight this weekend to get the win at Martinsville. We have had a lot of success over the years at that track and seem to battle the same guys each year for the win. Jimmie (Johnson) is obviously strong there and our teammates will be tough to beat. Friday’s qualifying is big in terms of getting a good pit stall and on Sunday it’s important to have a mistake-free race. Any sort of issue or penalty can get you a couple laps down in a hurry and spoil a good day. I believe our FedEx Camry will be up front competing for another win."

How have you improved at Martinsville Speedway?

“Dave Rogers (crew chief) and this No. 19 crew like a challenge – getting me to victory lane at Martinsville is going to be a good one. I have struggled there, but I truly have no reason not to run well at this race. It’s because I’ve got great cars and great teammates. Denny Hamlin’s help last year really stepped up my performance there. We ran really well in the spring last year. That was really a turning point for me. We learned a lot and hopefully we can build on that. We’ve been having some great runs. We’ve been performing really well, leading laps, we’ve had fast cars in qualifying and we feel like we have a really good plan."

What has changed in how you look at Martinsville Speedway?

“There wasn’t much I enjoyed about racing at Martinsville until I came to Joe Gibbs Racing and they’ve really just helped me to run better there and I’ve learned a lot from my teammates and have gotten some pretty competitive runs in, so I’m looking forward to this weekend. Martinsville is always one of my biggest challenges of the year, but it can be a lot of fun when our cars are running well."

NASCAR XFINITY Series (NXS): Camry drivers Daniel Suarez (first) and Erik Jones (seventh) currently rank in the top-10 in the NASCAR XFINITY Series (NXS) point standings …Suarez has registered five-consecutive top-10 finishes to start the 2016 season and has 11 in a row dating to 2015 … The NXS will enjoy an off weekend before next racing at Texas Motor Speedway on Friday, April 8.

How do you feel headed into your first Martinsville Speedway start?

“Martinsville has flat hairpin turns, doesn't have any banking and it’s pretty slow. Coming from the dirt world, it doesn't really fit my style, but I know that Jerry’s (Baxter, crew chief) had a lot of success there and that will help speed up my learning curve. Having Kyle (Busch) as a teammate this weekend will also be a big help and I'm looking forward to that. Now I just need to stay out of trouble and bring home the finish that my team deserves."

Are you looking forward to racing at Martinsville Speedway in the Truck Series?

“Any time that I can get behind the wheel of one of our Tundras, I always enjoy it and look forward to racing in the Truck Series. With having a couple of young guys driving for us at KBM (Kyle Busch Motorsports) this year, it will be a great opportunity to work alongside of them as a teammate. It’s a lot easier to answer any questions they might have when you are actually in the truck at the same time and experiencing some of the same things, as opposed to giving them direction based on your past experiences. It will be especially helpful this weekend since I haven’t raced in a Truck Series race at Martinsville since 2011. The last two or three times that I did race the trucks at Martinsville we came really close to getting a win and collecting a grandfather clock – hopefully we can finish it off this time. I’ve been able to get to victory lane as an owner at Martinsville, but not as a driver, so the goal this weekend is to change that and hopefully leave with a pair of them."

What do you have to do to be successful at Martinsville Speedway?

“It's just short track racing – what we grew up doing – which is all I've ever known until I started racing in the NASCAR Camping World Truck Series. I worked with Junior (Carl Joiner, crew chief) in the Southwest Series racing on all those short tracks, so that's what we know and we work well together and communicate well on what we need."

Austin Wayne Self, No. 22 Tundra