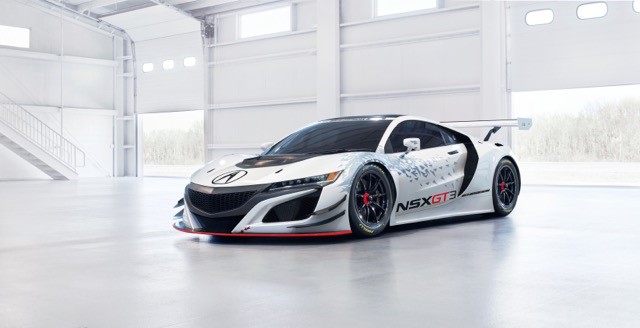 NEW YORK, NY – Acura took the wraps off a NSX GT3 racecar today at the 2016 New York International Auto Show, announcing its intention to campaign the twin-turbocharged NSX supercar in North America starting in 2017. The NSX is currently undergoing testing and slated for homologation as an FIA GT3 class racecar this fall.

The unveiled Acura NSX GT3 racecar featured custom bodywork and aero components including a large deck wing spoiler, underbody diffuser and enlarged hood vents for efficient engine cooling. The NSX GT3 will be powered by a 3.5-liter, 75-degree, twin turbocharged DOHC V-6 engine using the same design specifications as the engine in the production 2017 Acura NSX, including the block, heads, valvetrain, crankshaft, pistons and dry sump lubrication system. The engine will be paired with a 6-speed, sequential-shift racing gearbox, delivering power to the rear wheels.

The NSX GT3 will utilize the production NSX’s ultra-rigid and lightweight multi-material body with aluminum-intensive space frame, which will be produced by the Performance Manufacturing Center in Ohio, the exclusive manufacturing home for the new Acura NSX. Its twin turbocharged V-6 engine will also be manufactured in Ohio.

“The NSX was designed as a pinnacle expression of Acura Precision Crafted Performance, and we’re looking forward to proving out its ultimate performance capabilities in GT3 racing," said Art St. Cyr, president of Honda Performance Development. “We’ll be working with the NSX engineering teams in Ohio and Japan to bring our dream of a truly world-class new Acura NSX racecar to fruition."

The Acura NSX GT3 car will join a rich legacy of Acura sports car racing campaigns and championships, including the 1991, 1992 and 1993 IMSA Camel Lights manufacturer and driver championships, and the 2009 American LeMans manufacturer, driver and team championships in both the LMP1 and LMP2 classes. Acura currently campaigns a pair of TLX GT cars with Real Time Racing in the Pirelli World Challenge.

The production 2017 Acura NSX launches this spring with serial production slated to begin in late April at the Performance Manufacturing Center. Customer order taking commenced on February 25, 2016, with the launch of the NSX online configurator at NSX.Acura.com.