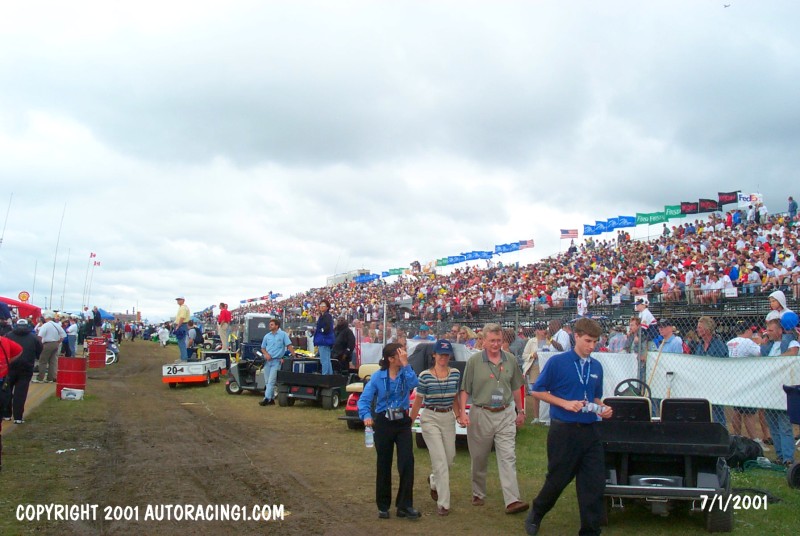 Just say "Grand Prix of Cleveland" and auto racing fans – both local and afar – can hear the roar of the engines.

It has been eight years since the open wheel cars were speeding around the 10-turn 2.106-mile temporary circuit at Burke Lakefront Airport. One would think hopes of reviving what was once a 25-year summer staple on July 4th weekend in Cleveland would have faded by now. That is not the case.

"IndyCar fans have been clamoring for a return to Cleveland and the racy runways of Burke Lakefront Airport and, suddenly, there appears to be hope," Robin Miller wrote in the March 31, 2015 edition of Racer Magazine.

That hope, at least for 2016, has now come and gone. But make no mistake, unlike the past, a return to Cleveland is beyond idle talk.

Privately, behind the scenes, the major hurdle of having a title sponsor was in hand for 2016 with the understanding that again getting FAA approval to use Burke Lakefront Airport would not be insurmountable.

The challenge, and ultimate monkey wrench, was getting a favorable summer date that also had a coveted TV window. When IndyCar announced in May a 2016 race for Boston, that closed the 2016 window of opportunity for Cleveland.

But that also could set the stage for a timely return in 2017 – 10 years since the last Cleveland race – if all interested parties can come together. That will not be easy as 2016 will be focused on the 100-year anniversary of the Indianapolis 500 for open wheel.

Still, according to IndyCar CEO Mark Miles, who spoke with The Plain Dealer during the 2015 Indianapolis 500, a hoped-for return to Cleveland is on the radar, if the logistics and finances can be worked out.

For all the groundwork already done, a crucial step remains: getting IndyCar representatives, potential sponsors, race promoters and city of Cleveland officials all in one room, at once, to solidify the deal.

"The elephant in the room right now is the (2016) Republican National Convention,'' said Ken Silliman, chief of staff for Cleveland Mayor Frank Jackson. "Getting the funds together for that, last year, this year and next year, realistically keeps us from looking at other big summer events until after that.

"But what Mayor Jackson is hoping for is the (RNC) convention to be a catalyst, not just to put a new national look on the face of Cleveland, but also to help generate more summer events in the future.

"The race, as we know, was a great community event that everyone looked forward to. When we did have it, it was good for the city. But it did require quite a lot of work.''

How did it end?

The event also struck a positive note on several levels, from being a showcase event for the city, to being a prime draw for out of town tourism, to being a fast track for competitors complete with some of the best and historic races in modern open wheel.

The ability to see practically the entire circuit from any grandstand seat made for great TV and was a plus for the fans. And the drivers never felt confined as the wide runways and taxiways for corner passing or straightaway speed made for often daring racing.

But a racing feud within the open wheel ranks combined with a longstanding challenge of financing for the event ultimately led to its demise.

The open wheel split in 1996 led to two factions – The Indy Racing League and Championship Auto Race Teams – with the IRL focusing on strictly oval racing anchored by the Indianapolis 500, while CART focused on multiple disciplines (ovals, road courses and street courses).

At the same time as familiar racing names retired, NASCAR grew in popularity and the open wheel fan base shrunk. By the time the two factions merged back together in February of 2008 there was still collateral damage.

The 2008 schedule could not accommodate all events from both series. Cleveland was among the races dropped. And while IndyCar has consistently said it would love to have Cleveland back, that return comes at a high price.

"After the merger, (sanctioning) fees, as I recall, almost trippled,'' Silliman said. "We tried for a year or so to generate the funding, but it just did not come together."

Adding to the cost was setting up and tearing down the race course at the airport to reopen for air traffic. Clearing barriers and TV camera stands from around the track and in the pits, often within hours after the finish of the race, and during a holiday weekend, made for an expensive event, even with its rewards.

"One of my fondest memories was, I got a call from the New York Yankees who wanted to land in Cleveland less than four hours after the race,'' former Burke commissioner Mike Barth said recently. "We worked to get that airport open in a matter of three hours. It was a great exercise to show how we could operate not only as an airport and a race facility, too. The Yankees came in on time in a 727, landing at Burke. It was wonderful.

"That was a great showcase event on a lot of levels, and really showed off the city in a positive light both to the public and behind the scenes. I miss that race, and was happy to be a part of it."

Coming up with the sanctioning fee, which insiders say can currently top $1.5-million, remains an issue. But that potential local sponsor could be resurrected, after 2016. As for promoting the event, and staging it, many who were key to its success in the past say they would love to be involved again, including the last race promoter, Mike Lanigan.

"We have had lots of interest to go back to Cleveland, and I can't think of a better venue in the midwest,'' said Lanigan, who is also part owner of an open wheel race team with David Letterman and Bobby Rahal.

"We will continue to work hard on finding some financial help in the future,'' Lanigan said. Elton Alexander/Plain Dealer