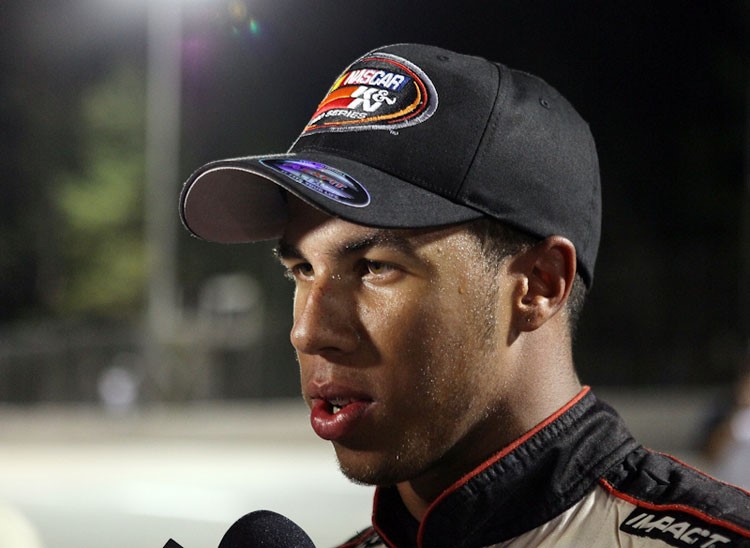 Roush Fenway Racing has announced that Bubba Wallace will drive the No. 6 Ford Mustang for the team in the NASCAR XFINITY Series (NXS) next season. The signing pairs NASCAR's winningest NXS team with a young driver widely regarded as one of the most talented up-and-coming competitors in NASCAR. The 21-year-old Wallace has posted five wins in the NASCAR Camping World Truck Series, including four trips to victory lane in 2014.

"I've had a remarkable journey over the last few years thanks to people who have put me in a position to win the races that I have," said Wallace. "When I first joined the sport, many said I would never compete with the real drivers. Now, as I join the winningest team in NASCAR history, I take that as a responsibility to add more wins to the team's legacy and help tear down the barriers for the next generation of NASCAR drivers."

"We are very excited to bring Bubba Wallace into the Roush Fenway fold," said team president Steve Newmark. "He is viewed in industry circles as one of the brightest young drivers and I feel that we are very fortunate to be able to bring him on board. He has a charismatic personality and at the same time has exhibited the ability to win on the race track. We are looking forward to getting him in our race cars next season."

In 2013 with his victory at Martinsville Speedway, Wallace became the first African American driver to win in one of NASCAR's three national series since 1963. He has competed in six career NXS races, earning four top-10 finishes and a pole at Dover International Speedway.

"We are certainly pleased to have Bubba Wallace come on board," said team co-owner Jack Roush. "He is certainly a great young talent and I feel it will be mutually beneficial for us to be able to put him into a team environment with a veteran driver like Elliott (Sadler) and the young guys Chris Buescher and Ryan Reed. We have had a great deal of history in the NASCAR Xfinity Series and we are happy to have Bubba as the latest piece of that rich legacy."

"We're thrilled to have Bubba Wallace be part of our Ford Mustang racing efforts," said Jamie Allison, director, Ford Racing. "His winning performances since becoming part of NASCAR's Drive for Diversity program have certainly made him one of the drivers in the sport to watch in the future, and we think he can bring a lot to Roush Fenway and Ford, both on and off the track."

Wallace's racing career started in 2004 when he began competing in Jr. Sportsman Champ Karts. He finished his first season second overall in points at the Carolina Asphalt Racing Winter Series. He moved to Bandoleros in 2005 and won an amazing 35 of the 48 races and posted 40 top-five finishes. He became the first driver to win five races in a single week. In addition, he competed against much older competition in the Outlaw Division and won all but one race in 2005.

Wallace moved up to Legends in 2006 and completed a phenomenal rookie season with 11 wins, 27 top-five and 34 top-10 finishes in 38 total starts. He started racing Late Models in 2007, competing in the final five races of the UARA Touring series.

Born in Mobile, Ala., Wallace and his family moved to North Carolina for his father's work when he was just two years old. He also played basketball, before fully concentrating his efforts on his racing career. Wallace also enjoys sharing his love for photography and life as a professional race car driver through his Twitter (@bubbawallace), Instagram (@bubbawallace) and Facebook (fb.com/bubbawallace) accounts.