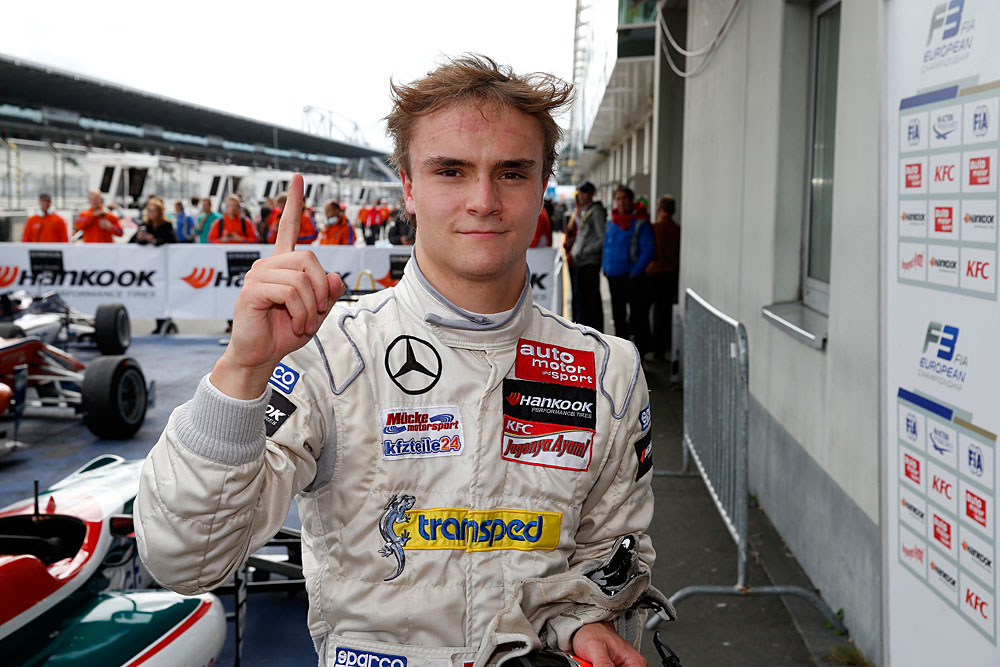 Lucas Auer (kfzteile24 Mucke Motorsport) became the winner of the 27th season race of the FIA Formula 3 European Championship. In a tight battle, the Austrian came out on top from Tom Blomqvist (Jagonya Ayam with Carlin) and thus claimed the first win for his team kfzteile24 Mucke Motorsport since the weekend at Pau, early May. Max Verstappen (Van Amersfoort Racing), who was dropped ten places on the grid following an engine change and thus started twelfth, ended up third at the 3.629 kilometers long Nurburgring sprint circuit. In the FIA Formula 3 European Championship drivers’ standings, the 16-year-old Dutchman remains in second place behind Esteban Ocon (Prema Powerteam). The Frenchman already retired after a collision on the opening lap, but still has a 77 points’ lead from Verstappen, who recently was integrated into the Red Bull Junior Team.

The opening stage of the race already provided plenty of action with an accident in the first corner. Antonio Giovinazzi (Jagonya Ayam with Carlin) and Esteban Ocon collided and spun. Nicholas Latifi (Prema Powerteam) couldn’t avoid the two cars and Dennis van de Laar (Prema Powerteam) damaged the rear of his car after contact with Latifi. After the incident, the safety car was deployed.

Racing resumed at the start of lap five. Lucas Auer took the opportunity and mounted an attack on Blomqvist, after which he was able to overtake him. On lap ten, the Austrian briefly had to slot in behind Blomqvist again, but he successfully countered straight away and claimed back the lead. He defended his first place until the checkered flag was out. Behind Auer and Blomqvist, Max Verstappen kept Antonio Fuoco under pressure in the battle for third, but initially, the Italian stayed in front. Only two laps before the end, Verstappen managed to overtake Fuoco and bring home third place. Behind Fuoco, the protégé of the Ferrari Driver Academy, in fourth, Jordan King crossed the line to finish fifth.

Lucas Auer (kfzteile24 MÃ¼cke Motorsport): “I made a good start, after which I was able to move up into second place right away. During the safety car phase, it was clear that my only chance to overtake Tom would be to mount an attack right after the restart, and that is what I did. But even though I have won here, we are still lacking the speed to be in contention for victory on a regular basis."