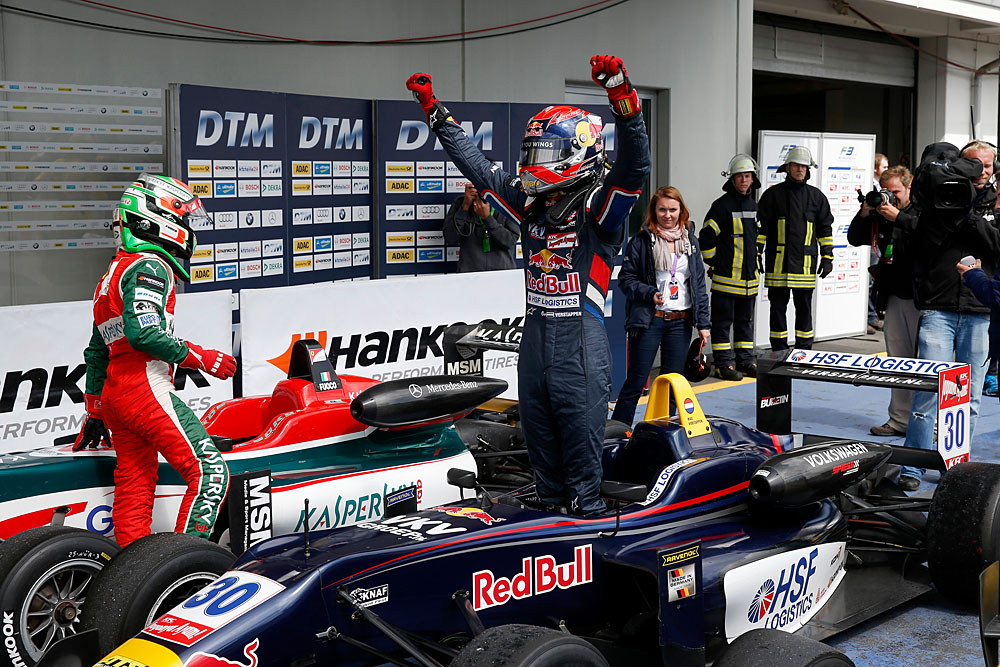 Max Verstappen (Van Amersfoort Racing) had a perfect start as a Red Bull Junior Team member: at the Nurburgring, the 16-year-old won his first outing in the colors of the Austrian Formula 1 World Championship-winning team. At the 3.629 kilometers long sprint circuit, he won the entertaining 25th FIA Formula 3 European Championship season round from Antonio Fuoco (Prema Powerteam) and Antonio Giovinazzi (Jagonya Ayam with Carlin). At a drying track, the Dutch rookie driver scored his eighth win of the season and was thus able to reduce the gap to the championship leader. Frenchman Esteban Ocon (Prema Powerteam), who finished sixth in the NÃ¼rburgring race, remains on top in the drivers’ standings.

The race started at a still wet, but already drying track. Nevertheless, three drivers took the risk of starting with rain tires: Richard Goddard (ThreeBond with T-Sport), series’ novice Wing Chung Chang (Team West-Tec F3) and Michele Beretta (Eurointernational). Especially Goddard, who had started from 20th place, benefited from his initial tire advantage and took the lead on lap seven. On lap 13, he lost it again because his rain tires degraded and in spite of a spirited drive, he was left without a chance against the faster Max Verstappen. In the remainder of the race, the Australian dropped back more and more and eventually crossed the finish line in 19th place.

Out in front, Verstappen only managed to pull clear from his main rival Antonio Fuoco, while the latter had his compatriot Antonio Giovinazzi in his rear-view mirrors until the end of the race. Jordan King (Carlin) took the checkered flag in fourth place from Tom Blomqvist (Jagonya Ayam with Carlin) and Esteban Ocon, who battled for a long time. Lucas Auer (kfzteile24 MÃ¼cke Motorsport), Felix Rosenqvist (kfzteile24 MÃ¼cke Motorsport), Santino Ferrucci (Eurointernational) and Edward Jones (Carlin) rounded out the top ten in a race that had plenty of excitement.

Max Verstappen (Van Amersfoort Racing): "We knew that the track here dries out quickly, so therefore we opted for slick tires. I reckon that this was the right choice, even though the first few laps with slicks weren’t easy. When Richard Goddard overtook me, I was well aware that his rain tires wouldn’t last that long anymore, because at that time, he was already trying to cool his tires all the time. Therefore, I didn’t defend my position too heavily against his attacks and I just tried not to let him pull away too much."