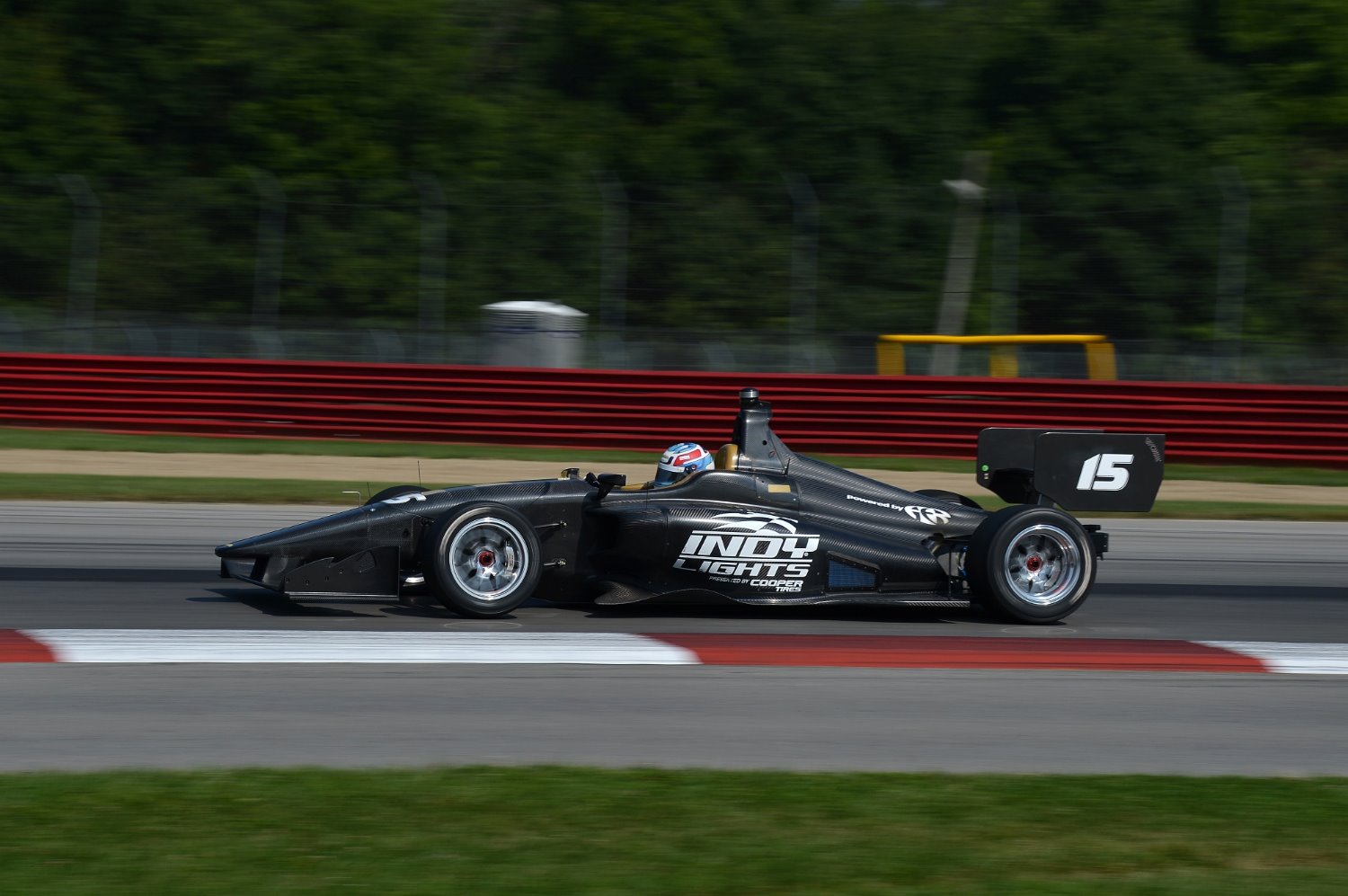 The future of Indy Lights Presented by Cooper Tires was in evidence yesterday as 2011 Pro (Star) Mazda champion, 2012 Indy Lights champion and 2013 Verizon IndyCar Series Rookie of the Year Tristan Vautier put the brand-new AER turbo-powered Dallara IL-15 chassis through its paces for the first time during an exclusive test session at the 13-turn, 2.258-mile Mid-Ohio Sports Car Course.

The exciting new car which incorporates advanced electronic controls and all the very latest safety features, was shaken down briefly last week at Putnam Park Raceway, just west of Indianapolis, but yesterday marked its first full day of development testing. The car performed flawlessly, with Vautier taking advantage of perfect weather conditions to complete a total of 85 laps, including a best lap already a half-second faster than Jack Harvey's pole time from the weekend's Grand Prix of Mid-Ohio Indy Lights double-header.

"The goal was to come here and do mileage, which we achieved," said President and Founder of NZR Consulting Tony Cotman, who has been responsible for the bid and design process of the new car. "The car is obviously very fast, so that's good. As I have said all along, it is important for us to get the car in a position that, when the teams get it, all the bugs are sorted out and we can give them a pretty good baseline. It was a lot of work to get the car put together the last couple of weeks and all the partners have done a fantastic job and given us a good starting point."

"We are extremely satisfied with the very first official test for the IL-15," added Stefano De Ponti, head of Dallara's U.S. operations. "There's a lot of happiness for the great job we have done as a group together with Dan Andersen, Tony Cotman, AER, everyone. The car seems to be working very well and the driver is happy. We are looking ahead now for more testing to develop the car to check for more reliability and more speed."

The day began just a few minutes after 9:00 a.m. with Vautier completing several installation laps to confirm that an oil system glitch, which had created excessive back pressure and resulted in restricted running last week, had been rectified. Vautier then moved on to longer runs, including a series of 15-lap stints during the afternoon, by which time the ambient temperature had risen into the 80s.

"My first impressions are that the engine is great, the drivability is already right there and the gearbox is amazing," said Vautier following his morning runs. "The brakes I think are the biggest step forward. They are really, really good. The balance was off at the start obviously, but we made a couple of small changes and the car came alive.

"A really good day," he concluded following an extremely productive afternoon. "It went very smoothly. We didn't have any major issues which is always good with a brand-new car, and we finished faster than the pole position that was set this past weekend with a 1:13.40. The car is a lot of fun to drive. It's a blast. Everything about it is better than the old car. It's a proper car that prepares drivers better for IndyCar as well. It has very similar characteristics in the way it responds on track – better braking, better acceleration, better everything. So, definitely a lot of potential."

The Frenchman's thoughts about the car echoed those of 2010 Pro Mazda champion, Indy Lights race winner and current GP2 Series competitor Conor Daly, who had been entrusted with the initial shakedown duties last week.

"I think it's a massive step in the right direction for the series," said Daly, who was on hand in the morning before having to leave for a sponsorship meeting. "It's awesome to be honest. The experience I have got now over in Europe from racing basically all of the Dallaras that are on the market, it's cool to experience this new one and I think it's what the series needs. It's big, it's fast, it's high-tech – it's the future."

The distinctive sound of the turbocharged, 2.0-liter, four-cylinder AER P63 engine attracted many positive comments, as did the fact that it ran flawlessly all day.

"I think the first test went exceptionally well for everyone involved – chassis, brakes, engine, transmission," said AER Engineering Manager Andrew Saunders. "There were virtually no issues. All systems were working and there was no real attempt to fine tune the car. We were just trying to get miles on it which we achieved. I'm looking forward to Indianapolis and running a wide-open throttle on the Speedway."

Testing will continue at the Indianapolis Motor Speedway oval on August 12 and 14 with a four-day test scheduled for the Speedway road course beginning August 18. Vautier and Daly will continue sharing driving duties.

"This really has been a tremendous day," said Dan Andersen, Owner and CEO of Andersen Promotions. "The level of teamwork in this project has been exceptional and I have to congratulate Tony and all of our partners including Cooper Tires for a job well done. To see a brand-new car perform so well right out of the box bodes extremely well for the final product our teams will receive."

08/04/14 The RACER Channel was at Mid-Ohio to cover the first day of testing with the brand-new Dallara IL15 Indy Lights chassis that will make its competition debut in 2015….assuming anyone can afford to buy the new car. So far the number of orders = 0.00