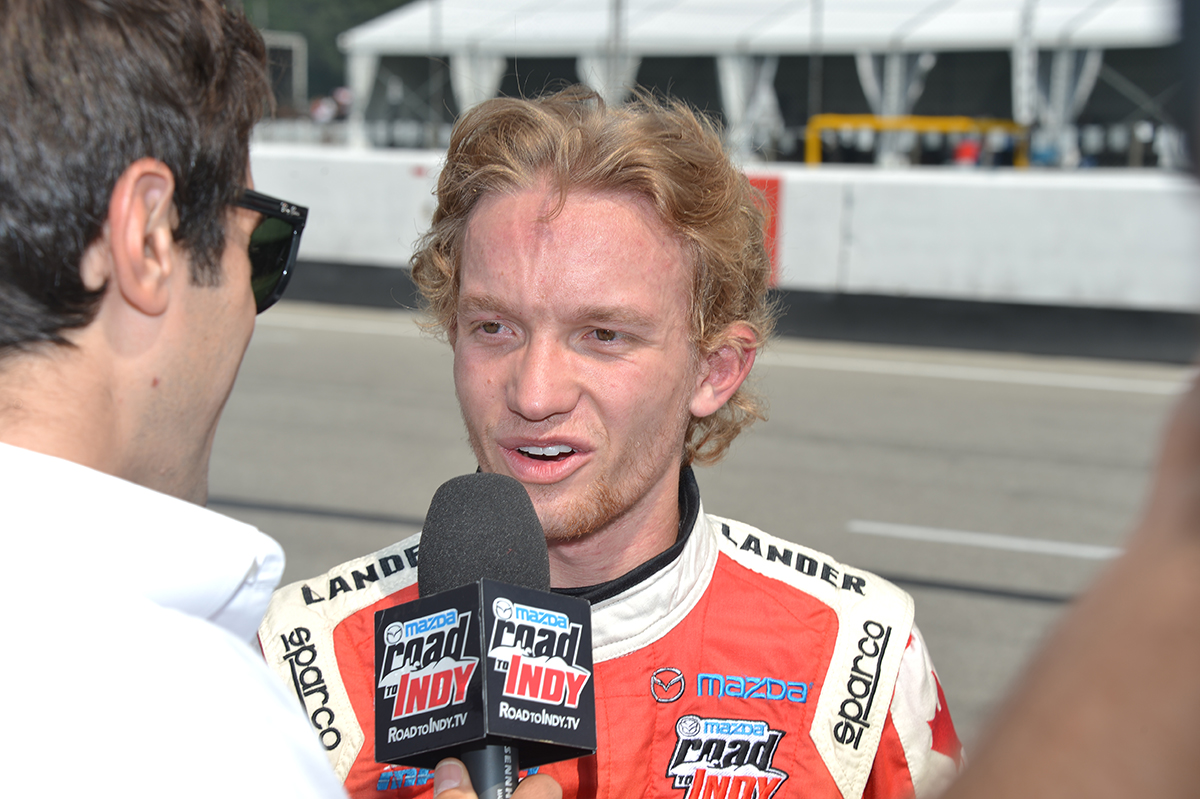 Lexington, Ohio – Garett Grist lined up third on the grid for this morning’s Cooper Tires Pro Mazda Grand Prix at the Mid-Ohio Sports Car Course, Round 11 of the Pro Mazda Championship Presented by Cooper Tires, but he didn’t stay there for long. The 19-year-old from Grimsby, Ont., Canada pounced at the rolling start, moving alongside front row starters Nicolas Costa and Kyle Kaiser on the drag race toward Turn Four before taking the lead with a bold maneuver to secure the inside line – and the lead – into Turn Six.

Grist remained under pressure for the entire 20-lap race from Costa, who ensured a fine weekend for Team Pelfrey after winning yesterday’s race and claiming the additional bonus point this morning for setting fastest race lap by a scant 0.0010 seconds over Grist. The Canadian’s second victory of the season with Andretti Autosport’s #27 DaVinci Foods/Lander Property Management entry moved him up one place in the season standings to fifth, just two points behind teammate Shelby Blackstock who was unfortunately involved in an incident even before the green flag had been waved.

Kaiser (Juncos Racing) held third in the early stages but soon began to struggle with a lack of rear-end adhesion and slid back toward the main pack. Scott Hargrove, meanwhile, was moving in the opposite direction for Cape Motorsports with Wayne Taylor Racing. After starting a lowly eighth, last year’s winner of the Cooper Tires USF2000 Championship Powered by Mazda made up three places on the opening lap, then scrabbled past series points leader Spencer Pigot (Juncos Racing) on Lap five.

Hargrove also overtook Kaiser on Lap 10, then set off in pursuit of the two leaders who already held an advantage of over three seconds. He reduced the deficit but was never quite able to get on terms with either Costa or Grist, and had to settle for third.

Mexican teenager Gutierrez finished a strong fourth after a race-long battle with Neil Alberico (Cape Motorsports) and Pigot, who had lost two additional places when Hargrove made his move. Gutierrez earned the RePlay XD Move of the Race for his pass on Kaiser for fourth in the Esses on Lap 11. Kaiser couldn’t match their pace and ultimately finished seventh, just ahead of Dalton Kellett (Team Pelfrey) and Kyle Connery (JDC MotorSports), who drove another strong race in working his way from 15th on the grid.

Alberico claimed the Quarter Master Hard Charger Award after making up six positions in the race to finish fifth. Additional contingency awards included the PFC Award and customized Race Energy charger – the official battery of the ladder series – to the winning team, Andretti Autosport; and the Staubli Award to Connery.

Garett Grist, #27 DaVinci Foods/Lander Property Management (Andretti Autosport): "Today was a really good race. We were able to get into second in corner one and hold the outside in corner two to get the lead. From there, we never looked back. The car was great. I never had to touch the bar or anything. I just set sail, and set consistent laps. At the end, I had to turn it up a bit because Nicolas [Costa] was catching up but I was able to do that relatively easily and from there we just pulled away even more at the end. It’s my second win this year and it feels good. Hopefully, we can get another at Milwaukee in two weeks."