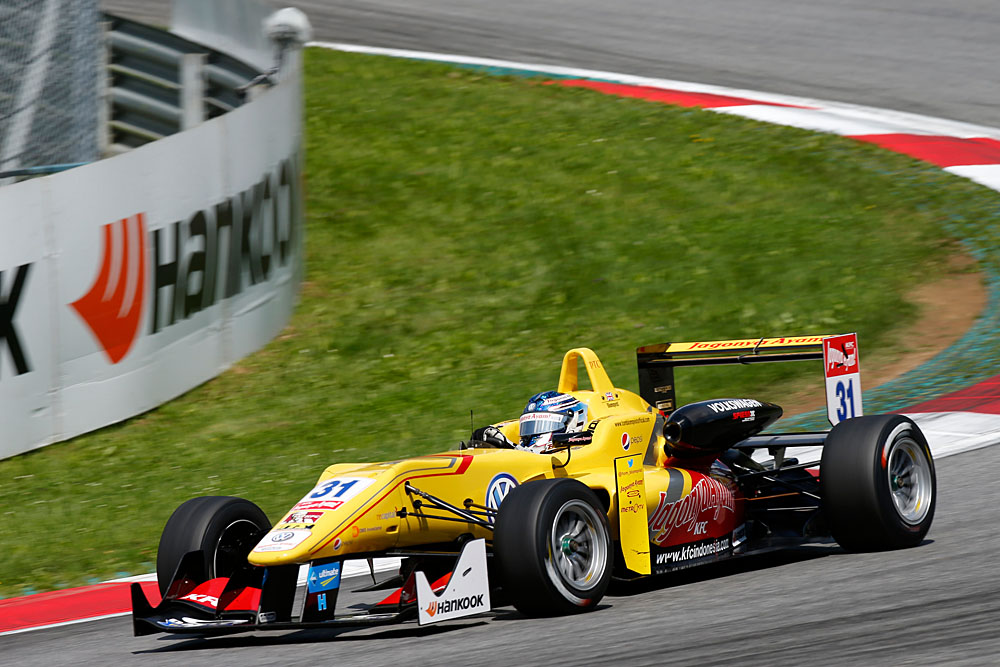 UPDATE For Max Verstappen (Van Amersfoort Racing), joy about his third place in the 22nd race of the FIA Formula 3 European Championship season at the Red Bull Ring only lasted briefly. The 16-year-old Dutchman was given a five seconds' time penalty because he had exceeded the track limits while overtaking Antonio Fuoco (Prema Powerteam) and thus got himself an unauthorized advantage. In the race classification, Verstappen drops back to fifth place. British driver Jake Dennis (Carlin) is now third, fourth place goes to Felix Rosenqvist (kfzteile24 Mucke Motorsport) from Sweden.

08/02/14 Tom Blomqvist (Jagonya Ayam with Carlin) is the winner of the 22nd season round of the FIA Formula 3 European Championship. At the 4.326 kilometers long Red Bull Ring, the Brit benefited from a collision involving the drivers who are currently first and second in the drivers' standings, Esteban Ocon (Prema Powerteam) and Max Verstappen (Van Amersfoort Racing) and took the lead after the first corner. Antonio Giovinazzi (Jagonya Ayam with Carlin) finished second from Max Verstappen (Van Amersfoort Racing), who came third. Ocon, who dropped back to last following the accident, still managed to make his way up to 13th place. The French Lotus Formula 1 junior remains in the lead of the FIA Formula 3 European Championship drivers' standings with a margin of 101 points.

The race started with a collision involving Esteban Ocon and Max Verstappen, the two drivers who are first and second in the drivers' standings. They tangled in the battle for the lead. Ocon had to rejoin the field at the back while Verstappen returned from the opening lap in sixth place. Tom Blomqvist inherited the lead from Antonio Giovinazzi and Felix Rosenqvist (kfzteile24 Mucke Motorsport).

In the following laps, Blomqvist and Giovinazzi, both racing for the Jagonya Ayam with Carlin team, pulled clear more and more from their first rival Rosenqvist, who, in turn, had Jake Dennis (Carlin) closely behind him. Max Verstappen closed up on the duo more and more, too. On lap twelve, Dennis mounted an attack on Rosenqvist; the Swede briefly came off the track and Verstappen went past the two and moved up into third place. While the 16-year-old Dutchman then immediately pulled clear from Rosenqvist and Dennis, Antonio Fuoco (Prema Powerteam), Gustavo Menezes (Van Amersfoort Racing) and Jordan King (Carlin) closed up to Rosenqvist and Dennis. On lap 17, Dennis overtook Rosenqvist for fourth.

Behind stalwart Rosenqvist, who was now fifth, there was a great battle during the last few laps. Eventually, the finish order in sixth to ninth place Fuoco, Menezes, van de Laar (Prema Powerteam) and King. Lucas Auer (kfzteile24 Mucke Motorsport), the only Austrian in the FIA Formula 3 European Championship field, finished tenth.

Out in front, Tom Blomqvist scored his fourth season win in the FIA Formula 3 European Championship. With this result, he moved up to third in the drivers' standings, toppling Lucas Auer. Blomqvist's team-mate Antonio Giovinazzi finished second, scoring his second podium finish of the season. Max Verstappen joined them on the podium in third as the best-placed rookie. After 24 laps, Jake Dennis was classified fourth as the second-best rookie.

Tom Blomqvist (Jagonya Ayam with Carlin): "I am happy and also slightly relieved because it has been a long time since I last was on the top step of the podium. As Esteban and Max collided in the first corner, I was able to move up into the lead. After a slight mistake, I had to be careful to keep Antonio at bay, but it all worked out fine."

Antonio Giovinazzi (Jagonya Ayam with Carlin): "On the last couple of weekends, we had some issues with the engine and the chassis, but now, things seem to be running fine again. Following the collision between Esteban and Max, I was second and I tried to attack Tom for first place. After ten laps or so, I still had a chance, but this attack on Tom was unsuccessful as well. Still, I am very happy with my second place."

Max Verstappen (Van Amersfoort Racing): "My start was good and I was alongside Esteban in the first corner. There, he didn't leave me enough room and I couldn't avoid the collision. The left front suspension of my car was damaged in the accident and I am happy that I have made it to the finish at all. Because of the damage, my tires were completely worn out at the end of the race."