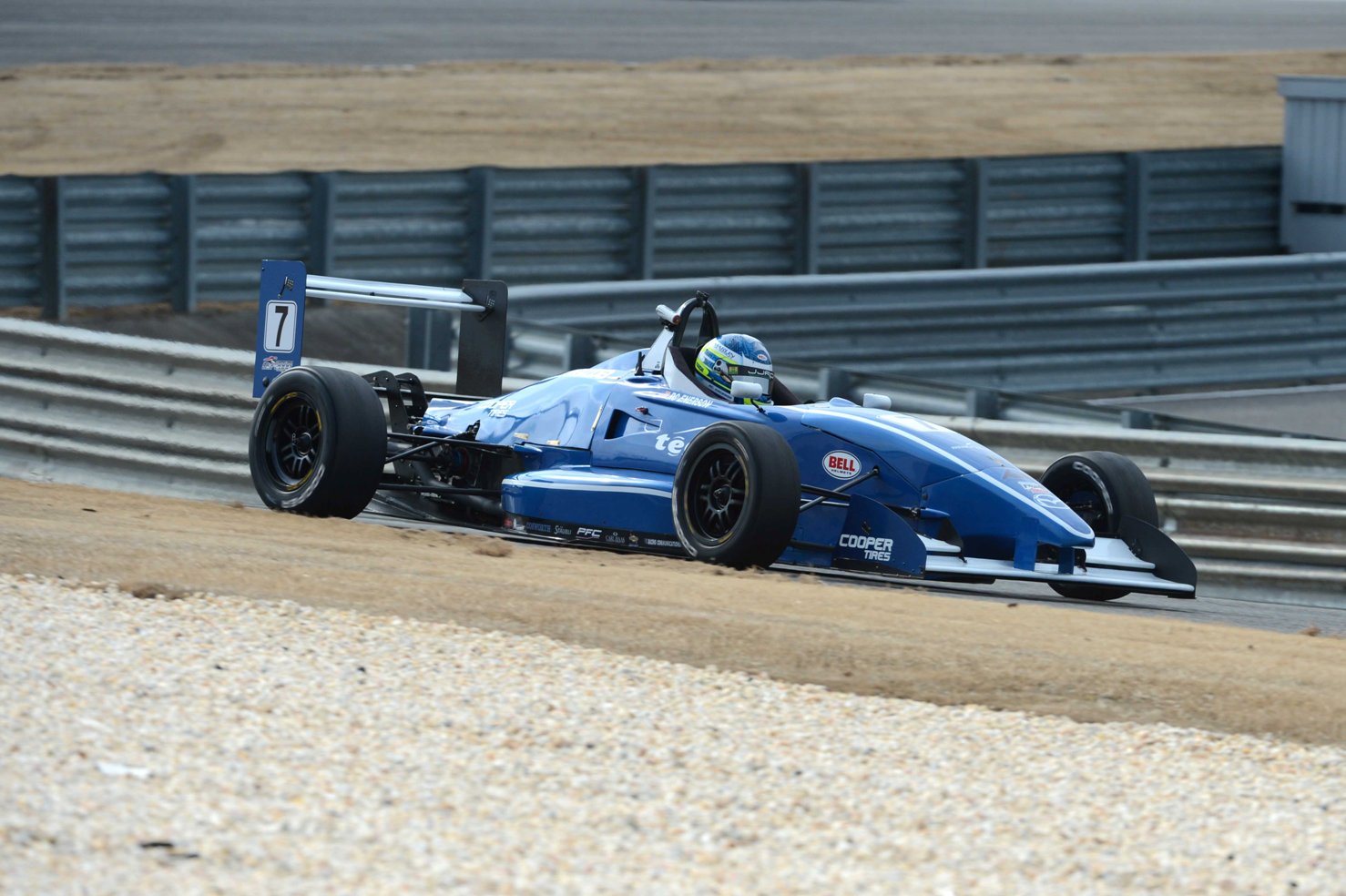 Lexington, Ohio – RC Enerson bounced back into contention for the Cooper Tires USF2000 Championship Powered by Mazda by scoring an accomplished victory in this afternoon’s Allied Building Products Grand Prix of Mid-Ohio Race One. Enerson, 17, from New Port Richey, Fla., had seemed in control of the title-chase after winning three of the first four races of the season, only for a series of disappointing results – capped by a mechanical problem in the most recent race in Toronto – to slip behind both charging Frenchman Florian Latorre and his Cape Motorsports with Wayne Taylor Racing teammate Jake Eidson.

Latorre earned his fifth pole in as many race weekends but it was Enerson who grasped the lead at the first corner and never looked back. Enerson refused to be distracted by a shower of rain which caused the leaders to cut their pace by up to 10 seconds per lap during the final three laps. He took the checkered flag 1.6223 seconds clear of Latorre to move within 18 points with four races remaining in the season.

An incident almost immediately after the start in Turn Four caused a lengthy caution period, but Enerson was already out in front by that stage, with Latorre having slipped to third behind a fast-starting Canadian Daniel Burkett (Belardi Auto Racing).

Latorre found a way past Burkett soon after the restart, but two blistering early laps by Enerson had already allowed him to pull out a margin of almost two seconds. Latorre gradually whittled away at the deficit, posting the fastest laps of the race and hauling himself onto the tail of the race leader with 13 of the race’s 18 laps completed. Then came the rain. It was light at first, then a little more intense, and some of the drivers found the tricky conditions more to their liking than others.

Enerson held firm at the front to secure the victory, while Latorre was fortunate to remain in second after sliding briefly off course on Lap 16. By then the battle for third was far in arrears. And what a battle it was with as many as 11 cars running nose to tail or side by side. Burkett held the place until just two laps from the end, when Peter Portante (ArmsUp Motorsports) finally found a way past to snag his first podium finish of the season.

Austin Cindric (Pabst Racing), who was born in nearby Columbus, Ohio, charged impressively from ninth to fifth, before falling foul of the slippery surface in Turn Four on Lap 17. In his wake, Jake Eidson (Cape Motorsports with Wayne Taylor Racing) vaulted from eighth to fourth in the final two laps, closely followed by Norwegian Henrik Furuseth (JAY Motorsports), Burkett, Aaron Telitz (ArmsUp Motorsports) and Victor Franzoni (Afterburner Autosport). Furuseth’s climb from 11th to fifth over the final two laps of the race earned him the Tilton Hard Charger Award and the RePlay XD Move of the race.

Additional contingency awards included the PFC Award and customized Race Energy charger – the official battery of the ladder series – which went to the winning team of Team E Racing., and the Staubli Award was presented to Portante.

Round 11 of the Cooper Tires USF2000 Championship Powered by Mazda will take place tomorrow (Saturday, August 2) at 1:05 p.m. EDT, followed by the third leg of the Allied Building Products Grand Prix of Mid-Ohio Sports Car Course at 9:05 a.m. on Sunday, August 3.

RC Enerson, #7 Peninsula Pipeline/Patriot Bank/Tampa Bay Rays/Bell Helmets/Sparco (Team E Racing): “The race was really good for us. We knew we had to get a good start to be here because it can be a little difficult to pass here. I took the lead on the start and held and then the rain came so that made for difficult conditions. Running a rain line with slick tires was awkward but I was able to hold it out to the end. These are more points toward the championship and hopefully we will continue to catch up there."