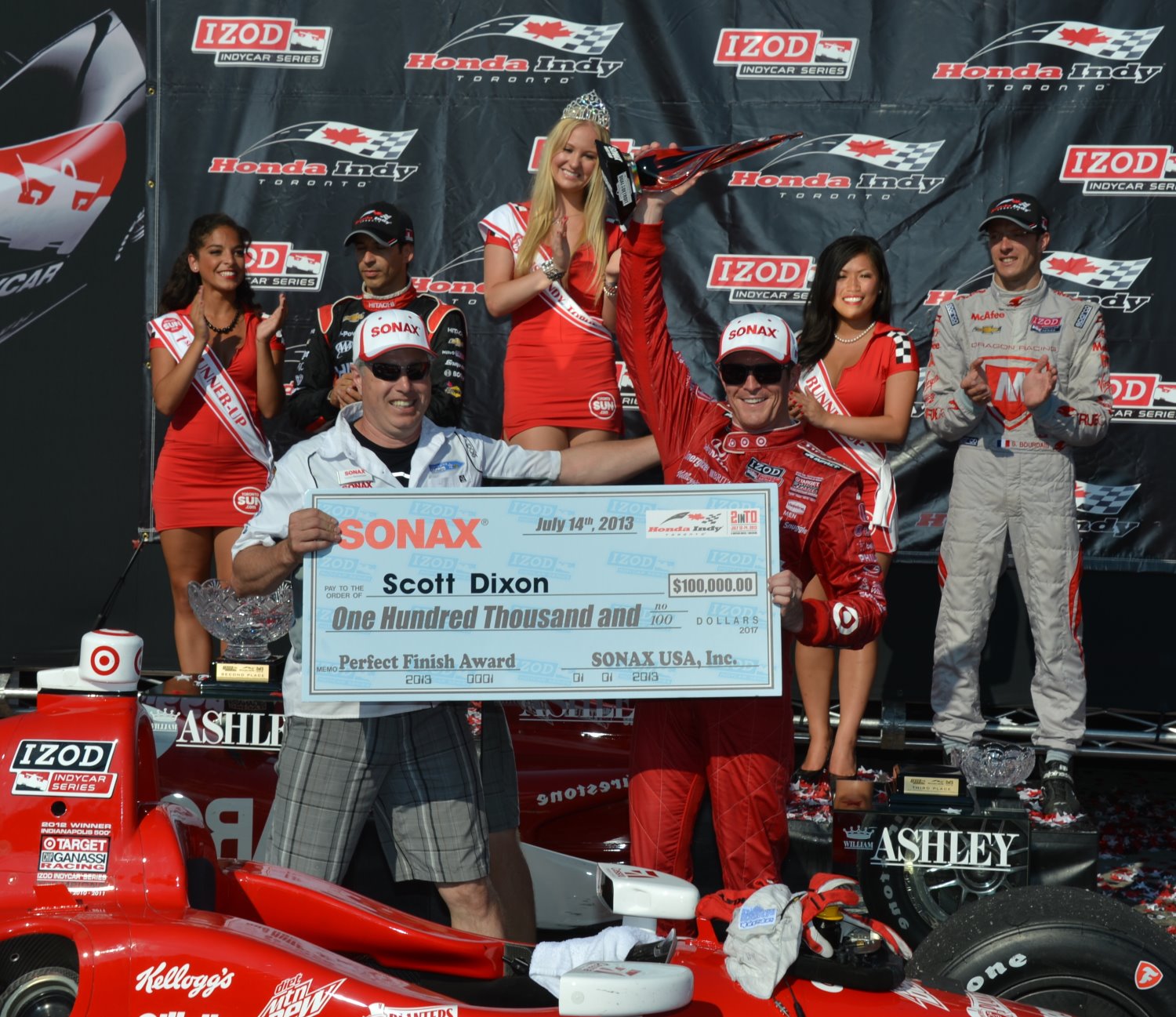 The Target Chip Ganassi Racing driver swept the "2 in T.O." 85-lap races, following a victory six days earlier at Pocono Raceway to springboard himself to the 2013 Verizon IndyCar Series championship.

"The big thing for us was we had just come off an unexpected win at Pocono and the team was pumped, and we had a big test in Sebring to develop the engine a little bit for more drivability and straight-up power and fuel mileage," said Dixon, whose initial race on the streets of Exhibition Place was in 1999 in Indy Lights with Johansson Motorsports. "We weren't quick in every session but we had one pole and two race wins.

"When you win the first one of a doubleheader you're obviously looking for big things for race two. To have it go the right way twice within a two-day spread with the competition you have is almost impossible."

Dixon nearly repeated the feat in October at Houston, winning the front end of the doubleheader and finishing as the runner-up to Team Penske's Will Power in the second race on the temporary street course. The results, coupled with mechanical issues that afflicted Helio Castroneves' car in both races, handed Dixon a 25-point lead heading into the season finale at Auto Club Speedway.

Capitalizing on the three-race winning streak in July, though, swung open the door to Dixon's third series title.

He entered the race on the 2.5-mile Pocono Raceway tri-oval 92 points behind Castroneves and moved from seventh to fourth (65 points behind) in the standings following the Chip Ganassi Racing podium sweep.

At Toronto, teammate Dario Franchitti earned the Verizon P1 Award for Race 1 with Dixon starting fifth for the 85-lap race on the 1.75-mile, 11-turn street course. He overtook race leader Sebastien Bourdais, who started second, on Lap 78 and then held off the four-time CART champion on a Lap 84 single-file restart to win by 1.7 seconds. Dixon was dominant in starting from the pole in Race 2. He led 81 of the 85 laps and finished ahead of Castroneves and third-place Bourdais.

Base and bonus points totaling 105 for the weekend, compared to Castroneves' 69 points, drew Dixon to within 29 points of the championship front-runner heading to Mid-Ohio Sports Car Course, where he had won the previous two years.

"The first race really played out in our favor; the car was really strong and we seemed to just hold onto the tires a lot better than some of the others," Dixon recounted. "We passed Bourdais and Dario throughout the race and had that late restart when Bourdais got the lead and I had to pass him back. (In Race 2) it had been a long time since I had such a dominant day.

"To win three-races in a seven-day period was pretty crazy to put us one back in the championship. It did start the first of two or three vaults to the championship. We had Sonoma and Baltimore where we sort of fell out of it before we got to Houston, where thankfully Penske had a rough weekend and we were able to get a 1-2 finish there."

A Target Chip Ganassi Racing driver has won at Toronto three of the past five years — twice by Franchitti, who also won the 1999 CART-sanctioned race when Dixon finished 18th in the Indy Lights race. Another sweep likely won't have the same impact on the standings as last July, but would draw Dixon into the top five.

"Toronto is a place I've always loved but never got a pole and never got a win," said Dixon, who is eighth (140 points behind the front-running Castroneves) in the championship through 12 of 18 rounds. "I had opportunities in the past but was never able to take advantage. To do that on one weekend was huge."

2. Firestone to mark milestone win at Toronto: Firestone will celebrate its 250th victory since returning to IndyCar competition 20 years ago after Sunday's Honda Indy Toronto Race 2.

Firestone returned to open-wheel racing on March 5, 1995 at the Grand Prix of Miami. Eleven races later, Scott Pruett drove his Firestone-equipped car to Victory Circle at the Michigan 500, becoming the tire manufacturer's first winner since its return.

3. Bourdais confident heading back to Canada: KVSH Racing driver Sebastien Bourdais won the Indy car race on the streets of Exhibition Place in 2004 and has five other top-five finishes in his nine races, including second and third last July.

"This is a very important race for the KVSH Racing team because our sponsor Hydroxycut, has its headquarters just outside of Toronto in Oakville, so we are expecting a lot of support at the track," he said. "Over the years, I have had some very exciting races in Toronto and had some good results. It is always a great event. The Hydroxycut KVSH Racing car has been fast on most of the street circuits this year and with two races this weekend hopefully we can have a couple of good results."