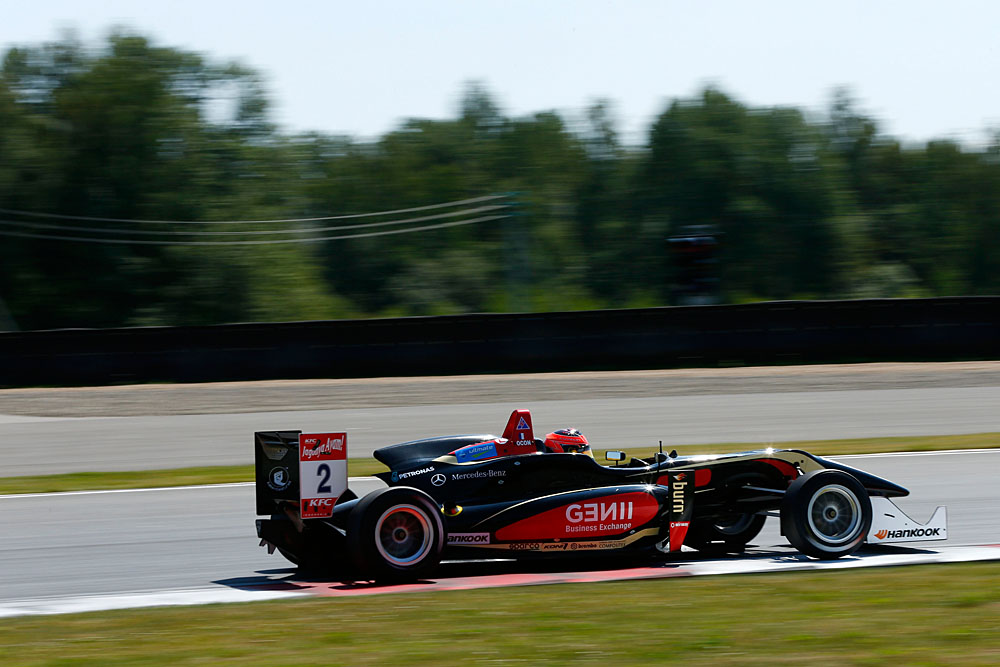 In the second FIA Formula 3 European Championship race, Esteban Ocon (Prema Powerteam) continued to improve his track record in Russia. Following three pole positions and victory in the first race of the weekend, the Lotus Formula 1 junior driver also won the second race near the Russian capital. For the entire race, Antonio Fuoco withstood the pressure by his direct rival on track, Tom Blomqvist (Jagonya Ayam with Carlin) and managed to bring second place home. With his seventh victory of the season, race winner Ocon managed to extend his lead in the drivers’ standings; he now has a 109 points’ lead from Max Verstappen (Van Amersfoort Racing). The 16-year-old Dutchman retired due to technical problems.

Esteban Ocon already used the opening stages of the race to pull clear from his rival Antonio Fuoco. After only three laps, the Frenchman was leading by more than two seconds and gradually extended his margin. In a similar way, Fuoco was also able to pull a gap from Tom Blomqvist, who was ahead of Max Verstappen, Lucas Auer (kfzteile24 MÃ¼cke Motorsport) and Jordan King (Carlin). After a few laps, Blomqvist closed up to Fuoco again and reduced the gap. Meanwhile, Max Verstappen visibly slowed down on lap eleven and had to retire in the pits at the end of lap twelve due to technical problems.

Halfway through the race, Esteban Ocon was almost four seconds clear of his team-mate Antonio Fuoco, who still wasn’t able to pull away from Blomqvist. However, the Brit didn’t mount a serious challenge to Fuoco’s second place before the checkered flag came out. Thus, behind dominant race winner Ocon, Fuoco came home ahead of Blomqvist. Fuoco scored his sixth podium finish of the year, Blomqvist took part in the prize-giving ceremony for the fifth time this season.