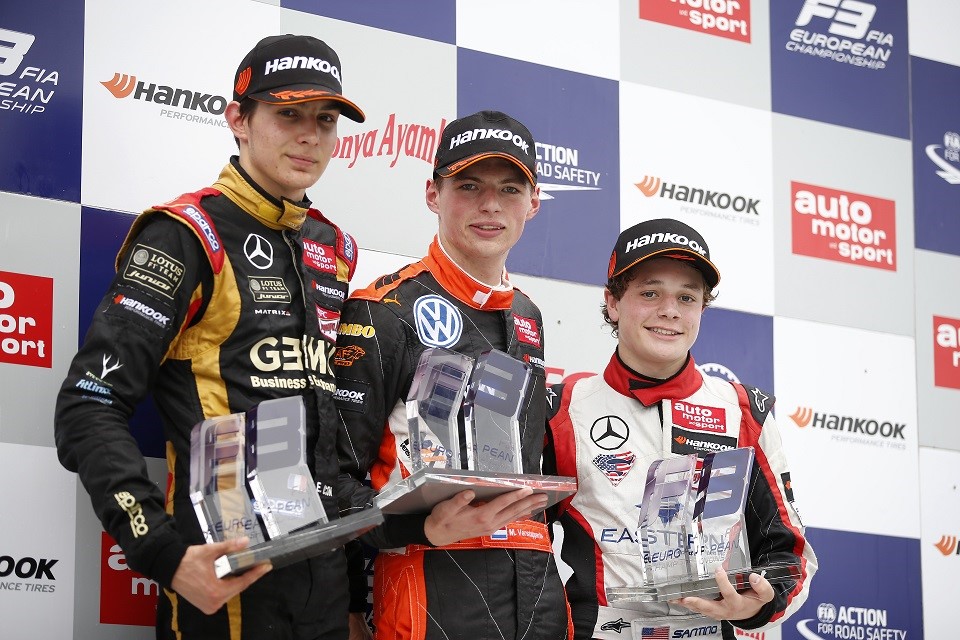 Max Verstappen (Van Amersfoort Racing) is the first driver to score two consecutive triple victories in the FIA Formula 3 European Championship. Following his clean sweep at Spa-Francorchamps, the 16-year-old Dutchman also won all three races at the 2.3 kilometers long Norisring in Nuremberg. Esteban Ocon (Prema Powerteam) in second place and third-placed Jordan King (Carlin) accompanied him on the podium. In the drivers’ standings, the son of ex-Formula 1 driver Jos Verstappen reduced his gap to points’ leader Esteban Ocon to 74 points.

At the restart on lap seven, Max Verstappen managed to hold on to his lead from Ocon and King. While the first three positions remained unchanged until the end, Santino Ferrucci (Eurointernational), Sean Gelael (Jagonya Ayam with Carlin) and Gustavo Menezes (Van Amersfoort Racing) battled for fourth place. Eventually, American youngster Ferrucci had the upper hand and scored his best result to date with fourth place on his second weekend in the FIA Formula 3 European Championship. Menezes and Gelael took the checkered flag in fifth and sixth place respectively. For Indonesian Gelael, this was also his best result of the season so far.

Max Verstappen (Van Amersfoort Racing): “Basically, the race was similar to the dry part of the second race. I had a good start and I was able to pull a gap quite quickly. Eventually, the only thing I still had to do was to stay out of the barriers and the walls and to bring first place home safely."

Esteban Ocon (Prema Powerteam): “My start was good. When we drove through the Grundig hairpin for the first time, I had to open the steering to avoid a collision with Jake Dennis. He hit Tom Blomqvist and I was second after the corner. Today, Max was a little bit too quick, so I tried to control the gap to third-placed Jordan King and get the maximum score that was possible for me today by finishing second."

Jordan King (Carlin): “It is great to be back again where I was at the start of the season: on the podium. Almost, I was even able to take second place, but third place is good, too, particularly so as I am satisfied with my lap times."