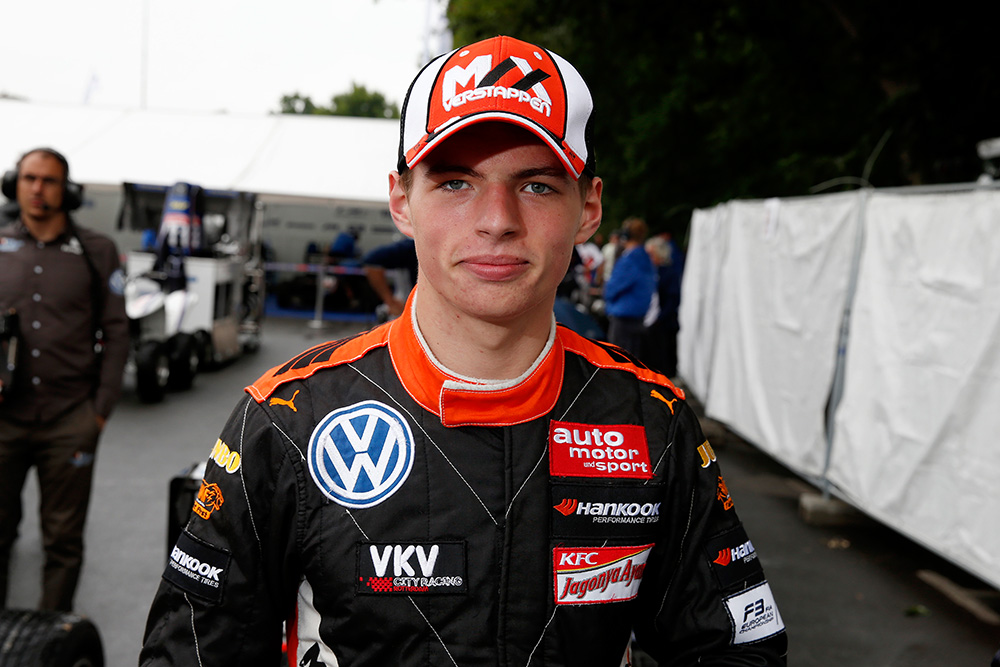 Max Verstappen (Van Amersfoort Racing) also prevailed in the rain at Norisring and claimed his fifth consecutive win in the FIA Formula 3 European Championship. The race started at a drying track, but rain set in again during the race. At the 2.3 kilometers long track in the centre of Nuremberg, the son of ex-Formula 1 driver Jos Verstappen did everything right and won from Jordan King (Carlin) and Lucas Auer (kfzteile24 MÃ¼cke Motorsport). Esteban Ocon (Prema Powerteam) had to make do with 14th place following a drive-through penalty for causing a collision with Tom Blomqvist (Jagonya Ayam with Carlin), but still remains in the lead of the FIA Formula 3 European Championship drivers’ standings.

Max Verstappen took the lead at the start, followed by Tom Blomqvist and Esteban Ocon. On the opening lap already, the first collision occurred in the midfield: Richard Goddard (ThreeBond with T-Sport) and Felipe GuimarÃ£es (Double R Racing) retired. Jules Szymkowiak (Van Amersfoort Racing) had to turn into the pits, just like Alexander Toril (ThreeBond with T-Sport) and Michele Beretta (Eurointernational). Only Toril and Beretta were able to continue. A safety-car intervention followed.

At the restart, Verstappen held on to his lead while Felix Rosenqvist (kfzteile24 MÃ¼cke Motorsport) and Jordan King overtook Santino Ferrucci (Eurointernational), demoting the young American to seventh. On lap 17, Roy Nissany (kfzteile24 MÃ¼cke Motorsport) hit the rear of the car of the only lady racer in the field, Tatiana Calderon (Jo Zeller Racing), after which the safety car came out once more. Max Verstappen was still in the lead ahead of Tom Blomqvist and Esteban Ocon. Heavy rain then caused an interruption of the race.

Verstappen also had the best restart behind the safety car on a wet track a few minutes later and stayed in first place. Soon after that, Ocon and Blomqvist tangled, the Brit retired and the Frenchman was given a drive-through penalty. King inherited second place, Lucas Auer moved up to third as a brief safety car neutralized the race once more. With King ahead of Auer, the two crossed the finish line behind race winner Verstappen after 32 laps. Jake Dennis (Carlin) finished fourth in his second race at Norisring from 16-year-old Santino Ferrucci, who already scored his first points on his second weekend in the FIA Formula 3 European Championship. Felix Rosenqvist (kfzteile24 MÃ¼cke Motorsport), Antonio Fuoco (Prema Powerteam), Nicholas Latifi (Prema Powerteam), Antonio Giovinazzi (Jagonya Ayam with Carlin) and Gustavo Menezes (Van Amersfoort Racing) rounded out the top ten.

Max Verstappen (Van Amersfoort Racing): “Today, conditions were anything but easy. Ma start was good and my pace in the rain wasn’t too bad either. Then, it almost went even better in the rain, but it was similar to what we had in second qualifying yesterday. We had a good balance right away and that was the case in the race, too."

Jordan King (Carlin): “Being on the podium after such a long time is great. My start into the race was good and I was able to move up to fourth until the red flag came out. After the restart on a wet track, I also managed to overtake Tom Blomqvist and Esteban Ocon and I was second. Then my engineer told me on the radio that Ocon had been given a drive-through penalty, I took it quite easily on the final couple of laps. Max was already too far away and from that time on, my second place was relatively safe."

Lucas Auer (kfzteile24 MÃ¼cke Motorsport): “The race wasn’t easy. I was fourth right after the start, but then I lost my position again after a mistake. On a wet track, I could move up again and now I am happy with my third place. In the wet, I tried everything to score another podium finish and I succeeded."