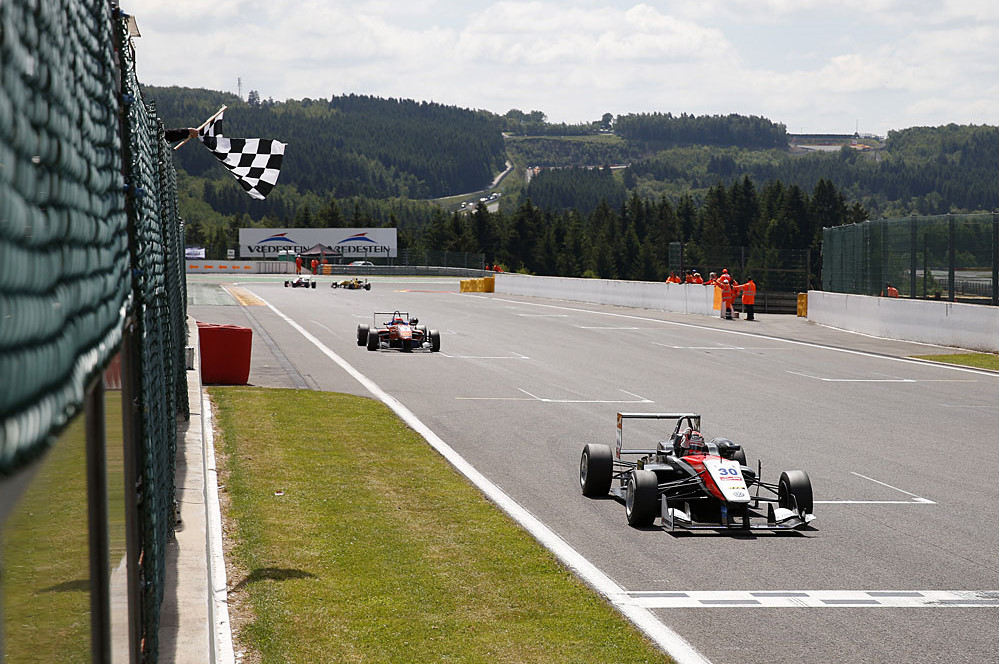 Max Verstappen already moved up into the lead at an early stage and didn’t lose his position after a safety car intervention. The safety car was deployed on lap six after 16-year-old Santino Ferrucci (Eurointernational), who is making his series debut this weekend, and Italian Antinio Giovinazzi (Jagonya Ayam with Carlin) had collided and retired. Verstappen’s victory was only briefly in jeopardy on the final lap when Lucas Auer started an attack. Verstappen turned this off successfully and took the checkered flag ahead of his opponent from Austria.

British rookie driver Jake Dennis crossed the finish line in third place. The Carlin driver overtook Felix Rosenqvist (kfzteile24 Mucke Motorsport) for third on the final lap and got to climb on the podium for the prize-giving ceremony as a reward. The Swede dropped back as far as seventh due to a broken fuel pump. Tom Blomqvist (Jagonya Ayam with Carlin) claimed fourth place from Antonio Fuoco and Gustavo Menezes (Van Amersfoort Racing), who scored his best result of the season in sixth place. Felipe Guimaraes (Double R Racing) was classified eighth behind Rosenqvist and also scored his best result in the FIA Formula 3 European Championship to date. Jules Szymkowiak (Van Amersfoort Racing) and Jordan King (Carlin) rounded out the top ten after an action-packed race.

Max Verstappen (Van Amersfoort Racing): "My start was okay and I was third into Eau Rouge. On the long straights, I then had such a good slipstream that I was able to go into the lead. Until the safety car, everything went fine, but my car started to oversteer in the closing stages. The two final laps were really tough, but eventually, I managed to bring first place home and I am really happy."

Lucas Auer (kfzteile24 Mucke Motorsport): "My start wasn’t particularly good, but at least I had a good slipstream after that. In the next laps, I was able to follow Max, but I couldn’t attack him. That changed only on the final lap: I made a move on him, but it wasn’t enough. Nevertheless, it was a nice battle for victory with Max."

Jake Dennis (Carlin): "Moving up from eighth on the grid to finish third doesn’t happen every day. At Spa, however, this is possible. My start was already good, but I also benefited from the collision between Esteban Ocon and Antonio Fuoco. Thus, I was fourth after one lap already. After that, I was able to pull away from the driver in fifth place until the safety car came out. Eventually, Felix Rosenqvist had problems. I took the opportunity and took over his third place. Third place is a good result."