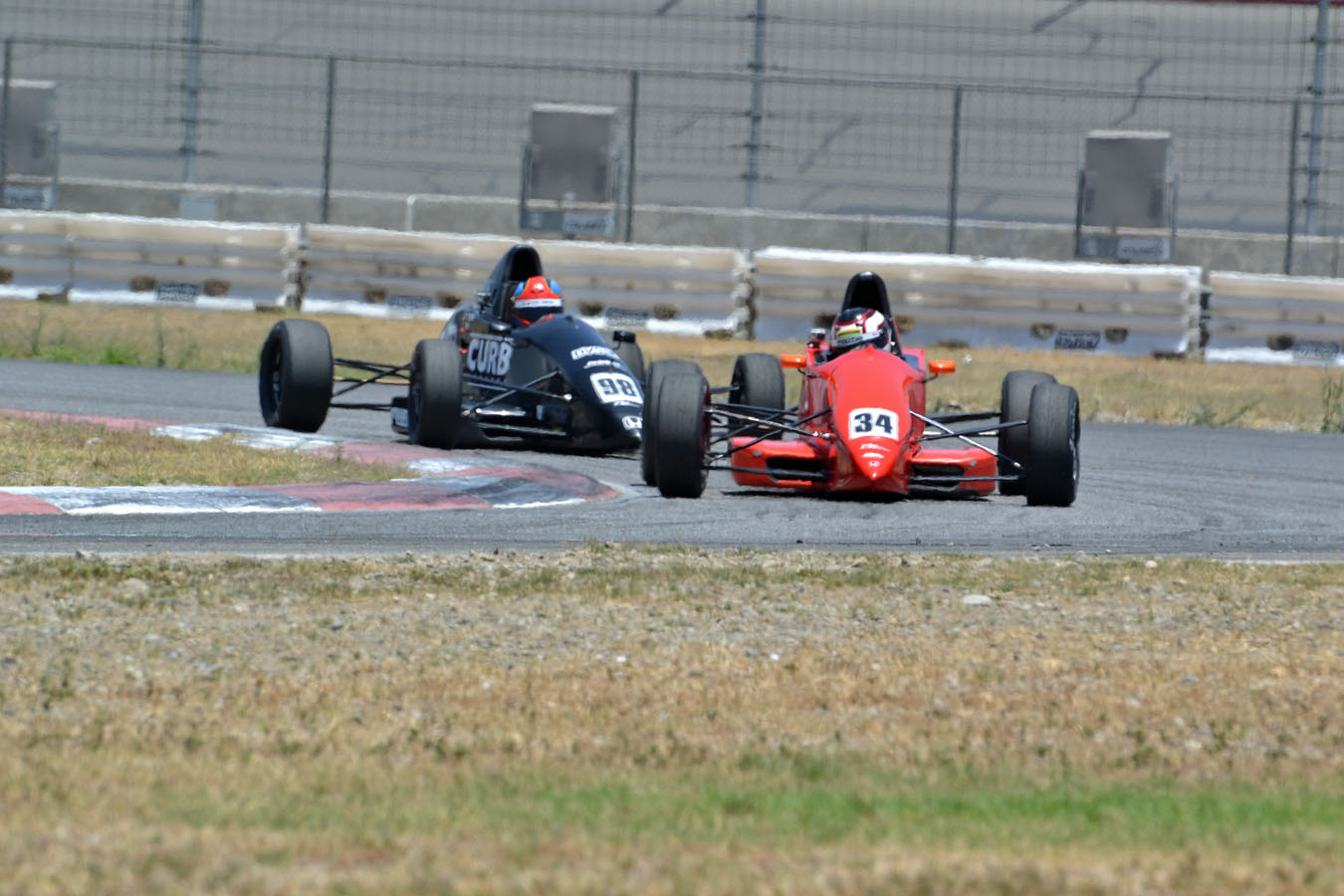 The Pacific Formula F1600/F2000 Championship began its second triple race weekend much the way it ended the previous event with Joey Bickers and Colton Herta staging another epic nose-to-tail battle ending with Herta taking the victory while Ira Fierberg cruised to his fourth consecutive victory at the 2.880 mile infield road course at Auto Club Speedway in Fontana on Saturday afternoon.

Leading the Formula F2000 group as he has for the past two races at Fontana was Ira Fierberg in his #27, Pinnacle Performance, Sparco USA, DFR, Van Diemen threatening to break the 1minute 40second barrier with a lap of 1m 40.021s to claim his third consecutive pole position. Lining up next to Fierberg on the front row will be Les Phillips in his #2, Swiss Implants, Porterfield Brakes, Van Diemen. This pair will be followed by Bob Negron, #9,Terri Negron Web Design, fengshuimebaby.com, Van Diemen, Peter West, #99, Frank Monise Motors, Zombo.com, Kodenko Jeans, T.J. Martell Foundation Van Diemen, Jim Stewart, #38, True Ventures, Van Diemen and Harindra DeSilva, #6, DFR Van Diemen making his return to the series. Unfortunately Tom Hope in his #18, H&M Racing, Dart, Carbir had a gearbox problem causing him to be unable to participate in qualifying.

Under now clear and sunny skies and temperatures in the mid seventies the field rolled off the grid for the pace lap and when they took the green Ira Fierberg took command with a well executed start and led the Formula F2000 group as they headed off the oval into the infield section on the first lap. Fierberg continued to lead as the field completed the first lap. He was followed by Phillips, West, Negron, Hope, up two places from last on the grid, DeSilva and Stewart.

On lap two West dropped two positions having been passed by both Negron and Hope. Hope passed Negron for third on lap four and began his pursuit of Phillips who was still holding second place. Hope managed to ease his way by Phillips on lap 7 and held second for three more laps until Phillips re-passed Hope to claim second, a position he would hold to the checkered flag. Phillips would also claim the races fastest lap honors.

Fierberg maintained enough of a gas as to not be seriously pressured throughout the race and cruised home to victory, his fourth in a row at Fontana dating back to the 2011 season, and with it the Master Class win.

Negron while holding fourth place came to a halt in turn five with an electrical problem that left this car with no power and dropped out leaving West to finish fourth followed by DeSilva with a steady race to fifth and Stewart finishing sixth.

Joey Bickers was swamped as the Formula F1600 field swept around the banking for the first time but managed to gain the lead as the cars headed into the infield section of the track on the first lap. As the field swept back onto the banking to complete the initial lap it was Bickers in the lead ahead of Herta as these two eased away from the pack they were followed by Keyes, Evans, Miserendino, Kirby and Steele.

The PR1 Motorsports duo of Bickers and Herta cruised around in tandem with Herta just off his rivals’ gearbox as they circulated lap after lap. Herta managed to lead lap five but by the next time around Bickers was back in front with Herta seemingly content to remain behind. It was not until exiting turn eighteen on the final lap that Herta made his move, pulling out of the draft at precisely the right moment to nip his teammate at the finish line by 0.017 of a second to claim his fourth win in the series and leaving Bickers with thoughts of what might have been. Herta also managed to capture the fastest lap honors as he extended his points lead.

Bickers claimed, “It was very nerve racking on the final lap because I knew he was going to try to pass, but I didn’t know where. I thought he would try under the bridge into turn twelve and when he didn’t I was surprised. He was definitely faster in some spots. My car hit the rev limiter as we headed toward the checker and stuttered just a bit". Which may have been all Herta needed.

The Lynx Racing pair of Alex Keyes and Andrew Evans had a spirited battle for the final step on the podium. They exchanged positions several time throughout with Keyes finally settling the dispute claiming third place with a pass on the twelfth of the fourteen laps while Evens ended up fourth.

Behind the Lynx Racing duo was Alex Kirby changing positions with Mike Miserendino, who is getting more comfortable in the open wheel cars after having won four consecutive Spec Racer Ford National Championships. They swapped placed on several occasions and in the end it was Kirby who maintained the advantage and finished fifth with Miserendino sixth.

Zurlinden was nudged into a spin on lap two dropping to the end of the field but managed to work his way bay into seventh at the finish with Steele, in his first race finishing eighth.

Round seven will take the green flag at 8:00am Sunday morning with round eight to follow at 10:55 am.

The single-seat, open-wheel F2000 cars are powered by 2-liter Ford Zetec engines and run on Hankook tires supplied by Sierra Tire. The F1600 cars will be powered by either the 1500cc Honda Fit engine or the 1600cc Ford ‘Kent’ engine and will run on Hoosier tires.