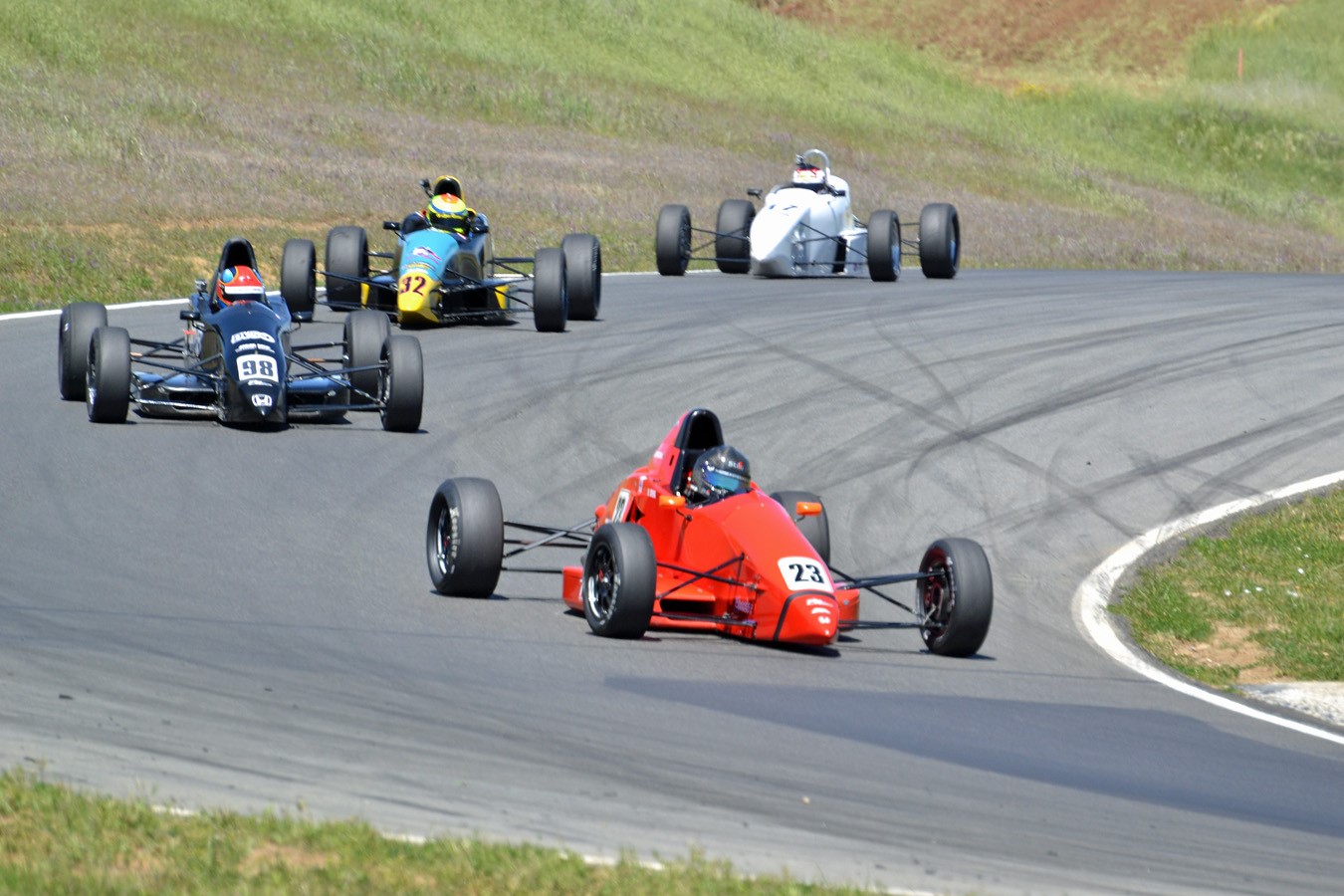 David Cheng seized victory in the Formula F1600 group while Bob Negron completed a sweep of the honors on Sunday at round 2 of the Pacific F2000/F1600 Championship at Thunderhill Raceway Park in Willows California. Cheng a former winner in Formula F2000 was making his first start this weekend in Formula F1600 driving for PR1 Motorsports. The scenic 3.0 mile, 15 turn course was kind to Negron enabling him to again take maximum points with a pole, victory and fastest race lap.

Sunday morning qualifying had near perfect conditions, clear and sunny with temperatures in high sixties and a slight breeze. The Formula F1600 group was highly competitive with the top four drivers finishing within one second of each other and many having improved their times over Saturday. PR1 Motorsports again prevailed but this time it was David Cheng, #23, PR1 Motorsports, Iskin, Mygale/ Honda leading the way with a 1m50.634s, having accomplished that time on his final lap. Lynx Racing’s Alex Keyes, #32, Lynx Racing, Spectrum/Honda with a time just 0.483s behind Cheng.

David Cheng took full advantage of his pole position at the green flag and led the formula F1600 group from the start with Colton Herta filling his mirrors and Alex Keyes and Joey Bickers in tow, a small gap then Andrew Evans and Les Phillips. Dave Zurlinden discovered a vibration that turned out to be a loose wheel and retired after the pace lap.

Cheng was unable to pull out any lead as Herta dogged him and for lap after lap the two circulated mere inches apart. Behind the leading pair the duel for third place was just as hotly contested as Bickers closed on Keyes threatening to seize the position and finally succeeding on lap 6. The next time by Keyes had the Spectrum back in front of Bickers’ Piper. These positions switched twice more and Keyes finally was able to maintain his advantage to the end for third place while Bickers was fourth, just off the podium but did manage the fastest race lap.

At the front things were far from comfortable for Cheng as he still had Herta to contend with as the two Mygales continued in tandem. Herta managed to pass Cheng on lap 10, but Cheng returned the favor on the following lap and was able to hold off his young teammate to the end to claim his first Formula F1600 victory, never putting a wheel wrong until he ran wide at turn 9 on the cool down lap.

Cheng (22) commented, “These young kids are fast, it took everything I had to stay ahead."

Tom Hope got the jump on Bob Negron to take the lead of the Formula F2000 group at the start and led Negron, Peter West, Pierre De Martines and Jim Stewart at the end of the first lap.

Negron was back by Hope the next time around and the two were set for repeat of their race on Saturday, however it only lasted six laps as Hope’s Carbir broke a rocker in the rear suspension and was forced to retire. By this time Negron had built a substantial lead and was able to claim victory virtually uncontested though he did manage the race’s fastest lap.

Behind the Negron/Hope contest, Pierre DeMartines and Peter West were having a struggle of their own which sadly only lasted three laps when West’s Van Diemen suffered a broken rear axle and he was forced to retire on lap 4 which left Pierre in a lonely second place as he had worked his way clear of Jim Stewart behind in third.

The next event for the Pacific Formula F2000/F1600 Series will be held on May 18th and 19th at Buttonwillow Raceway Park and will be a triple race weekend.

The single-seat, open-wheel F2000 cars are powered by 2-liter Ford Zetec engines and run on Hankook tires supplied by Sierra Tire. The F1600 cars will be powered by either the 1500cc Honda Fit engine or the 1600cc Ford ‘Kent’ engine and will run on Hoosier tires.