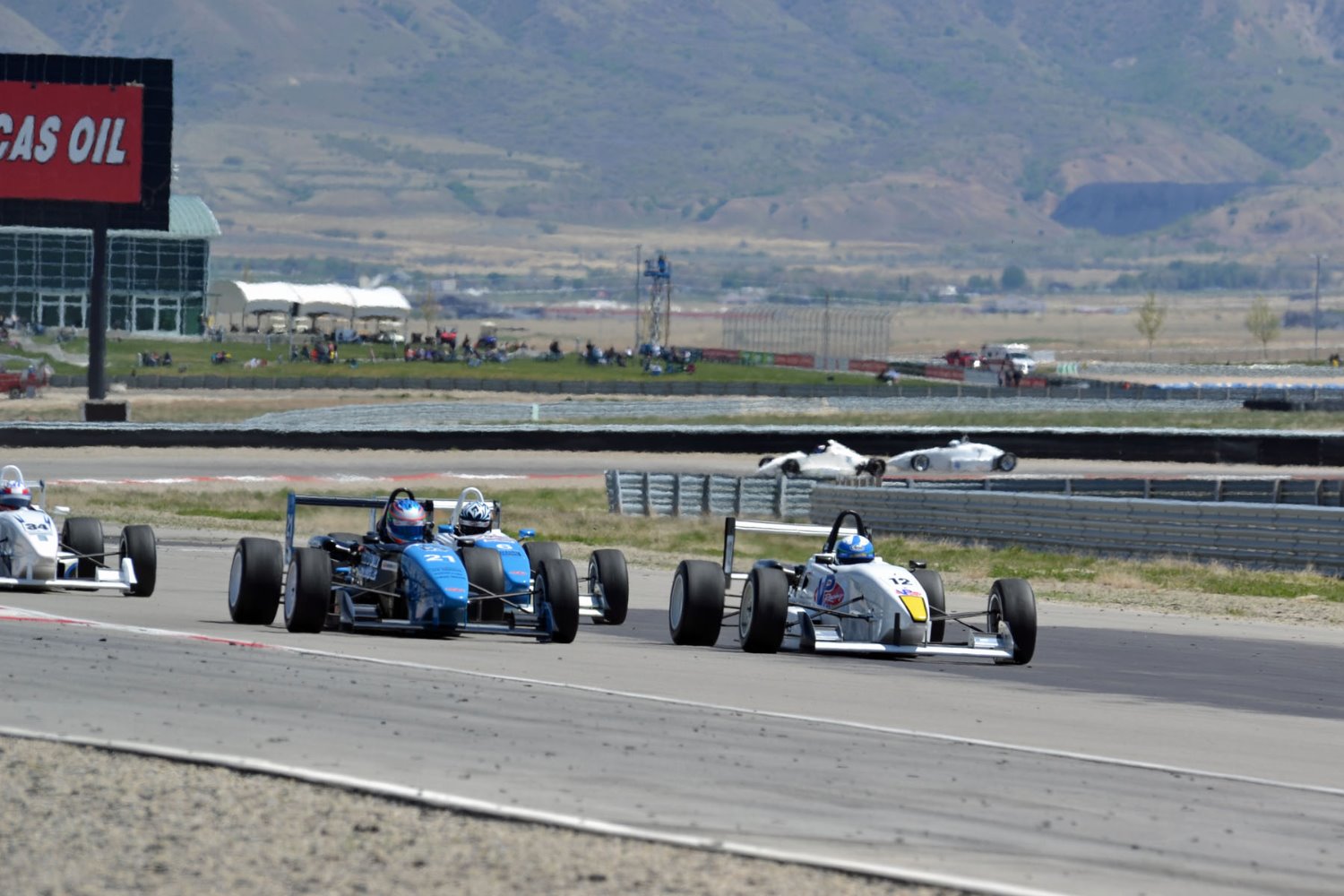 Tooele, Utah – Under clear skies and cool temperatures, surrounded by snow capped mountains the Pacific F2000/Formula F Super Series Championship Presented by Corsa Car Care held round 3 on the 2.2 mile West Track at Miller Motorsports Park in Tooele, Utah. The event was run as Part of the Utah Grand Prix weekend where it joins the NASCAR K&N Pro Series West.

Qualifying was held on Friday morning due to the number of on-track events being held and was led by Ian Lacy, a Tooele resident on his home track driving the #12 VP Fuel Van Diemen. Lacy last raced in the series in 2005 and on his return posted a time of 1:24.859, over half a second ahead of series point leader Bobby Kelley in his #21, A & B Equipment, Dave Freitas Racing Van Diemen who clocked in at 1:25.514 to join him on the front row of the grid.

The second row was made up of Camden Geise in the #6, DFR Van Diemen and Camren Kaminsky in the first of the PR1 Motorsports entries the #34 Van Diemen. These two were followed by Peter Thomas, #7 Refrigeration Control Co., PR1 Van Diemen, Peter West, #99, Frank Monise Motors Van Diemen, Les Phillips, #2 Swiss Implants Van Diemen and Rick Lee #166, Thomas Petroleum Van Diemen in his first appearance in the series.

The Formula F group was led by Conner Ford in the #77 JF Excavating & Grading, Western Nevada Supply, Sparco USA, PR1 Motorsports, Mygale/Honda for PR1 Motorsports ahead of Tommy Boileau driving the #7 Honda Performance Development Piper/Honda in his first outing in the Piper.

The green flag waved Saturday for the 1:45pm start and the field headed toward Sunset Bend on the first race lap with Lacy holding a slight advantage over Kelley. This pair was trailed by Kaminsky, Geise, Thomas, West, Phillips & Lee with a slight gap to the FF group led by Ford.

The order remained the same until lap three when Peter Thomas carried too much speed into the Right Hook-Knock Out double right hand turn, got on the brakes and spun the car dropping to the rear of the field at the same time as Les Phillips managed to pick up a position by passing Peter West at the Black Rock Hairpin.

Three laps later, on lap six, Camden Geise used an over/under move to take third place from Camren Kaminsky at the triple apex Demon/Devil/Diablo complex and then proceeded to pull out a comfortable gap he was to maintain to the end.

The order remained consistent to the finish and there were several passing attempts made without success as Peter West on three consecutive laps pressed Phillips at Sunset Bend pulling out but not quite able to overtake. West tried a move later at the Precision turn when the car pushed out and he went off and rejoined the track without losing a position.

As the race neared its conclusion, the gap between Lacy in first and Kelley in second which had remained constant throughout much of the race, began to shrink noticeably and it looked as though Kelley would have an opportunity to seize the position; but then the gap steadied at about a second and a half and remained that way to the finish with Lacy coming home 1.426 seconds ahead of the Riverside, CA resident. Lacy’s victory was also good for taking the Expert Class (drivers 35-50) honors.

Geise held his third place to the end to take the final step on the podium and with teammate Kelley finishing second, gave Dave Freitas Racing two drivers on the podium for the third consecutive race.
Fourth place went to Camren Kaminsky, who was followed by Les Phillips, Peter West, Peter Thomas and Rick Lee.

Phillips’ fifth place finish earned him the Hard Charger award in addition to taking the Master Class (drivers 51 and over) win.

The Formula F group was led by Conner Ford who managed a flag to flag win in the Mygale/Honda for his second win in the series and was followed to the flag by Tommy Boileau for his first finish in the series.