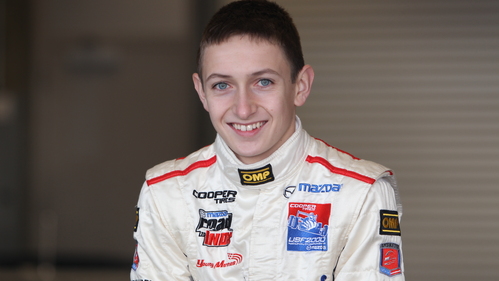 Though this will be his first full season in the series, Veach is no stranger to the Star Mazda Championship car. Veach recently drove to victory in the first two rounds of the Formula Car Challenge presented by Goodyear Winter Series, held at Infineon Raceway in Sonoma, Calif. in November. He earned two pole positions and led every lap during the race weekend in the No. 77 Team Zakosi Data Backup Star Mazda car. During the 2011 season, Veach also competed during the final two rounds of the Star Mazda Championship. He secured a third place podium finish at the final race of the season at Mazda Raceway Laguna Seca.

Veach, a 17-year-old from Stockdale, Ohio, finished fourth in the 2011 Cooper Tires Presents the USF2000 National Championship Powered by Mazda. He helped Andretti Autosport secure the team championship title for the second consecutive year with one win, five podiums and three pole positions. He also captured the inaugural Cooper Tires presents the USF2000 Winterfest Championship title earlier this year with two race wins. In 2010, Veach finished fifth in the overall USF2000 driver championship points, despite starting the season two races behind the rest of the field.

Away from the track, Veach stays active as a spokesperson for FocusDriven, an advocacy group for victims of motor vehicle crashes involving drivers using their cell phones, has campaigned for Oprah Winfrey's "No Phone Zone," and even created a phone app to fight texting behind the wheel. He also released a book titled 99 THINGS TEENS WISH THEY KNEW BEFORE TURNING 16, where he shared his battle with bullying, which later led to his campaign work for the Cyber Safety Academy's No BULL Challenge.

ESPN The Magazine recently named Veach a "NEXT" athlete in motorsports and is one of CNN's "Intriguing People," as well as being nominated for the Sports Illustrated "Sports Kid of the Year" award.

In addition to Zakosi Data Backup, The Young Marines, ADS IT Solutions, Replay XD, and Arai Helmets are providing additional support on the #77 effort.

Prior to the start of the 2012 season, Veach will wrap up his campaign for the Formula Car Challenge presented by Goodyear Winter Series title heading into the final three events with the points lead at Auto Club Speedway in Fontana, Calif. January 20-22.

"We're always impressed with Zach and how he handles himself both on and off the track. There's no doubt in my mind that he'll be successful again this year as he steps up to Star Mazda full-time. I look forward to watching him move up the field this season."

"I'm really excited to be racing in the Zakosi Data Backup Star Mazda car this season, especially with Sage [Karam] as my teammate again. The time I was able to spend in the car earlier this winter gave me a chance to change my driving style to better suit the Star Mazda car, and I think with a bit more testing I'll be ready to compete for the championship. I would like to thank Michael Andretti, Zakosi Data Backup, my family and the whole team that continues to support me. I can't wait to get on track!"