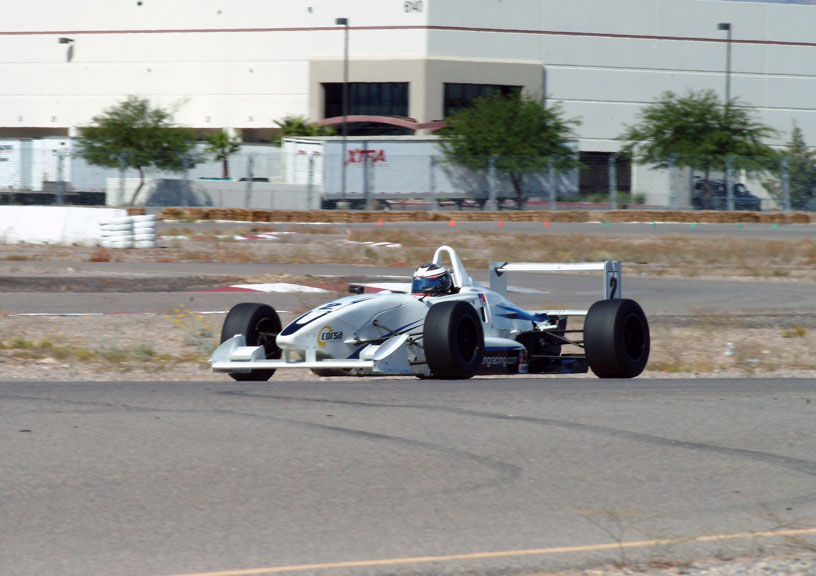 Ford The Pacific F2000 Series Presented by Corsa Car Care held the penultimate race of the season at Las Vegas Motor Speedway as part of the Vintage Auto Racing Association, Silver State Challenge event with the season finale to be held Sunday. In addition to the 2-liter cars this weekend, the Pacific Formula F Super Series, it its inaugural season, will hold rounds seven and eight.

Driving for PR1 Motorsports, David Cheng collected his third consecutive victory, coming off back to back wins at Infineon raceway in rounds 9 and 10.

During qualifying which was held under sunny skies with temperatures in the mid seventies, Conner Ford took his Les Schwab, Western Nevada Supply, Keniston, JF Excavating & Grading, PR1 Van Diemen right to the top of the timesheets, picking up right where he left off prior to his two race hiatus. Ford’s lap of 1 minute 25.156s bested PR1 teammate David Cheng by just 0.210 of a second.

ALMS and IndyCar driver Simon Pagenaud driving a PR1 Motorsports prepared Piper DF5 Honda claimed the pole in the Formula F group. It was the first appearance for Pagenaud in the series.

David Cheng took the lead at the drop of the green flag edging ahead of Ford as the cars entered turn one. Cheng held his advantage as the pair began to ease away from the field. The two circulated nose to tail throughout the fifteen lap race each knowing that the tight confines of the 1.940 Las Vegas circuit offered few if any passing opportunities and that the race could be decided by the slightest of errors. Neither driver flinched as Cheng led Ford to the Checkers by .409s.
The battle for third place was just has heated with Les Phillips leading Bob Negron until on lap 8, Phillips came to a halt between turns three and four, the victim of an input shaft failure, which was to put an early end to his season as no spare was available and he would have to sit out Sunday’s final round.

Peter Thomas back from a four race absence took up the chase of Negron closing up to within .2s at the flag with Peter West finishing fifth 28 seconds further back.

The Formula F group saw Pagenaud lead from start to finish taking the Piper /Honda to its first series victory.