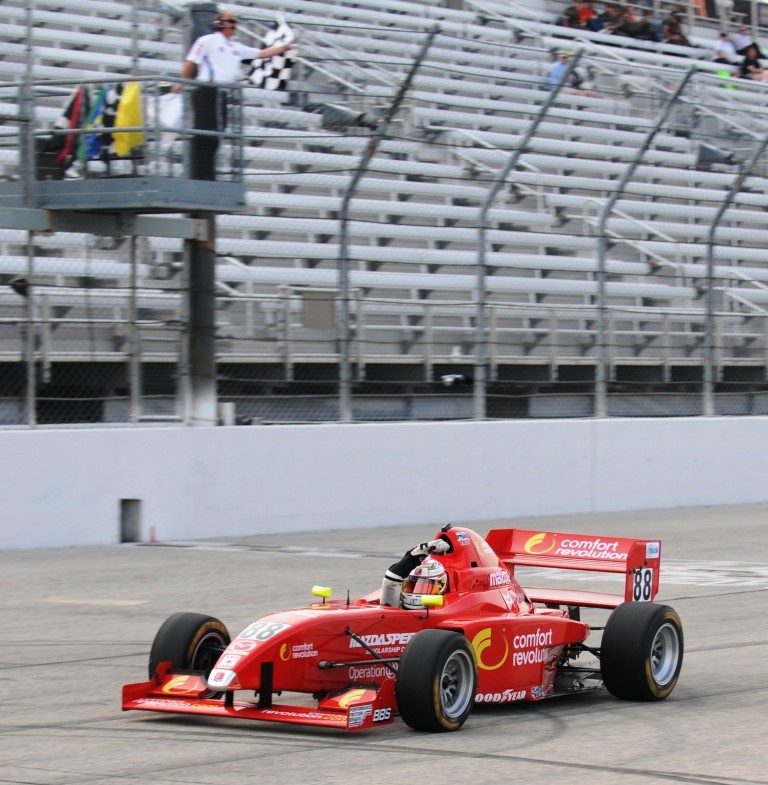 Sage Karam, driving the #88 Andretti Autosport / MAZDASPEED / Comfort Revolution Mazda, led 93 of 98 laps around the Milwaukee Mile to score his first victory of the season in Round 4 of the 2011 Star Mazda Championship presented by Goodyear. His previous best finish was 3rd in Round 3 in the Night Before the 500 at Lucas Oil Raceway at Indianapolis on May 28.

Karam, the 2010 USF2000 champion who moved up to compete in the 2011 Star Mazda Championship presented by Goodyear via a scholarship from the Mazda Road to Indy, started from the inside of the second row, but took the lead on Lap 5 and stretched it to a 13.430 – second margin of victory over Martin Scuncio, of Santiago, Chile, in the #60 Juncos Racing / Bia Comunicaciones / Cable Del Pacifico Mazda. He also turned the fastest lap of the race in the process, 27.763 (131.614 mph). Pole-winner Nick Andries, of St Petersburg, Florida, claimed the final podium spot in his #81 Team Pelfrey / Lithionics Battery / GS610 Brake Fluid / Trademark Garage Floors Mazda.

Early morning rain storms pushed the 100-lap event, which had been scheduled to run prior to the featured IZOD IndyCar Series Milwaukee Mile 225, into the post-race show for the gathered crowd. Drivers agreed, however, that the track was well 'rubbered-in' from the 225 laps of IndyCar action that preceded the Star Mazda Championship race. The principal drama of the evening came in the form of a Lap 14 crash involving Jérimy Daniel in the #26 Daniel Racing / FixAuto / Sherwin-Williams Mazda. The yellow flag lasted eight laps, with the field returning to green-flag racing on lap 22. The re-start provided the one opportunity Andries had to re-gain the lead, and he dove under Karam in Turn 1, with the duo running side-by-side in Turn 2 before Karam's obviously quicker car re-took the lead.

The final pass of consequence took place on lap 81 when California racer Gustavo Menezes in the #28 Juncos Racing / Truecar / Safety Park Mazda took a run at Andries, a move that cost them both as Scuncio, who started 7th, made a perfectly-judged pass to move into second. Menezes wound up coming home 5th, while French racer Tristan Vautier, who came into the race leading the championship, finished 4th in the #5 JDC Motorsports / Cecibon / Circuit du Laquais Mazda. Connor De Phillippi, the only two-race winner so far this season, started from the outside of the front row in the Team Pelfrey / Justice Brothers Products / Trademark Garage Floors Mazda, but handling problems saw him slowly drift back through the field to finish 6th.

With his second 4th-place finish in a row, Tristan Vautier, who won from the pole in Round 2 at Barber Motorsports Park, actually stretched his lead in the championship battle; he came into the Milwaukee race with just one point separating him from Connor De Phillippi, who won Round 1 at the Grand Prix of St. Petersburg and Round 3 at the Night Before the 500. Now they are separated by 5 points, 151 vs. 146. Nick Andries is in third with 139 points, Martin Scuncio moves up to fourth with 136 and Sage Karam climbs to fifth with 131 points.

The next race on the 2011 Star Mazda Championship schedule is Iowa Speedway, with IndyCar, June 23 – 25. Sage Karam won from the pole at Iowa in the 2010 USF2000 race, so he has to be considered the favorite going in, but anything can happen on an oval. Other top contenders with Star Mazda experience on the Iowa banking include Brazilian racer J.V. Horto in the #18 Juncos Racing / Programa LeilÃµes Mazda who finished 3rd last year; Connor De Phillippi who finished 4th, Nick Andries who came home in 6th and Tristan Vautier who finished 8th.

On-track action at Iowa Speedway begins with a 3-hour test session on Thursday, June 23, followed by 45-minute practice sessions on Friday, June 24 and Saturday, June 25. Single-car qualifying will take place from 2:30 – 3:15 on Saturday afternoon, with the 100-lap / 1-hour Round 5 of the 2011 Star Mazda Championship presented by Goodyear scheduled to take the green flag at 4:15 pm Saturday.