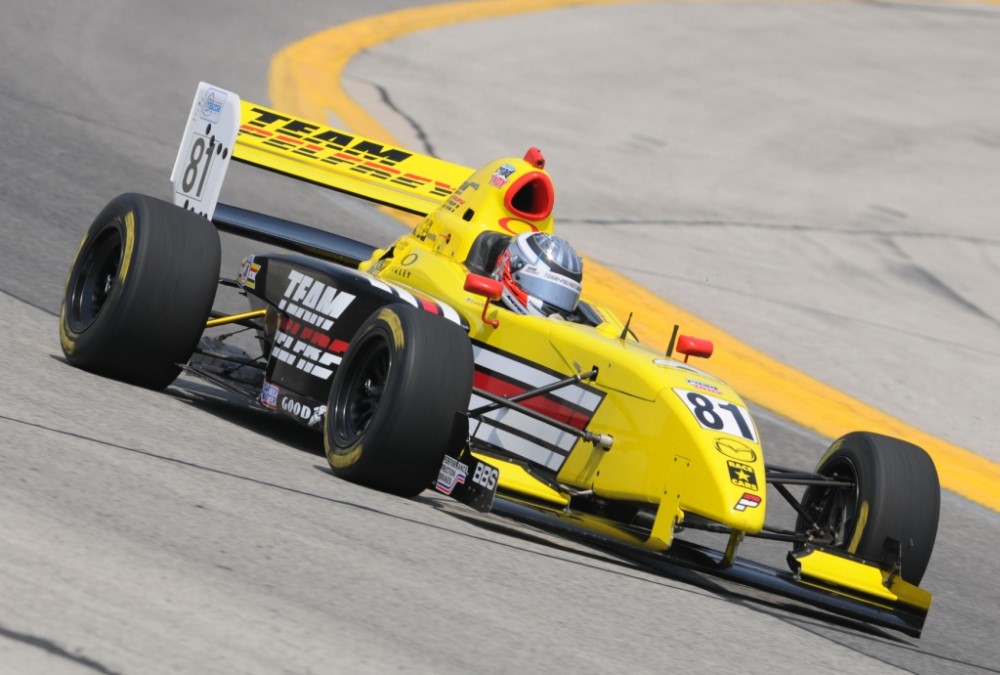 It was in the opposite order last time, but for the second oval in a row, Team Pelfrey made it an all-yellow front row for the start of tomorrow's Round 4 of the 2011 Star Mazda Championship presented by Goodyear. In today's qualifying, Florida racer Nick Andries — who finished 2nd in Round 3 at the Night Before the 500 and turned the quickest time in practice yesterday — put his #81 Team Pelfrey / Lithionics Battery / GS610 Brake Fluid / Trademark Garage Floors Mazda on the pole with a 27.269 (133.998 mph), just 2/100ths of a second off the official Star Mazda track record at Milwaukee, a 27.249 set by Adrian Carrio in 2006.

"I can't say I expected to win the pole because it's a very competitive field and you need to work at it every lap that you're on the track," said Andries. "That said, it wasn't a complete surprise; I was quickest yesterday and even though we struggled a little bit with the balance of the car this morning, Connor was the quickest so we had something to work from. The track is very grippy from all the IndyCar and Indy Lights rubber they've put down over the last two days, but it was hotter this afternoon than we'd seen before so it was a little greasy and it seemed like a couple of the guys might have been a bit looser. We're in the best position we can be going into the race, and since it's difficult to pass here, being in clean air with no traffic should help us open up a lead… and then all we need to do is keep it."

Sitting next to him on the front row for the start of tomorrow's race will be his teammate, California driver Connor De Phillippi with a lap of 27.272 (133.479 mph) in the Team Pelfrey / Justice Brothers Products / Trademark Garage Floors Mazda. De Phillippi, 2009 Skip Barber Pro Series champion and 2010 Mazda Road to Indy scholarship driver, won the final race of the 2010 season and has won twice so far this year, in Round 1 at the Grand Prix of St. Petersburg and in Round 3 at the Night Before the 500 at Lucas Oil Raceway at Indianapolis.

And the pairing of top oval Star Mazda competitors expands to a quartet when you take into account that 2010 USF2000 champion and 2011 Mazda Road to Indy scholarship driver Sage Karam both qualified and finished 3rd at the Night Before the 500 – and will start third at Milwaukee with a lap of 27.375 (133.479 mph) in the #88 Andretti Autosport / MAZDASPEED / Comfort Revolution Mazda. Karam topped the times during Star Mazda testing at Milwaukee on Thursday and has been at the sharp end of the time sheets throughout. And founding out the fierce foursome is French racer Tristan Vautier, the current championship points leader who finished 4th at the Night Before the 500 and qualified on the outside of the second row today with a lap of 27.530 (132.728 mph) in his #5 JDC Motorsports / Cecibon / Circuit du Laquais Mazda.

Rounding out the top-5 is California racer Gustavo Menezes, a top international kart racer who made the jump directly to the Star Mazda Championship at the start of the 2011 season. He has been quick in practice and will start from the inside of the third row for tomorrow's race with a lap of 27.643 (132.185 mph) in the #28 Juncos Racing / Truecar / Safety Park Mazda.

The conditions for qualifying were hot and humid, with just a slight breeze blowing across the track from turn 3 to turn 4. Drivers expressed surprise that the track had 'rubbered up' quite as much as it did, and all were experiencing various levels of understeer (the desirable setup for an oval), which the exception of Karam, who set his time sprint-car style with an oversteering car.