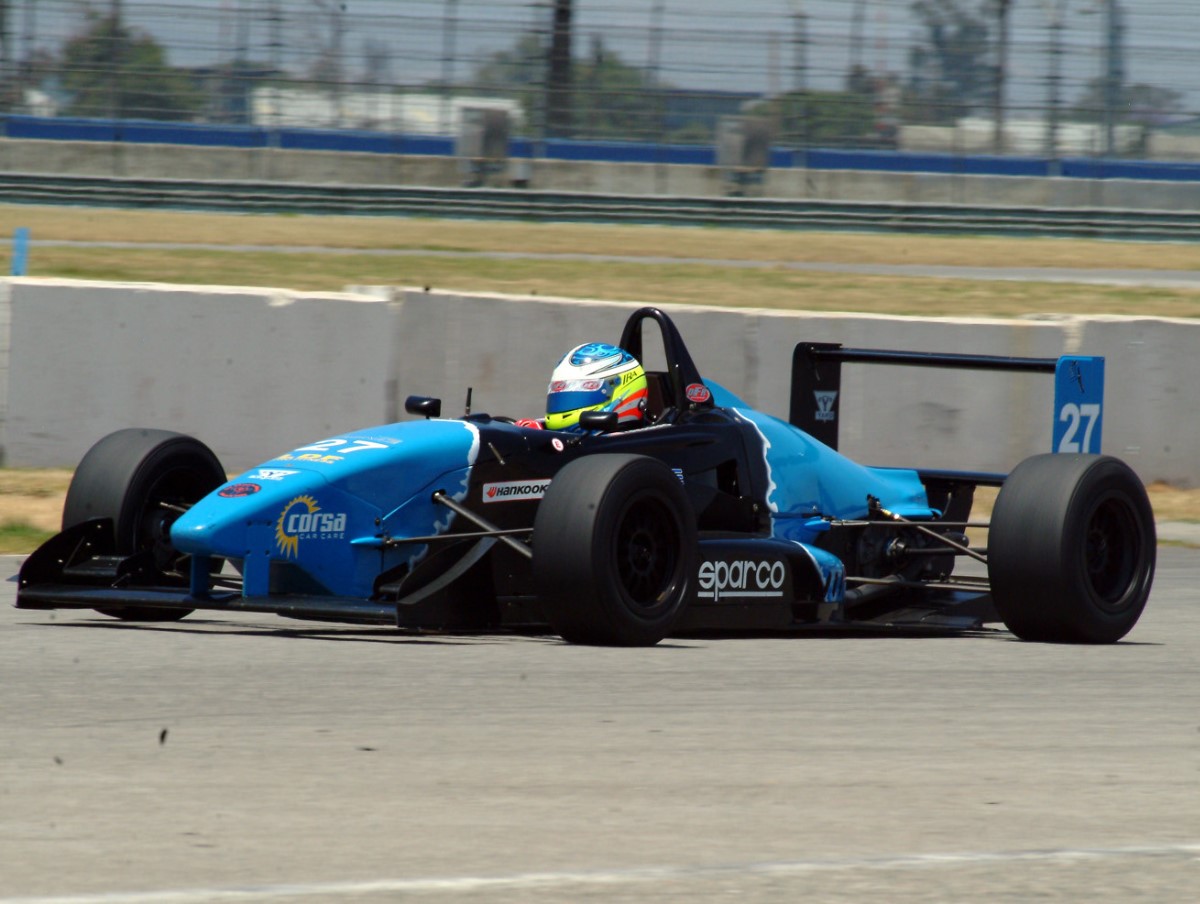 Round six of the Pacific F2000 Series Presented by Corsa Car Care at Auto Club Speedway in Fontana began much as the day before with overcast skies and cool temperatures. It soon warmed up as the cars hit the track for qualifying and a fierce battle raged between Ira Fierberg, Barry I. Goldstein, CPA, Sparco, DFR Van Diemen and Conner Ford, Les Schwab Tire Center, Western Nevada Supply, Keniston, JF Excavating & Grading, PR1 Van Diemen, that was finally settled on the last lap of qualifying with Conner taking his fifth pole of the year by a mere 0.083 of a second with a 1m39.612s lap.

The field took the green flag and headed on the long run to the first corner where they all managed to get through save for Peter Thomas who was a little early on the power and spun himself to the rear of the field. As they filed through Conner held a slight advantage over Fierberg, Kuntze, Cheng, Negron, West, Hastrup and Thomas.

Ford and Fierberg eased their way ahead of the rest and staged a furious battle with the cars mere inches apart at several points on the track with neither driver holding a clear advantage. Lap after lap the car circulated nose to tail until on lap eleven Ira having a good run out of turn nine and with a long run to the braking zone for turn twelve managed to clearly overtake Conner for the lead, a position he would hold to the end scoring his second series win and second Expert Class victory of the weekend and setting the fastest lap of the race to put an exclamation point on his weekend.

Ira later exclaimed, “I knew we were going to be strong, so my only worry was avoiding a first corner crash. After that, I just pushed Conner as hard as I can and tried to put as much pressure on him as possible. I managed to pass him at the end of the back straight, which I think caught him off guard, and then it was just a matter of putting my head down and driving clean laps."
With two laps remaining Conner spun in turn 12 dropping him to third having taken a long time getting the car re-fired and just nipped Kyle Kuntze at the flag. Kyle drove another strong race and finished in fourth.

David Cheng drove a steady race to finish second and earned the Hard Charger Award, a nice recovery after his Saturday DNF.

Following Cheng were Peter Hastrup, Peter Thomas, Peter West and Bob Negron having suffered an early spin, then losing the draft was unable to make any progress.
The series takes a mid-season break before rounds 7 and 8 at Buttonwillow Raceway Park, September 3 & 4.

Fontana, Calif. (June 11, 2011) – The Pacific F2000 Series Presented by Corsa Car Care arrived at Auto Club Speedway in Fontana for rounds 5 and 6 and was greeted with morning overcast for the first session of the day. It was the first appearance at Auto Club Speedway for Conner Ford and Rookie Kyle Kuntze, who had a fine podium finish in his last event, and it showed in the morning warm-up times with the two being fifth and ninth respectively with Ira Fierberg, Barry I. Goldstein, CPA, Sparco, DFR Van Diemen, taking the morning honors with a lap of 1:40.430 followed by Bob Negron, Feng Shui Me Baby.com, Van Diemen, Peter Thomas, Refrigeration Control Co., Hytech Exhaust, Church Automotive Testing, PR1 Van Diemen and Les Phillips, Swiss Implants, Porterfield Brakes, Mygale.

By the time qualifying began it appeared that Ford, Les Schwab Tire Center, Western Nevada Supply, Keniston, JF Excavating & Grading, PR1 Van Diemen and Kuntze, Oktane Visual, Acceleration Kart Racing, Wiener Racing, DRF Van Diemen had gotten things figured out as they moved to the head of the time sheets with the youngster from Carson City taking the pole with a time of 1:39.853 and Kyle just .345 back as they were set to lead the field for the start of round five.

By race time the overcast had burned off, the drivers set off under sunny skies with Conner taking the lead from the start demonstrating the kind of domination that has vaulted him into the series points lead. Though he was never headed Kyle Kuntze managed to provide some pressure through the opening stages of the race and slowly dropped back but still finished less than four seconds behind for an excellent second place finish in only his fifth outing, and Ford taking his third consecutive victory and gaining maximum points by also taking the fastest lap.

Phillips maintained his third position through the opening lap followed by Cheng, Negron, West, Thomas, Hastrup and Fierberg, Ira having an early spin after having picked up a couple of places.
On the second lap Cheng misjudged his braking while trying to defend his position and punted Phillips into a spin dropping Les to the rear of the field and ending David’s race on the spot with damage too severe to continue leaving Thomas in third, having gotten by Negron, chasing the leading duo. Phillips managed to continue until lap 10 when his engine expired.

On lap 4 Fierberg began a drive that would net him not only the race’s Hard Charger Award, but the Expert Class win and third place on the podium. He began by overtaking both West and Hastrup on lap 4, then in a daring move swept by both Negron and Thomas in turn 3. Once in third he continued to press on finishing just over 15 seconds off the lead and well clear of the fourth place Thomas.
Negron finished fifth followed by Peters’ Hastrup and West who were having a grand dice with positions changing nearly every lap eventually settling in Hastrup’s favor.