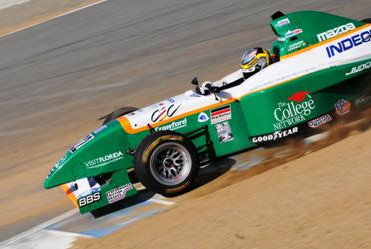 As has become his habit of late, Indianapolis racer Conor Daly set the fastest time during two 40-minute practice sessions as the Star Mazda Championship presented by Goodyear geared up for Round Three of the 2010 season this weekend at Mazda Raceway Laguna Seca. Turning a lap of 1:21.395 in his #22 Juncos Racing / INDECK / The College Network / Merchant Services Ltd. / Tom Lange Co. Mazda, Daly completed something of a hat trick over the past few weeks.

Not only did he win Round Two in the Grand Prix of St. Petersburg, meaning he comes to Mazda Raceway Laguna Seca this weekend as the championship points leader, but he also set the quickest time in two days of testing at O'Reilly Raceway Park in preparation for next weekend's Round Four, the 'Night Before the 500." And in the middle of it all, he managed to graduate from Heritage Christian High School on May 14.

"There a lot going on right now, but I'm learning to take what energy I can from it, and put the rest away in a compartment in my mind and focus on each day at the track," says Daly, who finished 4th in this event last year on his way to a 3rd-place finish in the championship. "The Juncos Racing team is running really smoothly right now, we hit our setups early and I always feel comfortable in the cars they give me. These next two weeks are going to be a dream for me because I'm confident we can do well at this track, and then it's on to the first oval of the season… in my home town, in front of all my family, friends, sponsors and classmates. It's going to be a blast."

Setting the second-fast time, in the first session of the day, was Tristan Vautier who won the season-opener at Sebring driving the #38 Andersen Racing / Moulin TP / Cecibon / Circuit du Laquais Mazda. His 1:21.864 was just under half a second slower, but there's plenty more to come from this quick young Frenchman. Daly and Vautier were the only two drivers to crack the 21s in the first day of practice; third quick was Anders 'The Viking' Krohn, who won on the Milwaukee Mile last year and finished 6th in the championship. Changing teams in the off-season, he sat on the pole at Sebring, has scored two top-5 finishes and is third in the points battle coming into this weekend. He turned a lap of 1:22.076 driving his #47 Andersen Racing / Norse Cutting & Abandonment / Trallfa / Colosseum Mazda.