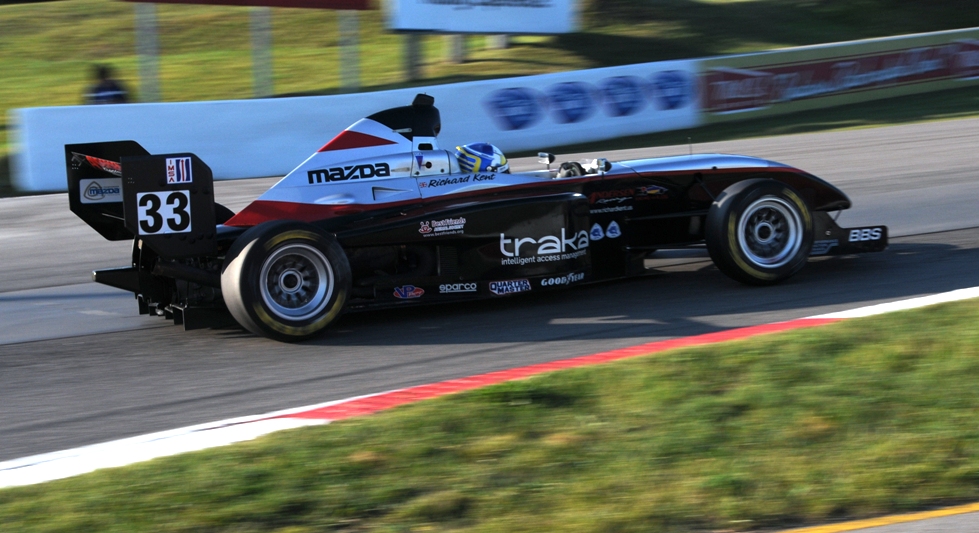 On a day turned from gloom to glory, Englishman Richard Kent, who won the pole in morning fog and rain, converted his advantage to a dominating race win in Round 11 of the 2009 Star Mazda Championship presented by Goodyear at Mosport. In doing so, he became – along with Peter Dempsey and Adam Christodoulou – one of only three multi-race winners so far this season driving the #33 Andersen Racing / Traka Allied Interior Products Mazda. Kent, who has started from the pole four times this so far this season – the most of any driver – also won from the pole in Round 5 at New Jersey Motorsports Park.

"I was pushing hard right from the start and my win was a combination of a good car and good luck," said Kent. "I made a small mistake in turn 5b that allowed Conor to pass me on the outside in turn 8 and I wasn't able to close the gap. When I saw the nose of his car disappear into the grass in Turn 10 about mid-way through the race, I knew the race was mine. Its been an off-and-on season for me, but hopefully this will give me some momentum headed into the final two races and give me a shot at the championship."

Finishing second after a spirited drive that saw him start from the outside of the front row, move into the lead, spin and fall back to third, then make a daring pass in the closing laps, was Conor Daly in the #22 Andersen Racing / College Network / Indeck / Cytomax Mazda. Daly, the 2008 Skip Barber Pro Series champion, is racing in Star Mazda this season courtesy of the MAZDASPEED Motorsports Driver Development Ladder scholarship. Finishing third, after qualifying fourth, was Adam Christodoulou in the #11 JDC Motorsports / Molecule / Alpinestars Mazda. This result was little short of miraculous given that he suffered two major crashes in practice on Thursday.

Peter Dempsey, the championship points heading into the race, retained his lead – albeit a slimmer one – with a 4th-place finish in the #3 Juncos Racing / The Collection / Motorsport Ireland / Queyside.ie Mazda. And rounding out the top-5 was another stellar performance, Scandinavian racer Anders Krohn, the winner on the Iowa Speedway Oval, who worked his way up through the field from his 13th spot on the starting grid in the #27 Mundill / Trallfa / Colosseum Mazda.

Carrying the flag for Canada and Toronto, Ontario fans was native son David Ostella who, like Christodoulou, suffered a major wreck in Thursday testing. The AIM Autosport crew put together a 'Frankenstein' car with bits and pieces from several vehicles to get him back on track and after qualifying 17th in the #71 AIM Autosport/Global Precast Mazda, he rewarded them with a 10th-place finish. Louisiana racer Alex Ardoin, winner of Round 10 at Trois-Rivieres, qualified third in the #51 JDC Motorsports / Oral & Facial Surgery Center / Twister Trailer Mazda and was a major factor in the fight at the front early on in the race until a spin dropped him to 10th at the finish.

Master Series racer (drivers 45 and older) Gerry Kraut put in a superb qualifying performance in the wet morning session to line up 9th on the grid in the #55 JDC Motorsports / Dougherty & Co. / Dougherty Funding LLC Mazda and won his class is his return to competition after a several-race hiatus. Japanese racers Toshihiro Deki, currently leading the Expert Series Championship (drivers 30-44 years old), scored his third in-class victory of the season driving his #80 Mazda for a new team, Juncos Racing.

With the outcome of this weekend's race, Peter Dempsey remains in the championship lead with 399 points. Adam Christodoulou closed the gap from 10 points to seven and now has 392. Conor Daly moves from fourth to third in the championship with 342 points and Joel Miller, who started 7th and finished 12th today due to a mechanical problem with his #2 Andersen Racing / Fader Higher Productions / eSoles / Doug Mockett & Co. Mazda, drops from third to fourth with 336 points. Alex Ardoin remains in fifth with 301 points. A win in the Star Mazda Championship is worth 44 points, and with 90 points up for grabs in the remaining two races (88 plus one point each for pole), eight drivers remain mathematically in competition for the championship. The 2009 season wraps up with a final pair of ALMS races; at Road Atlanta on September 25 and at Mazda Raceway Laguna Seca on October 10 – a race Richard Kent won in 2008.