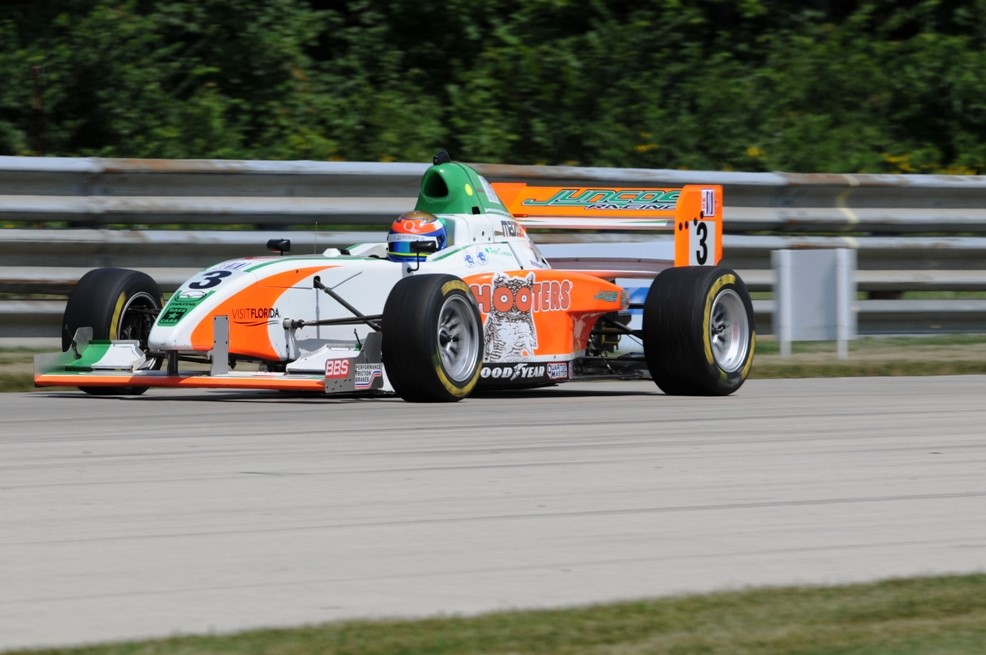 Peter 'The Irish Steamroller' Dempsey has re-confirmed his nickname with a dominant win from the pole in the Harrah's Autobahn Grand Prix of Mazda. This achievement is all the more remarkable when you consider the path he has taken; after winning four races in 2008, including three in a row, only to finish third in the championship, he returned in 2009 and scored his first win of the new season at Virginia International Raceway with AIM Autosport. Forced by economic circumstance to change teams just before the first of two oval track races on the 2009 schedule, he finished 4th at the Milwaukee Mile and won from the pole at the Iowa Speedway, not only his first oval track win but also an emotional first victory for the fledgling Juncos Racing team. To that already impressive total, he adds being quickest in every practice session at Autobahn, winning the pole and leading every lap of the race. He is currently the only driver in the series with three race wins so far this season.

"For me the race was always going to be tough because I knew Adam (Christodoulou) and Conor (Daly) were wanting to make a fight of it; they're both hot young drivers coming up the ladder and extremely talented," said Dempsey, who also won the Racing for Kids prize that includes a $500 donation to the Provena Children's Hospital in Joliet, Il. "For me, it was just about getting off the line and getting my head down and getting to the race pace I knew that we could run at. The car never missed a beat all week and when it came time to race, Juncos Racing gave me the car to do the job and I did it. Right there at the end of the race with about four laps to go the team was saying 'yellow, yellow, yellow' into my radio and that was the last thing I wanted to hear because I was so comfortable up front. I was a bit disappointed, but I knew once I got a good re-start that I had the pace to pull away. A lot of credit goes to the Goodyear tires which got back up to temperature straight away and I was able to run my fastest lap of the race on my last lap."

As for the rest of the top-3 podium, one need only look at the qualifying sheet; Adam Christodoulou qualified and finished second in the #11 JDC Motorsports / Molecule Mazda; Conor Daly, the 2008 Skip Barber Champion and winner of the MAZDASPEED Motorsports Drive Development scholarship, qualified and finished third in the #22 Andersen Racing / College Network / Indeck / Cytomax Mazda.

Save for a 'moment' between the two as Daly got a run on Christodoulou and attempted an ultimately unsuccessful pass during the green/white/checkered finish that resulted from a late-race full-course yellow, the principal drama was seeing how big a lead Dempsey could build over his closest challenger – the answer being 4.9-seconds.

With the results of today's Race 1, Peter Dempsey, who came to Autobahn leading the championship by nine points, extends his lead to 14 points over Adam Christodoulou (297 vs. 283). Conor Daly moves into third place with 248 points.

"I had a really bad qualifying, only got one lap because of all the red flags, so I ended up way in the back," said Guasch, owner and founder of Molecule Labs, a company that produces a line of protective chemicals that is changing the way racing professionals care for racing suits and protective gear. "But I got a really great start, came up on a couple of guys on the inside, then a few guys hit each other and went out so I was able to gain four or five places at the start. I settled into my pace and rhythm and wound up finishing 13th overall and beating not only all the Masters but all the Experts as well. The JDC team gave me a great car and it was one of my better races, so I'm looking forward to qualifying again later this evening and racing again tomorrow."