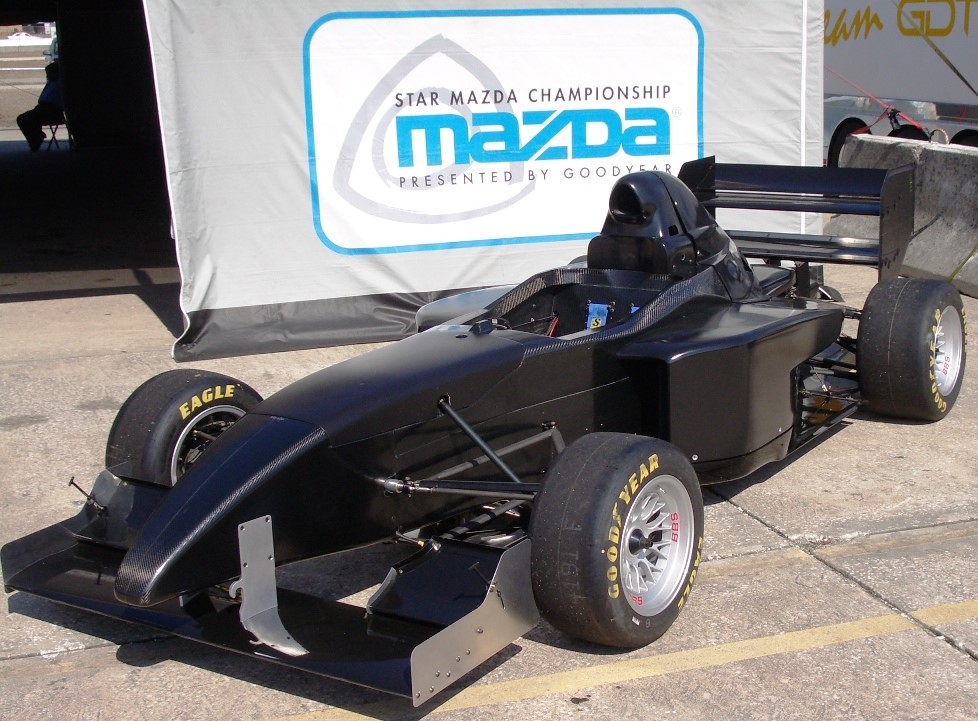 In the first major upgrade of the Star Mazda 'Pro Car' since its introduction five years ago, Star Race Cars today announced that a package of mechanical and software upgrades will be available for the 2009 season.

All upgrades – including aerodynamic and suspension parts, as well as engine mechanical and ECU software modifications – have been implemented in response to requests from the teams themselves; all are designed to increase speed while lowering costs with enhanced reliability and easier at-track setup. All upgrades are optional, not mandatory and are designed to fit all Star Mazda 'Pro Series' race cars built since 2004.

More than 150 of these high-tech, carbon-fiber, rotary-powered single-seaters are utilized by competitors in the Star Mazda Championship presented by Goodyear, as well as SCCA competition and regional Star Mazda series around the U.S., such as the Molecule Formula Mazda Challenge on the West Coast.

Teams competing in the Star Mazda Championship presented by Goodyear will be debuting their newly-revised cars – and newly-signed drivers – at the upcoming ALMS/Star Mazda test at Sebring, January 27 – 28.

The upgrades, including new wings, shock absorbers and suspension rockers, are designed to increase the car's aerodynamic efficiency and top speed while improving engine cooling; in addition, it will be easier for drivers and their engineers to arrive at the best setup for each track. The cumulative effect of the upgrades will be to increase both top speed and cornering speed, reduce maintenance costs and enhance the mechanical reliability of what is arguably already one of the most dependable, cost-effective open-wheel cars in competition today.

"Our mission when we created the original tube-frame Star Mazda race car twenty years ago, and again when we introduced the carbon-fiber 'Pro' car in 2004, was to give racers the 'most bang for your buck' open-wheel racing in North America, and we've achieved that," says Star Mazda founder and President Gary Rodrigues. "This is obviously not the financial environment in which to make wholesale and gratuitous changes – nor have we. These changes have been asked for by the teams, or are in response to some outside suppliers ceasing production of some parts. In every case we have worked long and hard to make the updates optional, interchangeable and as efficient and cost-effective as possible. Car owners can phase in the updates whenever they choose and the fully-upgraded car will be faster, more satisfying to drive and less expensive to maintain over the course of a season."

Star Race Cars will have all these parts available in time for the IMSA/Star Mazda Championship test at Sebring January 26 – 28. Technical experts from the Star Mazda Championship, as well as engineers from Ohlins, Quartermaster and other technical partners involved in the upgrade program will be on hand to bring teams, engineers and drivers up to speed as quickly as possible.

Testing for teams and drivers in the 2009 Star Mazda Championship begins with a one-hour session from 1 – 2 pm, Tuesday, January 27. And additional one-hour session will be held from 4:30 – 5:30 pm. There will be three one-hour sessions on Friday, January 28; 8 – 9 am, 11 – 12 am and 2:50 – 3:50 pm. In addition, Star Mazda Championship officials have announced that – in order to accommodate teams who need additional test time for upgraded cars or newly-signed drivers, an extra day of testing will be available in the week leading up to the season-opener at the 57th Annual 12 Hours of Sebring, March 18 – 21.

1) Wings – Aluminum wings are replaced with carbon fiber wings that are stronger, of much higher quality and, in the event of damage on track, are more likely to be repaired rather than replaced. The new design permits reduced drag, reduces chassis pitch sensitivity and increases cooling. The front wing has been raised about an inch to reduce damage from curbing and to increase cooling to the engine, thereby helping to prolong engine life and reliability. In addition, the rear wing has been reduced from four elements to three, thereby lowering cost. Availability of spares will be improved. Parts in this section are considered optional, but must be used "all or none." Mixing generations of aero parts will not be allowed.

2) Shock Absorbers – This change was mandated by Ohlins discontinuing their single tube damper. The new TTX36 is more affordable (about 25% less expensive) and the more robust design will lower maintenance costs. The new shock offers low-speed compression and rebound adjustments, as well as external adjustments that provide a large tuning window and minimal ‘cross-talk’, making it easier and less time-consuming for the driver and engineer to hit the car's 'sweet spot.' The new dampers will be considered optional, but must be used in complete car sets if used.

3) Suspension Rockers – With the switch to radial tires in 2008 and a different damper package for 2009, these new-geometry rockers will improve the overall handling performance of the car and reduce the time and cost of engineering setup at the track. These are also optional and may be used with original or new-spec dampers.

4) Front Toe Adjusters – The front toe-links have been modified to accept an adjuster which will make adjusting the suspension alignment easier and more precise. These are optional.

5) Pushrod Ride Height Adjusters – Similar to the front toe-link adjusters, these will also provide the race teams with a better adjustment mechanism. Whether the adjustments are made on pit lane or the setup pad, this will allow quicker tuning and more repeatable adjustments. These are optional.

6) Rear Upper Camber Block – This allows an increase in the camber adjustment window, reduces rear bump steer and reduces setup time at the track. These are optional.

7) Engine Upgrades – Updates to the Renesis rotary engine are optional "running changes" due to manufacturing changes by Mazda. Dyno testing revealed little performance increase but did demonstrate increases in service life, fuel economy and overall engine reliability. Re-designed and stronger clutch mechanisms will increase reliability and service life. ECU mapping will be specific to the number of fuel injectors used in the configuration. The motor must have the ECU map compatible with the intake used.

Changes to the engine mapping will make 'hot re-starts' easier and more dependable, allowing the driver to get going again after an on-track spin or incident without needing a push or tow truck. Increasing the rev limit by 300 rpm, from 8,300 to 8,600, will reduce cycling the intake valve and make the 'short' stack of gears more widely applicable to the circuits run by our series, thereby reducing gearbox changes.