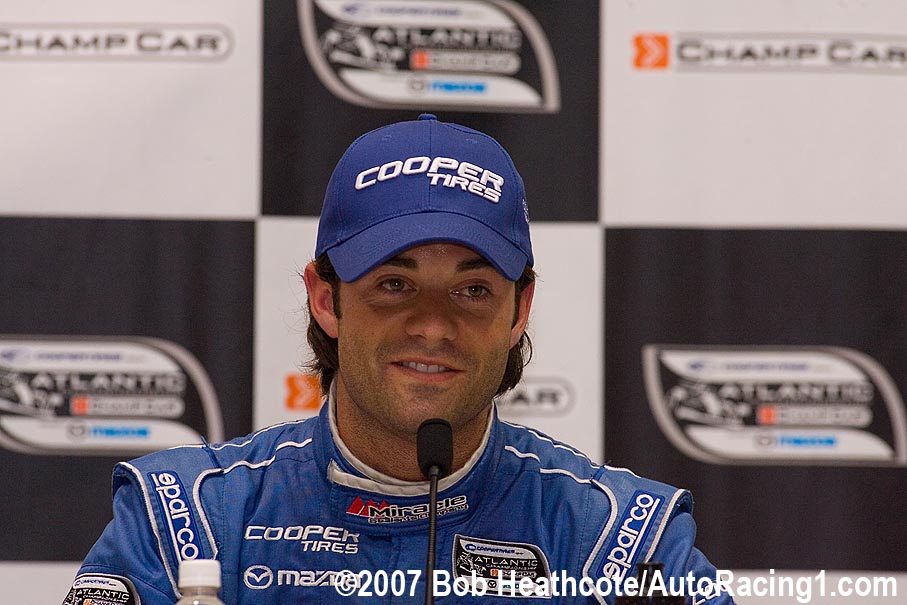 The return of Jonathan Bomarito to the cockpit of a Cooper Tires Presents The Atlantic Championship Powered by Mazda car could not have been more triumphant, as the Californian closed out his first test in the No. 26 machine for Mathiasen Motorsports atop the time charts at the end of two days of activity at MSR Houston.

Bomarito posted a best lap at 1:19.007 (109.357 mph) in Wednesday’s morning session and the time held up through a windy afternoon session. Bomarito also posted the fastest time among 19 cars in testing on Tuesday. It was the first test session for the Atlantic veteran since an open test at Sebring International Raceway in early February, when Bomarito drove for Sierra Sierra Enterprises, which has since decided not to compete in Atlantic. Ironically, Bomarito’s would-be Sierra Sierra teammate, rookie Dane Cameron, was also quickest in his first test with Genoa Racing in Spring Training at Mazda Raceway Laguna Seca earlier this month.

“It was overall very productive," Bomarito said. “Today, the car ran flawlessly and we were able to go through a bunch of changes and get a feel for the team and the engineering. We were really quick, and everything was just good as far as getting to know the team. Everybody got along well; it’s a good bunch of guys. I just have to thank the Mathiasen team for giving me the chance and I’m hoping we can put something together here in the next few days to make sure we’re in Long Beach."

Second-quickest in the two-day team test was Carl Skerlong in the No. 29 PCM/USRT machine with a lap at 1:19.577 (108.574 mph). Skerlong—who is set to embark on his second year of Atlantic competition—also posted the second-quickest time of Spring Training. He is joined by Frankie Muniz on the two-car team, and is working with championship-winning engineer Burke Harrison and driver coach Lee Bentham, who won the 1998 Atlantic title.

“Overall, it was a good test," Skerlong said. “The team chemistry is really building well. Burke Harrison and Lee Bentham are amazing, and I really have to thank everybody at PCM/USRT. It was a good couple of days. To end the test in the top three again is a good feeling, especially going into Long Beach. I can’t wait to get back out there in a few weeks when it counts."

Third-quickest was Canadian rising star James Hinchcliffe in the No. 3 Forsythe Racing Inc. machine with a lap at 1:19.695 (108.413 mph). Hinchcliffe led the Sebring test last month but he and the team were baffled by a mysterious problem that plagued them both at Spring Training and the early portion of the MSR Houston test. Nevertheless, he and new teammate David Garza are both enthusiastic about their prospects for a good season.

“I was kind of disappointed with this test, because we struggled with the car all week," Hinchcliffe explained. “But we finally found something this afternoon that was holding us back both at this test and at Laguna Seca a couple weeks ago. I guess it’s bittersweet in the sense that we weren’t as quick as we wanted to be, but at least I think we found what the problem is and we can get it fixed and be back on the pace at Long Beach. I was actually surprised to have a top-three time, which is even better considering that we were having problems."

Garza wound up fourth-quickest with a best lap at 1:19.704 (108.401 mph) in the No. 7 Forsythe Racing Inc. machine. American Alan Sciuto completed the top five with a lap at 1:19.714 (108.387 mph). With testing now complete, the drivers and teams will shift their focus to the start of the 35th Anniversary season of the Atlantic Championship, which gets underway on the weekend of April 18-20 with the Toyota Grand Prix of Long Beach.