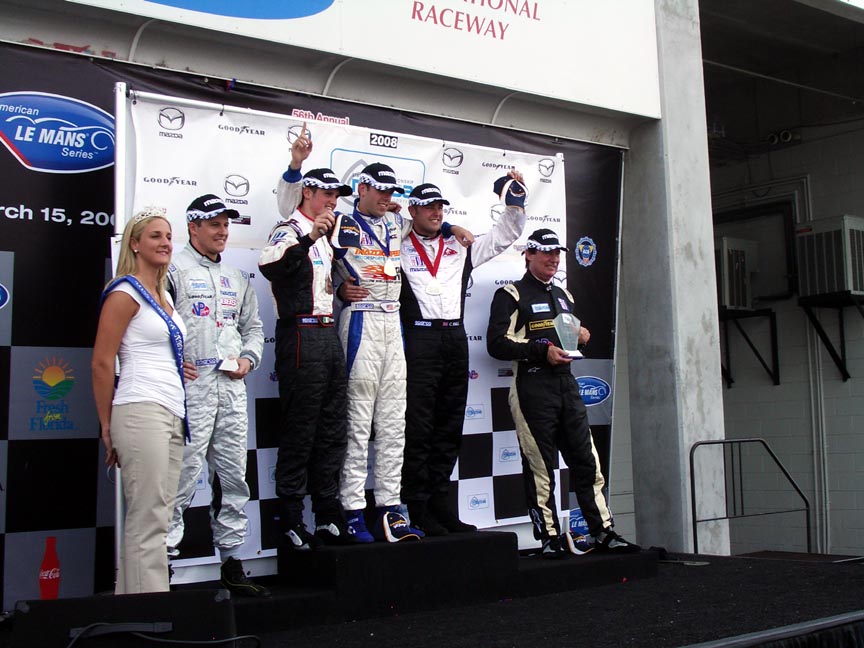 Joel Miller, the new Rocket Rookie of the Star Mazda Championship presented by Goodyear, checked out to a 6.6-second margin of victory in his first race driving the #20 JDC Motorsports/Skip Barber/K&N Mazda. Finishing 2nd was the #2 qualifier, Charles Hall of Sheffield, U.K., at the wheel of the #77 Andersen Racing/Pardoes Solicitors/Allied Mazda. In 3rd was Irishman Peter Dempsey, piloting the #21 Andersen Racing/Allied Mazda, who moved up from his 6th-place qualifying spot.

Winning the Expert Series (for drivers aged 30 to 44) was Vancouver, B.C.’s Chris Cumming who qualified 18th in his #16 World Speed Motorsports/Inviro Medical Mazda and finished 17th overall. Winning in the Master Series (for drivers 45 and older) was Chuck Hulse of Yorba Linda, California who qualified 21st in the #12 JDC Motorsports/Silicon Salvage Mazda and moved up to finish 18th overall. The top-finishing female racer, of the three in the 27-car field, was rookie Kristy Kester, the distaff half of the unique Kester Racing brother/sister duo. Kester, from College Station, Texas, qualified 11th in the #48 Kester Racing/Texas World Speedway/Unifirst Mazda and moved up to finish 8th overall in a remarkable first race.

“First of all I have to thank Mazda and the MAZDASPEED Motorsports Driver Development Ladder for the sponsorship that got me this ride," said Miller, a native of Hesperia, California. “Also JDC Motorsports and my engineer Rick Cameron for a flawless car. The only problem in the race was one I caused by bobbling the standing start just a bit, allowing Charles Hall to get ahead of me for the first two turns. But I was able to pass him in turn 3 and it was clear sailing from there. I don’t expect to win them all, consistent top-5 finishes is how you win a championship, but it sure tastes sweet to win in my first-ever Star Mazda Championship race."

Round One of the 2008 Star Mazda Championship presented by Goodyear, though a substantial demonstration of young (and not so young) driving talent and the reliability of the Mazda Renesis Rotary engine, was a remarkably low-drama affair that went green the entire way with only a few bobbles in the series’ first-ever standing start – along with a couple of spins and one or two minor bumping incidents that were cleared with local yellows. Aside from watching a high-caliber driving demonstration by Miller, the primary entertainment was the intermittently tight battle between Hall, Dempsey and 4th-place finisher Alex Ardoin the Lafayette, Louisiana driver of the #51 Mundill Racing/Oral and Facial Surgery Center Mazda. Dempsey finished 1.416 seconds behind Hall, but Ardoin, who won the final round of the 2007 Star Mazda Championship at Mazda Raceway Laguna Seca and finished 6th in the championship, crossed the finish line less than 2/10ths of a second behind Dempsey.

Rounding out the top-5 was the youngest driver in the field, 17 year-old Tom Gladdis of Gibraltar, U.K. Gladdis, in the fast group throughout practice earlier in the week, qualified 9th in the #5 Andersen Racing/Law Firm of Marrache & Co./Allied Mazda and moved up through the field in the closing laps. Nick Haye, a resident of Huntington Beach, California and veteran of the 2007 Star Mazda season who finished 4th in the championship battle qualified 4th in the #4 JDC Motorsports/Quantum Sphere/All-Star Ice Mazda. He ran in 4th for most of the race, but slipped back in the closing laps to finish 6th.

Retirements of note include Brazilian driver Ernesto Otero, who put his #18 JDC Motorsports/Brazilian Green Beef Mazda third on the grid but got into a terminal wheel-bumping incident with another car on lap 3 and was knocked out of the race and relegated to a 26th-place finish. Yannick Hofman, resident of both Canada and France, ran two Star Mazda races in 2007, finishing 5th in his home-province event in Trois RivierÃ¨s, Quebec. That experience put him among the front-runners in practice, but he qualified 10th in the #00 Andersen Racing/Jig-A-Loo/Pep Boys Mazda, stalled the car on the starting line and then damaged his front wing in a perhaps optimistic passing attempt. Two laps in the pits for repairs before re-joining the fray left him in 25th at the finish

So, although Joel Miller dominated Sebring with a convincing demonstration that he is stepping surely and swiftly down the path blazed by his JDC predecessor, and 2007 Star Mazda Champion, Dane Cameron, it is equally apparent that 2008 will be a hard-fought season in the Star Mazda Championship with a rare diversity of drivers and depth of talent.

That talent will be displayed again on the SPEED TV broadcast of the Star Mazda Sebring race, scheduled to air Sunday, March 30 from 3 to 4 pm. For additional information about Star Mazda race broadcasts, log on to www.speedtv.com/programs.

Due to the Champ Car/IRL ‘unification’ and the subsequent cancellation of what was to be the next race on the 2008 Star Mazda schedule – the Grand Prix of Houston – the next event on the schedule is two months away, on May 17 at Miller Motorsports Park in Utah.