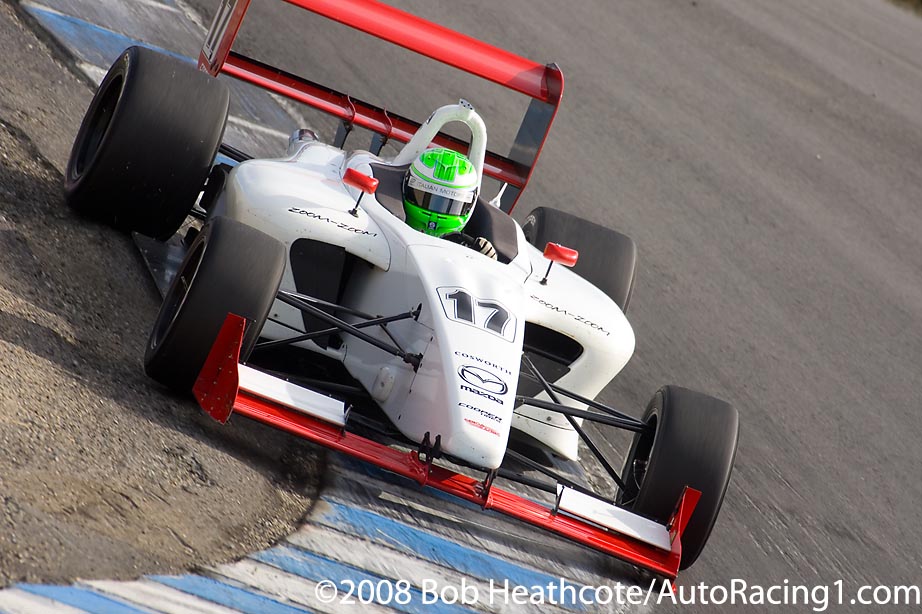 It didn’t take long for rookie Dane Cameron to adjust to his new surroundings with Genoa Racing, as the rookie racer from nearby Sonoma, Calif. posted the quickest lap in the first day of Spring Training at Mazda Raceway Laguna Seca for the Cooper Tires Presents The Atlantic Championship Powered by Mazda.

In the second of the day’s two test sessions, Cameron posted a lap at 1:16.465 (105.366 mph) in the No. 17 Genoa Racing machine to top the time chart. It was Cameron’s first test day with the Genoa Racing operation, as the 2007 Star Mazda champion joined the team for Spring Training after the original Atlantic team with which he signed for 2008, Sierra Sierra Enterprises, elected to discontinue its Atlantic program. Cameron was quick to point out that the impressive team couldn’t necessarily be attributed to the fact that he makes his home just a few hours up the road from Mazda Raceway Laguna Seca.

“For a guy being from Northern California, I don’t have as much experience here as you would think," Cameron explained. “The first time I was here was actually this Atlantic series test here last year. I did the two days here with Polestar and then didn’t come back until the end of the year and did the (Star) Mazda race here, the season finale. We qualified on pole and finished second in that race. That’s not a ton of time, but I’ve been here once before and that was definitely an Advantage in making the adjustment to a different team. I had a good idea where the track went. I had to obviously refresh myself on the differences between the two cars, which are pretty great. It allowed me to focus more just working with the team. I think it’s going really well. All the guys are working really, really hard. Everyone seems to be working really well together. It’s been really positive and really good so far."

Second-quickest on the day was Carl Skerlong in the No. 28 PCM/USRT entry with a lap at 1:16.492 (105.329 mph). The second-year Atlantic driver will be working with Atlantic championship-winning engineer Burke Harrison during the 2008 season. Skerlong was obviously pleased with the car that Harrison and the PCM/USRT operation put under him on Monday.

“I couldn’t really ask for a much better test," Skerlong said. “Winning testing is not what we’re all here for, but it is nice to be on the top of the charts at the end of the day. I would have liked to be on the very top, but second is very respectable. I got kind of caught out by traffic there, but that happens in race weekends too. It was a good overall day and everybody worked really well. In its first year back in Atlantics, Pacific Coast Motorsports is looking really strong and I’m excited to be here. We’ve got a great car to start with tomorrow. We learned a lot. We were quicker today than we were at the end of the weekend here last year. We’re definitely a lot further up the charts. It’s looking good. Hopefully we’ll improve on it tomorrow."

Posting an impressive third-quickest time in his first test of the year was Dutchman Junior Strous with a lap at 1:16.580 (105.208 mph) in the No. 6 Condor Motorsports/Team Holland entry. Strous is set to embark on his second year of Atlantic competition as well in 2008 and is looking forward to a pain-free season, unlike in 2007 when he broke his wrist in Round 2 at Long Beach and felt the lingering effects throughout the season. He noted that Monday’s sessions were the first in which he hadn’t felt pain and was pleased with how quickly he and the team were able to work up to speed.

“We had a good first test day," Strous said. “This is our first official test. I’m driving for Condor Motorsports Team Holland and we’ve got two Dutch guys on the team (Dominick Muermans will drive the team’s No. 9 entry). We missed the Sebring test, so we had a bit of catching up to do, but it went quite well. In the morning we were fifth and now we’re third. The car is feeling really good, and I’m enjoying this track. It’s my first day here. I’ve always been playing this on video games and now I’m here driving, so it’s really cool. The team’s just great and everything is going along fine, so I’m looking forward to tomorrow."

Fourth-quickest on the day was Canadian racer Daniel Morad in the No. 70 Eurointernational machine with a lap at 1:16.958 (105.651 mph). Morad won the 2007 Formula BMW USA title and will be a rookie in the 2008 Atlantic season. Third-year Atlantic driver James Hinchcliffe (No. 3 Forsythe Racing Inc.) was fifth with a lap at 1:16.969 (104.676 mph). Whereas the top-four drivers posted their best lap in the afternoon session, Hinchcliffe’s best lap actually came in the day’s first session.

The top 10 drivers were covered by less than one second in the first day of the two-day Spring Training test. On-track activity for the Atlantic Championship gets underway on Tuesday morning at 8:30 a.m. PT, running through 12:00 Noon. The final session of Spring Training will run from 1:00 to 5:00 p.m. The sessions are open to media.

Combined Times and Speeds from Day 1 of Spring Training: