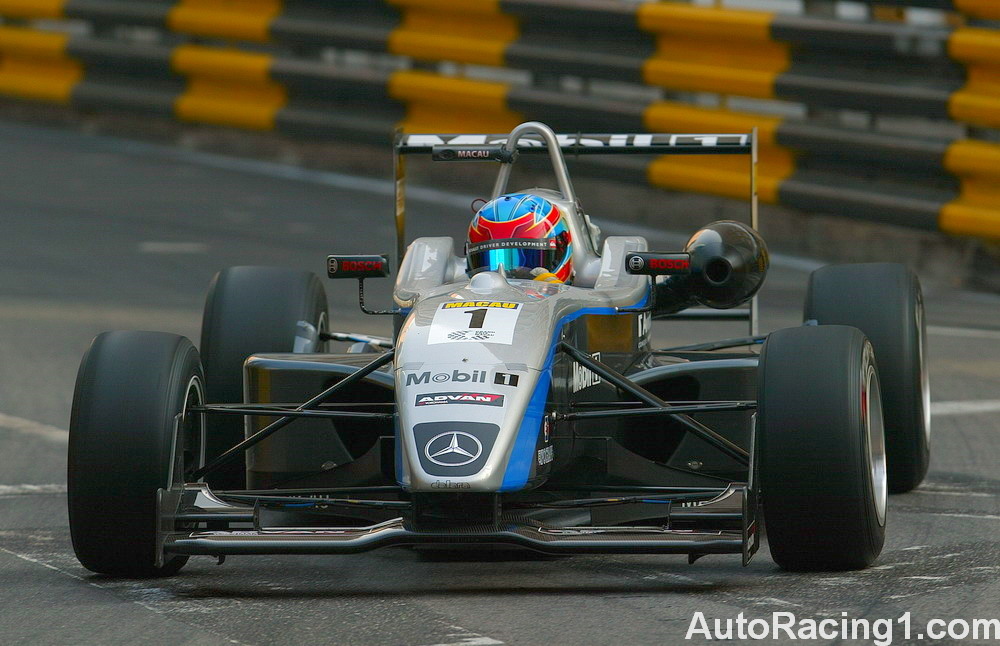 Duval, who started from pole position, lost the lead briefly to Kubica at the start after making a poor getaway, but was able to move back to the front on the run into Mandarin Bend.

He then managed to open up a three second gap by the end of the second lap and, although he lost time late in the race after getting caught up behind a backmarker, he was never threatened after that. He backed off on the final lap when the win was assured. (Photo right, Duval takes the lead by the end of the first lap)

“After the first few laps I was two or three seconds ahead and it was easy to look in the mirrors and see what Robert was doing," said Duval. “It was easy for me to push at the beginning and then it was just a question of keeping three or four seconds ahead."

Kubica, right, said that there was nothing he could do to hold off Duval on the run down to Lisboa and claimed that his focus after that was in ensuring he kept the car in one piece for tomorrow’s race rather than take risks to try and close down on the leader.

“The race went okay, but nobody was pushing as hard as they could," he said. “This was only a qualification race. It is tomorrow that really counts."

Di Grassi, left, had made a good getaway from fourth place on the grid to snatch third off Manor Motorsport team-mate Mike Conway on the run through the first corner. And, despite coming under threat from Conway on lap four after he lost momentum when he made a mistake at the final corner, di Grassi had no problem taking the third spot.

The race was relatively incident free – although Taku Bamba and Cheong Lou Meng were eliminated after colliding as they formed up on the grid. Bruno Senna was the only other major retirement, after stopping on the second lap.