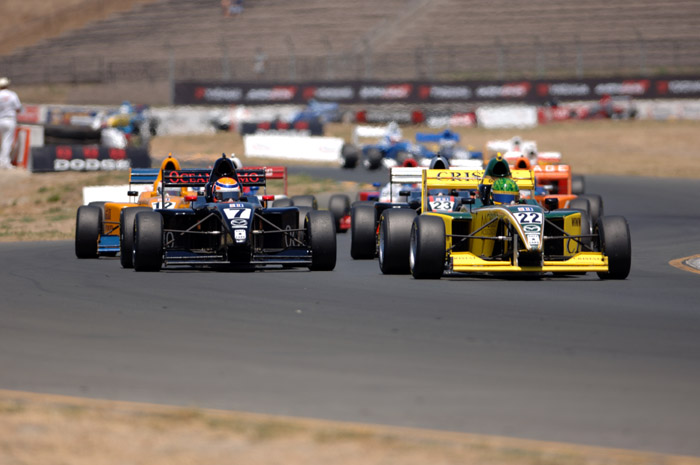 Pablo Donoso, of Santiago, Chile, went wire-to-wire in his Cristal Beer/Andersen Walko Racing Mazda to record his first series victory in Round Six of the Star Mazda Championship presented by Goodyear today at Infineon Raceway. Donoso, under fire from series points leader Rapahel Matos in the closing laps would pull away to a 2.055 second victory over fellow series rookies Marco Andretti and James Hinchcliffe, when Matos suffered a mechanical problem on the final lap.

Donoso, a protégé of former Formula One and IndyCar Driver Eliseo Salazar, credits a computer game with helping him on his first visit to the circuit. "This year is my first season racing in the United States and I have been learning the circuit from a NASCAR game on my computer," Donoso explained. "I would spend several hours a day driving the track so when I got here it was like I already had hundreds of laps on the track." The experience paid off as Donoso was able to hold off the hard-charging Andretti in the early laps and series points leader Matos in the closing laps to capture his first victory in the United States.

The race for the podium became a two lap shootout when the full-course caution flag flew on lap 20 as both Graham Rahal and Phil Saville suffered spins in different locations on the 2.53-mile circuit. The green flag came out once again on lap 23 with Donoso leading Matos by two-tenths of a second with Andretti and Hinchcliffe poised to strike if the opportunity arose. Halfway through the final lap they would get their chance as Matos' Ocean Tomo Racing Mazda suffered a hesitation in turn seven allowing both drivers to slide past before Matos could recover.

Andretti, from Nazareth, Pennsylvania, driving the Vonage/Best Buy/Hersheys MJ Motorsports Mazda, had an inspired drive in the first of two races at Infineon Raceway this weekend, jumping from fifth on the grid to the second position on the opening lap and leading the charge to catch Donoso for much of the event. "We had to make a guess on the setup for the race as we had missed the final practice session yesterday so to finish up here on the podium feels pretty good," Andretti explained. "I could tell something was wrong with Rapahel's car as we came into turn seven on the last lap and we almost hit, but I was able to avoid him and move back into second."

James Hinchcliffe, of Oakville, Ontario, Canada, would finish also work his way past Matos on the final lap to make his first appearance on the podium. "Everybody at AIM Autosport has worked really hard all season to get us onto the podium and after qualifying on pole at Pikes Peak and leading the first sixty laps of that race only to come up short in the final fifteen, it is nice to come back with a podium," Hinchcliffe said. "The Emexis Racing Mazda was working great today and I'm looking forward to the race tomorrow."

Despite his brief mechanical bobble, Matos, from Belo Horizonte, Brazil, was able to recover and bring his car home in fourth place, one position ahead of his closest championship competitor Robbie Pecorari. "We still aren't sure what happened out there," Matos said afterwards. "We had a similar problem in qualifying and the car the crew had given me a great car once again for the race. I was chasing down Pablo at the end when it cut out on me in turn seven and Marco and James got through, but once I completed the corner it came back to life. It's disappointing to give up a podium but we were still able to increase the championship lead."

Rounding out the top-five for the first race was Aston, Pennsylvania-based driver Robbie Pecorari in the SAI Hydraulics/ Andersen Walko Racing Mazda. Pecorari, the winner of the previous round at Pikes Peak International Raceway, was battling an oversteering car for much of the race. "My car was so loose it was like riding a bull," Pecorari said. "I think we just went too soft with the bar."